A journey is best measured by the friends you make – Melbourne again!

It’s a short hop across to Melbourne, a place I so enjoyed last time. I stayed with lovely Africa friends, Mark and Anna. By the time I arrived it was only time for short late night catch ups to be continued the next day.

My melbourne weekend was quickly panning out to be more about the people than the tourist attractions which I had explored previously. I met Jo, the English girl from my previous roadtrip and we did what we do best, explore bookshops and eat cake. This time we headed to Fitzroy, the fashionable northern suburb. There was plenty of books, antiques and all things quirky to be explored.

Lunch quickly turned to cake, and cake to sitting outside the state library in the sun, absorbing the wet grass into our bums, putting the world to right.

One thing left on my Melbourne list was the Immigration museum, seated inside the old customs building on the banks of the Yarra River. This museum acknowledged Australia’s many influences over the years with Europeans flooding in since discovery and in more recent years the plight of refuges seeking passage here.

The museum explored the many different passages taken over the years as boats grew in speed and size, eventually made redundant by the commercial jet. It was also a shocking recollection of the settlement of Australia, post its convict beginnings. The realities of the ‘White australia policy’ which defined immigration until the 1950’s meant that cheap immigration and incentives were put in place for desirables such as English women and strong young men to fulfil labour work. Later, post war, posters featured the slogan ‘populate or perish’ and policies such as 10 pound Poms were brought into place. This meant a £10 passage for English people, meaning they had to stay for two years. There was no obligation on them to work however, unlike the less desirable immigrants from Eastern Europe, where lawyers and doctors were set to work as labourers. Even then this unpopular and people resented this immigration, however as a growing community reliant on this labour the government continued this immigration policy on the sly!

It was an interesting comment on this policy, many posters attracting the British, stating ‘real British values.’ Examples of packaging and advertising, once acceptable but now considered racist were on display, making you realise how reccently attitudes have begun to be challenged. It is worth remembering at this point Aboriginal people were considered ‘flora and fauna’ of Australia until 1967, so have only been recognised as human beings for just over 50 years!

The museum moved on to a moving exhibition on how we develop an identity, using case studies of people who were Australian born with Asian parents, or Lebanese who could not speak the language having always spoken English. The exhibit questioned how we define others and ourselves.

In the evening Mark, Anna and I headed for Los Hermanos, a fashionable Mexican restaurant. Into town and Friday night was heating up. We went to a few bars before I met up with Perth colleagues Rikki and Jana. Despite it being 8 months since we saw each other last, our gossip catch up continued quickly. Some boys nearby tried to join our conversation but we were too caught up in who’s been where and moved away from them to continue jabbering. The night ended where our first lunch date began all those months ago, Chocolatier San Churro! 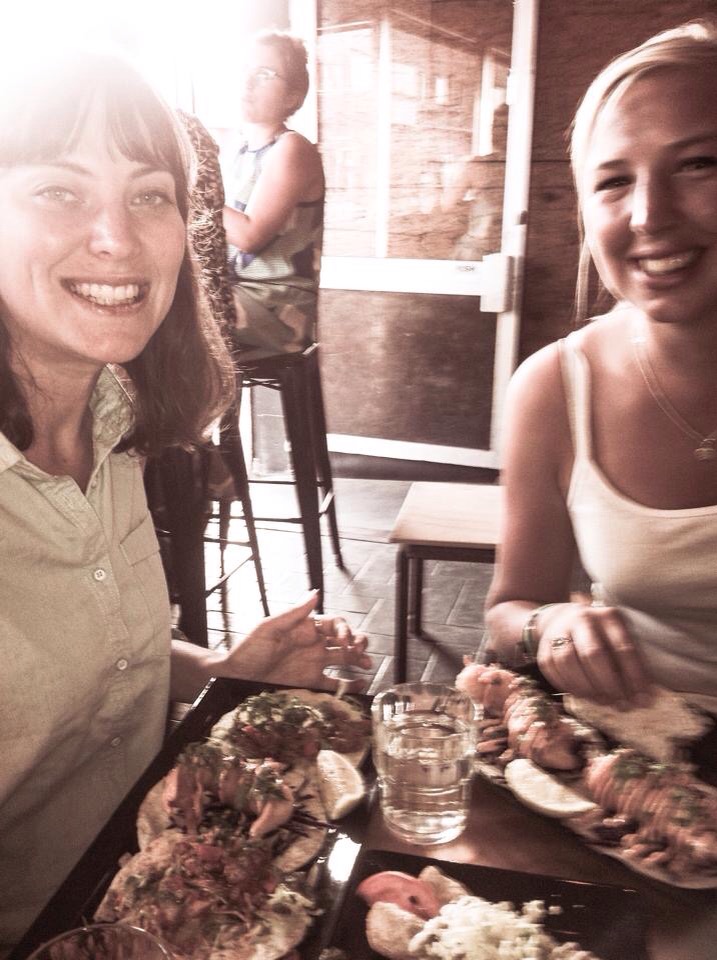 The warm weekend began well as Anna brought coffees and quiches and we sat on the patio, the more lazy of us still in our PJ’s. In fact it was a good start to a lazy day. I had what Jo coined a ‘life admin’ day, but after various jobs, sat in the park and finished my book. I was joined by some of Brunswick’s finest, a group of hairy men dressed in tutus and dresses, frolicking in the pond, joined by a few puppies and a Dalmatian.

In the evening Mark and Anna had friends over for a BBQ which had not one but two deserts, so the best kind of BBQ really.

I was lucky enough to coincide my visit with St Kilda festival, a large free festival at Melbourne’s coast. Who better to share it with than fellow Falls Festival friend, Helen. We spent the day trying to get as many free samples as possible, joining every feasible dance class from Samba to Salsa, Zumba to Disco, and watching some pretty great live music.

The last act we watched was a children’s magician who kept us entertained for nearly an hour with ridiculous slapstick humour, however we appeared transfixed.

I crossed town hurriedly to meet Africa friends Laura and Ashlea to head to dinner for another Africa reunion. Far from organised on my behalf, Emma and Titch had been trying to organise to meet the girls for nearly 6 months, such was the timing of my visit. It was great to catch up. We had all started out tours together in Johannesburg, sharing the first 13 days, however all ended in different places as the trip split three ways at Victoria falls, hence the dinner was a catch up of tour gossip and reminiscing.

It was a hasty morning for changing plans. I was booked on the overnight bus to Sydney that night however that morning I got a call from a farmer, about 1.5 hours from the city asking if wanted more farmwork, to start the very next day. Unable to turn down work I made a few preparations and felt rather overwhelmed!

Lucky my only other engagements for the day was to meet my lovely roadtrip ladies, Leah and Jo. Through lots of sunshine, chocolate and chatting, I felt much happier! In conversation I referred to plans for the next week as ‘long term’ making us all giggle about how unpredictable our lives have become!

So next stop Yarra Valley for the newest fruit being added to my CV, Blueberries!