Back to the Island

Still below the 49th parallel but firmly in Canada, we were now in Victoria, capital of BC.  The 90 minute ferry journey had seen us meet a lovely couple celebrating their 50th wedding anniversary.  Our customs welcome was far friendlier than it had been upon entering the US.  The Victoria roads provided us with another challenge and we were pleased to park Raven up for the night and set out on foot.  On exploration by night, this city sparkles.  The parliament building glows with thousands of light bulbs and reflects on the calm waters of the harbour.  All of this is best enjoyed with an ice cream. 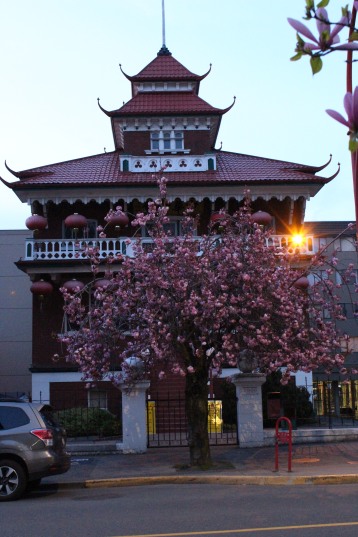 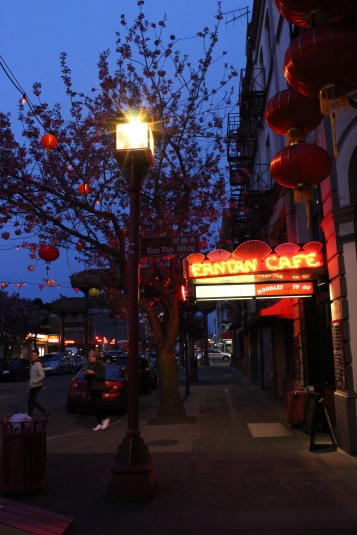 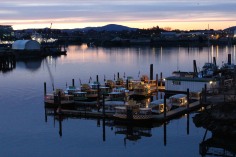 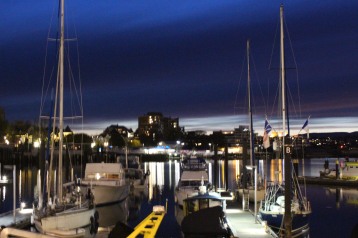 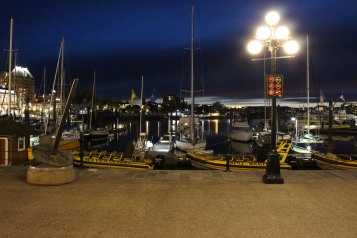 By daylight we continued on, tracing the edge of the water to colourful Fishermans Wharf.  The April cherry blossoms made the picturesque city even more beautiful, fringing the water and Chinatown with pink blooms.  By afternoon we joined a tour of the Parliament,  the seat of BC.  Many of the traditions of parliament are borrowed from the UK and make little sense now they are removed so far from the motherland.  With regal symbols mixed in with a little BC flavour, the parliament has a feeling of history, but also looking to the future.  As we were guided around the building, the guide talked a lot about how Canadians are beginning to look at their past and their future as first nations culture is represented and respected.  With over a third of the recognised surviving first nations languages, BC is playing a big part in this discussion. 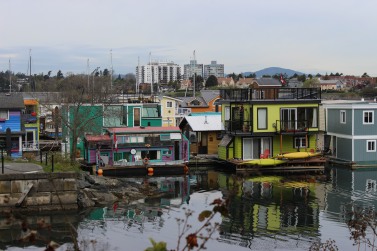 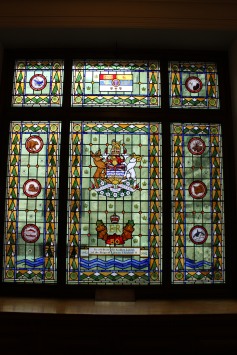 We explored Victoria’s quirkier side in Chinatown, where it has the feel of Brighton or Wellington, a hipster mix of independent shops and many cultures.  Amongst the footfall were many stops for coffee, bubble tea and ice cream.  Just in our short stay in the hostel we were beginning to get a reputation for ice cream outings.  The final view on the checklist was to cross the Johnson Street bridge and look back at the city.

The road wound out of Victoria, climbing to get a view of the coastline intermingling with the ocean.  We pulled off the highway to detour through scenic Cowichan Bay where a boardwalk of shops and houses met the water.  Our journey took us north, then west across the island where the trees got taller and denser in MacMillan Park.  As we neared the opposite coastline, the roads encountered more challenging geography and often circumnavigated rocky cliff faces.  The challenge of road improvements to the popular destinations of Ucluelet and Tofino negotiate with the space available and make for a journey of low gears and plenty of bends. Finally, early evening, we arrived to Tofino. 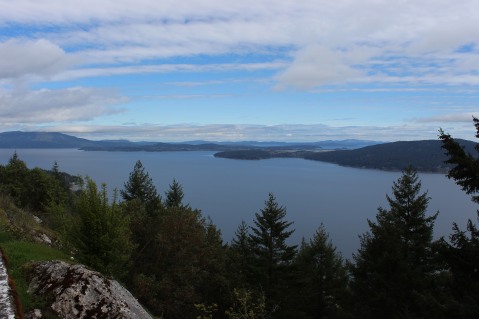 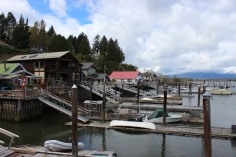 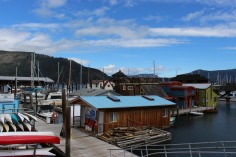 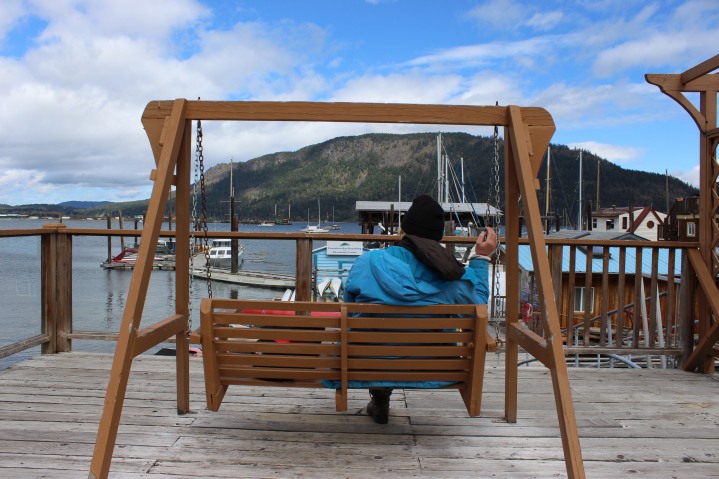 It was a wet greeting and set to be a wet couple of days, however we were in rainforest and it wasn’t going to stop us.  We got out at Coombers beach and walked the short distance to the beach, only to be greeted by lots of hungry ravens feasting on a dead sea lion, not another soul in sight.   The West coast was displaying its famous palette of grey shades and the waves were kicking up some exciting splash to watch.

The next day was much the same.  We explored the town coffee shop to coffee shop, discovering a first nations art gallery along the way.   Further out of town we watched surfers enjoy the surf at Chesterman beach, a more beginner surf spot.  Just a short distance further, Cox Bay was where the more advanced surfers played and it was easy to see why.  Huge waves collided with the rocks making for an exciting walk along the beach.  Being April, this summer tourist spot was mellow, the famous Tacofino food truck had no queue, but easter weekend promised to change all of that.  For the rest of the stormy evening, we enjoyed a game of pool and watching the waves from the big window in our hostel.

Ucluelet, the little sister of Tofino, boasted more bakery stops, more cute shops to peruse and a short hike to Half-moon bay just outside the town.  The descent to the coastline was down some well used, wonky wooden stairs that emerged into a sandy bay which made the perfect picnic spot.  We had fun dodging the tide as it rose, threatening to splash us as we explored the rocks. 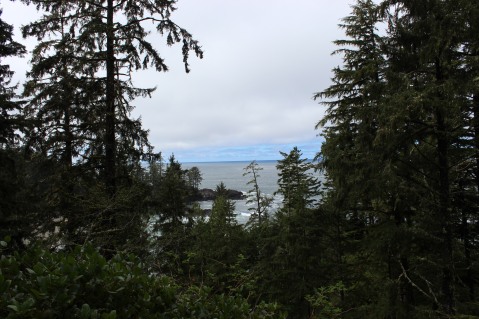 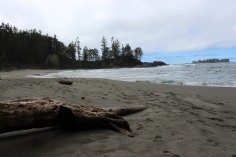 Whilst the west coast was changeable, the middle of the island was wet and the east coast felt tropical.  We retraced our steps across the island west to east, heading to Courtenay for a quiet spot to spend the long weekend.  Our accommodation was out of town, set in fields and forest where endless trails became the playground.  The next day we walked through the forest to Seal Bay Park which emerged at the oceans edge.  Just a short hop across the water lay the mainland with its giant snowy peaks.

Natural beauty was abundent, punctuated by quaint towns which had once been a big deal.  In Cumberland, coal had brought people to the area between 1895 and 1924, but the once industrial town was burnt in a fire in 1935 and the population declined rapidly.  The high street is a step back into the world which was forgotten.  The shop frontages are beautiful cladded townhouses now selling coffee and bike goods for the Vancouver Island lifestyle.  Just out of town is the remains of Chinatown, once 2000 strong with a mining workforce who eventually dissipated as the work moved elsewhere.  A short stretch further, we admired the beautiful Comox lake.  We watched as people more energetic than ourselves paddled or rowed across it. 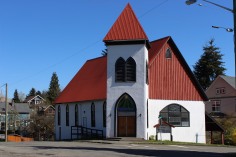 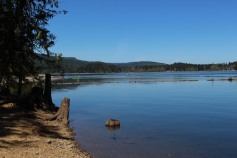 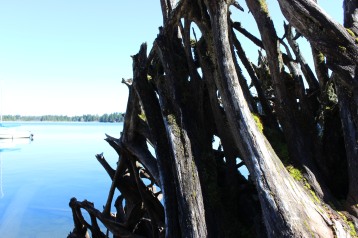 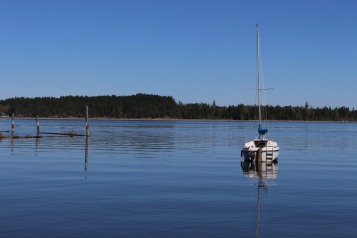 After the easter bunny visited on Sunday morning, we set out for Comox harbour.  The small town hugged the coast and welcomed hoards of sailboats to nestle alongside.  There was walkers, pups and an air show practicing their tricks overhead, so it seemed a great spot to enjoy some fish and chips in the coastal air.  With endless exploring to do, we also discovered Nymph falls hidden in the forest.  Vancouver Island had once again shown off its beauty and it was time to head back to the mainland. 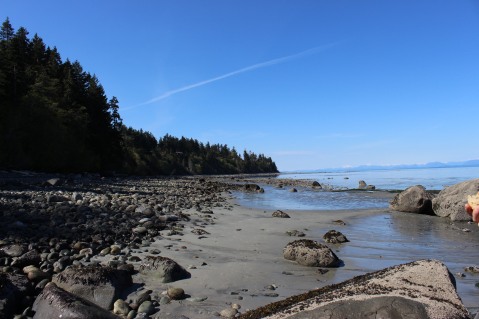 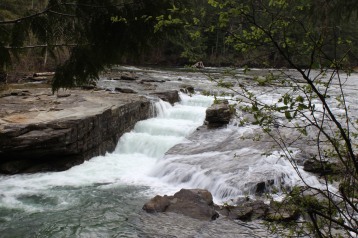