Dublin was my first time touching down in Europe after two years in Canada, and with such a long break comes a fresh perspective, but always such weird observations.  Firstly, there is the people.  Coming from such a sparsely populated land it was amazing how many people there were, even early morning in the airport arrival hall. Next, everything felt small.  I don’t think I had noticed how everything in Canada had grown until I was shrunk back to European sizes.  How do the people fit in the cars? How do the cars fit on the roads?  Why are the traffic lights so short?  The driveways so small?  It was a beauty, but a strange sort of beauty.

Bleary eyed, I took the bus to the city for my first ever adventure in Ireland.  We had landed at 7.30am, but I hadn’t considered I had left my body on Canadian time and it was a casual 3.30am there.  By a large needle, the Spire of Dublin, in the crossroads of O’Connell street in central Dublin met a walking tour with 2 hours to make sense of Republic of Ireland, past and present, a formidable task.

Dublin has a great sense of humour.  It has plaques in the city commemorating complete fallacies that are now excepted and embraced by the city folk, such as the imagined lives of fictional freedom fighters.  The aforementioned needle is also known as “the Stiletto in the Ghetto!’ The river Liffey divides north and south Dublin and brings with it an enjoyable bunch of stereotypes.  The north is seen as more working class and the south, a more anglicised or gentrified accent. 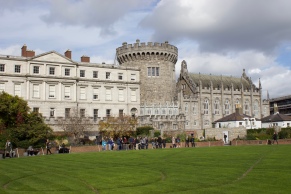 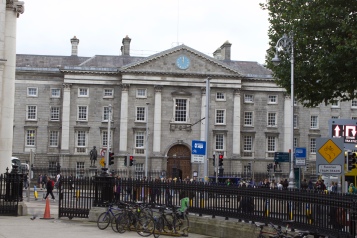 Walking through the city you see the symbols of struggle, particularly the marks of the Easter Rising where 485 people lost their life resisting the loss of a home government.  It began on 24th April 1916 whilst Britain was fighting WW2 and was an attempt to establish an Irish Republic.  Bullet shots pierce buildings and statues showing signs the of heavy suppression which culminated on April 29th.  About 3,500 people were taken prisoner by the British, and 1,800 of them were sent to internment camps or prisons in Britain. Strong opposition to Britain’s reaction to the Rising accelerated the move toward independence, and in the following election the peoples vote was a strong shift towards independence and the creation of the Irish Republic.

Across the river in the south lies many of Dublin’s icons including Dublin’s Trinity College, which has produced some impressive Alumni, including Oscar Wilde and Jonathan Swift, however like much of Ireland’s recent history, is fraught with religious turmoil.  It was founded during the reign of Elizabeth I in 1592 and was a protestant university exclusively until 1793, however it wasnt until 1873 that an act of parliament was to fully forge the restrictions on Catholics.  Difficult pasts and a lively present was found around every corner.

It was interesting to learn a little more about St Patrick, the Patron saint of Ireland who is, among leprechauns and shamrocks, one of your first associations with Ireland. It is actually believed to be an Englishman, and attributed with being the first priest to bring Catholicism to Ireland.  Among the many symbols associated with him, he is said to have used the shamrock to explain to the pagan people about the holy trinity.  Among much other folklore, he is said to have banished all of the snakes from Ireland.  The 17th March was his day of death and is now celebrated as St Patricks day and through Irish immigration worldwide is now widely celebrated, along with many other Celtic symbols which have become tied up to him.

What was truly emotive on the tour was the guides expression of the Irish people, a truly far flung culture with a past of settlement oversees, now a prominent culture in Newfoundland, America, Australia and many more.  The struggles of life at home, whether due to potato famine or economic struggles means that Irish are settled all over the globe.  It was with a sense of poignancy that the guide described a previous feeling of inferiority from the Irish people, one perpetrated through jokes and remarks.  When JFK described himself as Irish American, this began a feeling of determination and pride of the culture that benefitted the peoples view of themselves. 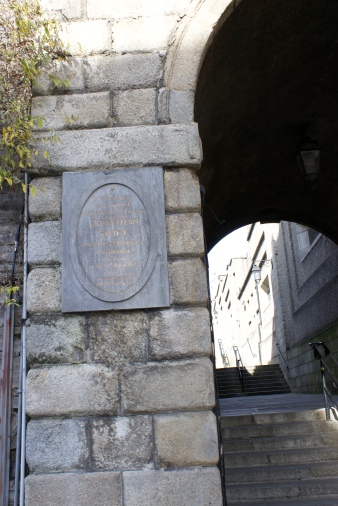 Irelands history with the UK is a long and sad chapter, which is ongoing today.  In 2011, the Queen visit Dublin on the first visit since Good Friday agreement and birth of Republic of Ireland.  She began her speech in Celtic which had a huge impression on the people.  With the difficult question of Brexit very topical, it has different meanings for Ireland and Northern Ireland as there is currently no border crossing.  With NI voting predominantly to remain in Europe, the question is being raised with more and more strength as to whether reunification between these two lands would be possible.

On a short visit, Dublin made a big impression, as I sat quickly in a beautiful cafe on a cobbled street to ponder all that had been discussed.  A place with a difficult history, it appears to embrace life with humour and positivity.

I hope to visit again soon.  Until then, next stop Berlin.