Straight down the middle- Three gorges and Yangshuo

As we left Xi’an we caused quite a stir. At the train station we piled our bags in the centre and all sat around. We soon had crowds three people deep of people staring. Once we got past our suspicions our guide started talking to them and a lot were from Tibet, so we very well could have been among the first westerners they would have seen. They certainly were fascinated with us!

We arrived in Chongqing, China’s biggest city with a population of 30 million. It isn’t really a touristy town however was China’s capital temporarily when Beijing and Nanjing were captured by the Japanese during world war 2.

We went for Chinese hotpot. They have a large gas ring in the centre of the table and they supplied us with a dish of soup, one spicy and one not. You then order meat, veg and dumplings to cook in the soup and just before you eat them cool them in your own pot of sesame oil and garlic.

I came outside to find Ricky having his shoes cleaned by a local seller.

In the afternoon we got a bus to the start of the river cruise. We had a dinner stop in a little Chinese tourist town based on ancient design for Chinese people to escape the cities. It was very quaint in decor. 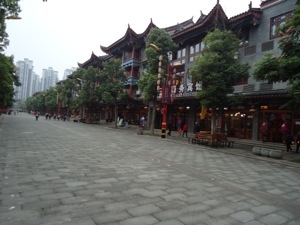 We finally arrived on the boat, this was our room with a view!

We passed through the first gorge at 10:30, the narrowest part of the river with high cliff faces on each side. This part of the river would have been wild and dangerous before the dam was built and the water level used to sit at 70 metres where it now sits at 170.

After lunch the others went on an excursion to the lesser three gorges however we stopped off in the little town and rented a chuckle vision car for £1.20 for the afternoon. They send you off down the road with all the cars, buses and bikes. We used a Chinese flag as an indicator and got plenty of attention from the locals who love to practice their hellos! 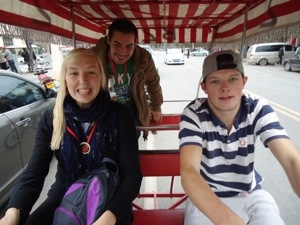 We stopped and climbed up to the higher part of the town, some 300+ steps for a beautiful view over this part of the Yangtze.

Back on the boat we passed through the second gorge at 6:30. This was about 12km long and features on their 10 yuan bill. This part is known for featuring goddess peak, a jut of rock which looks like a figure on top of the gorge, often used as a marking point for traders using this route.

At 8pm the boat itinerary featured free dancing time. As the boat mainly holds Chinese tourists there was a big take up in the ballroom of dancing and karaoke. We took this opportunity to have a few drinks on the roof bar!

The next morning we departed the boat and got the bus to Wuchang passing the three gorges dam on the way. This dam took 17 years in the making. One third of the huge cost was spent rehoming people from the areas which would flood. The area before the dam rose up to 170 metres above sea level which improved trade lines in china as the water maintained a safe level for shipping. The dam also contributes 5% of China’s energy and ensures that Shanghai (only 4 metres above sea level) will never flood.

In Wuchang we stocked up on snacks and enjoyed the sunshine on the river bank before getting the night train to Guillin.

I managed to break my second pair of glasses in two weeks! Some friendly Vikings, our friends Luna and Erik, rayban aficionados, gave me a new pair taking pity on a poor backpacker!

By the time we got off the train the landscape had transformed again. We got the bus to Yangshuo on the way passing rice fields filled with workers in their little wicker hats. There is hundreds of thousands of pinnacle mountains of the strangest shape which fill the skyline. There is also a fog which hangs in the air which makes them seem very mystical as other lime cast mountains appear from nowhere.

Yangshuo is a beautiful little town, now filled with tourism with its little cobbled streets, traditional architecture and position on the river. The river is filled with bamboo rafts and the whole area is picturesque. This is the picture featured on the 20 yuan bill. It has huge colourful butterflies around as well, some with a wingspan I would guess at 8cm! 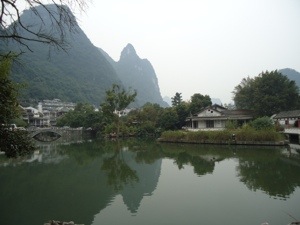 The local dish here is rice noodles, quite different in taste to other noodles as Ricky and I found out for lunch. We then went to explore the markets which line the streets. A few of the street sellers were selling bees wax or solid honey? (very tasty) On one of the nests they had on the side of the street was the killer hornets recently found in Shanxi province (near Xi'an) responsible for 40 deaths! 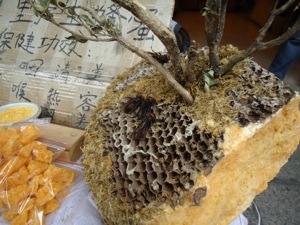 In the evening we had a few drinks on our hotels roof terrace. The mountains are illuminated and there is something so beautiful and mystical about the skyline. The river is also dotted with green lights and the temperature was mild.

We hired bikes in the street (2 for £5 for the day!) and set off out of the town following the river. Our track took us through farms where agricultural workers worked the fields and chickens roamed free. We saw houses drying rice on their front driveway. The sights were stunning.

We picked up some sweet potatoes and bread cakes from a street seller which were yum and so cheap. One of the mountains is named moon hill for its unique shaped hole. As we stopped we met some of our tour who were out on an organised ride and joined them in a very primitive local restaurant for lunch. The dishes were very simple, egg and tomato, beef and aubergine, but so tasty.

In the afternoon I had booked a cooking class along with Jonny and Kerris to learn to cook some of the Chinese dishes. First of all they took us to a farmers market. One side sold vegetables and then had little dishes of catfish, eels, frogs and snails. The other side was more shocking as the centre was full of live rabbits, chickens, geese, ducks, pigeons and then at the back was the slaughter rooms where you could see chickens in half and dogs, dead but whole, hanging on hooks. It was sad and shocking to see! 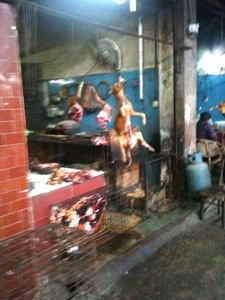 Our cooking class was on a rooftop kitchen in a restaurant and we all had our own workstation. The class lasted 3 hours and we made Kung pow chicken, a spicy aubergine dish and dumplings. The ingredients were all really healthy, but cooked in a lot of oil and seasoning, however all tasted great! The dumplings have a very precise pattern of folding which the teacher said I was top of the class at, so maybe I will have to try them again at home!

After class we caught up with Ricky, Howard and Richard who enjoyed our left over dumplings. Howard had found a local fisherman who had agreed to take us out on his boat to watch the night cormorant fishing. The fisherman is on a raft and had eight birds, all with their necks tied. The birds dive for fish but can't swallow them and at the end of the night they empty the catch into the fisherman's basket. It was incredible to watch although the catch was quite low as it is not in season. Here is Ricky and I holding the cormorant birds. 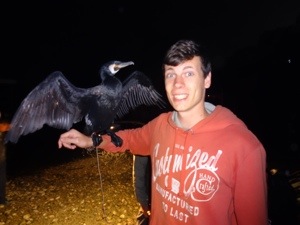 A warm day in Yungshuo. After lunch we climbed one of the pinnacle mountains in the town which had a little structure on top and the view was great. They are so steep and strange in shape like nothing I have seen anywhere else. 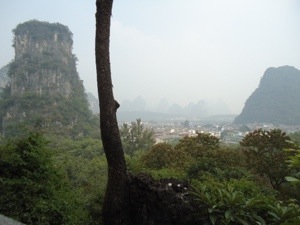 For dinner we ate in a small local restaurant making the most of our last night in China and picking up cheap noodles probably cheaper than a pot noodle back home.

There has been so much to say about China, a culture shock indeed. It is loud always, smelly often. It is busy and crazy but beautiful and interesting and the food is amazing and the our time has come to an end too soon!

We will particularly miss the mistranslations which make everyday so funny! 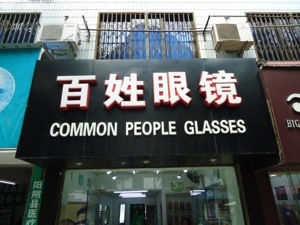 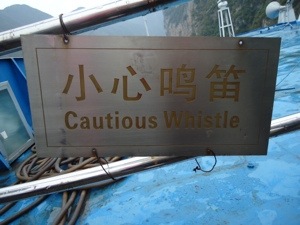