We caught the bus to Phnom Penh, crossing the border into Cambodia with ease. The refreshment break on the Cambodian side immediately introduced us to begging children, a hard thing to experience.

About 2:30 we arrived in Phnom Penh and were swarmed by Tuk Tuks, moto scooters and taxis wanting to take us to our destination. Our hostel is overlooking the river in a pretty setting and after getting settled we went out to explore. The currency here is Riel, it is about 6500 riel to the pound, however they lack trust in their own currency so everything is quoted in dollars. This pushes the price up a bit on Vietnam, but still fairly inexpensive. Phnom Penh is a mix of wide boulevards and little streets filled with vendors and restaurants. The Mekong river runs through the middle. The amazing thing is, also true of Vietnam, these people are so economical, reuse and alter everything yet are shameless about dropping litter even in their own backyard.

We took a walk to nearby Wat Phnom, a Buddhist hill temple on top of a mound. It is a pretty temple with lots of monks walking the grounds, but I guess we are pretty temple tired now.

Our accommodation is very close to the weekend night market so at 7pm we went to join the hubbub of bartering, live music and food in the market enclosure. Although the clothes weren’t quite to our taste, the food part of the market was really good. Lots of stalls lined the outside where you could pick your various noodles, spring rolls and fried delicacies and they would cook it. You then eat on the mats on the floor, festival style. We had battered shrimp, lobster and spring rolls and it was all delicious. 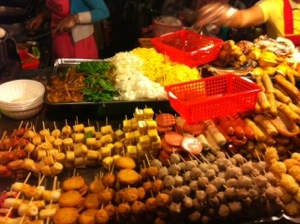 We took a walk to explore further afield and found one of the main intersecting boulevards of the city, a long way down the street was the independence monument built to celebrate independence from France in 1953. The grand statues suit the style of Barcelona or Paris than humble Phnom Penh. We took a Tuk Tuk back picking up some steamed corn on the way, yum!

Today was the day for the unavoidable emotional history of Cambodia. A Tuk Tuk picked us up to take us to the Killing Fields of Choeung Ek, about 16km out of town. In the back of the Tuk Tuk we were soaking up the sun whilst riding through the dust cloud which hangs over Cambodia’s potholed roads.

The audio guide introduces itself as recorded by a man who lived through the atrocities of the Khmer Rouge who descended on the cities and seized power in Cambodia on 17th April 1975. The Khmer rouge were a party with communist ideals, hoping to destroy the old order and create a new regime. They named 1975 as year zero and drove everyone, bar none out of the city to begin communal labour. The party believed in the power of the peasants, the "old people" and distrusted anyone from the city, "the new people." The distressing fact is that due to the Vietnam war, much of rural Cambodia had been bombed, driving people to the city escape. In this brutal regime of three years, eight months and twenty days they killed intellectuals, anyone who could speak another language, people who wore glasses, people with soft hands and their families as enemies of the state. This amounted to three million people in a country of eight million. 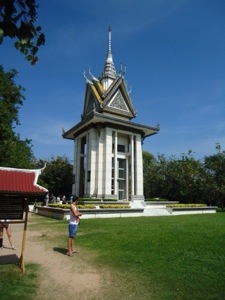 This killing field was one of 300 in the country and told of the trucks turning up from the prison about 3 times a month filled with 60 or so people, gradually increasing until trucks were arriving daily. Bullets were rare and considered an expensive commodity so the brutal inhumanity of this site was unimaginable. Agricultural equipment was used to beat and kill then chemicals such as DDT to disguise the smell of the mass graves. 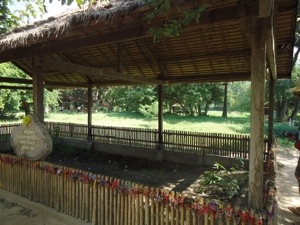 The site is very peaceful, the structural evidence of this site has long been destroyed so the path winds around excavated mass graves and outlines of buildings which were once there. Arguably the most choking thing I have ever seen was towards the end, a killing tree against which they would kill children, believing the motto to kill the grass you must also kill the weeds.. 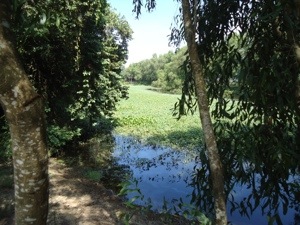 It is unimaginable that this is in living memory for a lot of Cambodian people. What is also shocking is the injustice. The Vietnamese liberated Cambodia on 7th January 1979 and the Khmer Rouge fled. The country fell into deep famine. The UK, America and most of the western world still recognised the KR as the government of Cambodia for long after this, even inviting them to work with the United Nations in a peace treaty in 1991. Pol pot died under house arrest in 1998 and the other four main leaders have ongoing trials in which they still haven't been brought to justice.

Last stop was a memorial housing over 800 skulls and bones found at the site, a powerful ending point. 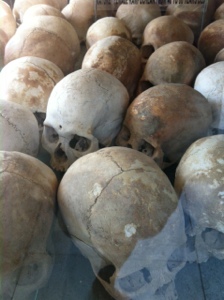 We took the Tuk Tuk back to the city to S21 prison. This would have been where many political prisoners spent time, however we felt we needed the background provided at the killing fields to understand. The prison was originally a school, schools were also banned during Pol pots reign of terror, so it became a prison and torture ground for many caused traitors who would eventually be forced to sign false confessions. Every prisoner was photographed and can be seen inside and when this place was liberated only 7 were left.

There were four blocks and it was chilling to walk around. 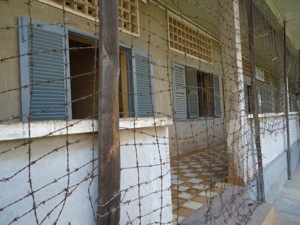 Back in the centre we ate and discussed how little we knew about this awful period. The weather was beautiful to sit out on the river facing boulevard and watch the world go by.

On a slightly lighter note, the last few weeks we have enjoyed realising the perceptions people have of England. When you say your English you normally get one of the following responses,
you love football?
Do you support Manchester United?
Lubbly jubbly
Top banana

Not really sure any of these are true of us, but we are enjoying hearing them..

Not very uplifting blog, sorry! Next up Siem Reap!