No need for a jumper – Kuala Lumpur

Our bus dropped us in Chinatown and we walked to where we were staying, Bukit Bintang. It was 37 degrees and the heat felt like an actual force pushing down on you. When we had freshened up we set about making the most of the benefits of a modern city starting with some western food and an exploration of the big shopping malls on our doorstep. The shopping area is very posh and modern and the blast of aircon you get on the way in is a welcome break from the heat.

We emerged from our hostel a second time at around 6pm for an evening stroll to the KL tower. It was a lovely walk and a very fast 300 metre climb in a lift to the observation deck. The city from this angle looks like it’s from a computer game, the people so small and the strange layout of skyscrapers separated by mountains, by flat, sprawling suburbs. The great thing about this tower is the view includes the famous Petronas Twin Towers. After spying on a few hotels through the powerful binoculars we returned down to ground level and walked back to our area to catch a movie, the Monuments Men. 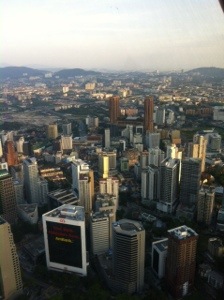 Emerging from the cinema at 10pm the city is still alive, the busy energy that I love about a city. We had skipped dinner and were looking for a snack, diving down a side street by our hostel. Earlier in the day this street had looked dirty and dingy, somewhere you would avoid with not much going on however this place, Julan Alor, transformed by night. The strings of lanterns lit up the sky and the tucked away vendors had spread stalls all down the street serving Malaysian, Thai and Chinese cuisine. The road was packed full of people enjoying their evening meal- quite a transformation. We picked up some delicious street food here and vowed to return.

A bright an early start to catch the walking tour. We caught the free bus to the other side of town, accidentally caught it back again and ended up having a hot walk to Merdeka square. From the KL gallery we picked up a free walking tour of the square which was surrounded by beautiful historic buildings.

Kuala Lumpur actually means "muddy confluence" as it is the meeting point of two rivers, the Gombak and the Klang. The Chinese were the first influence to settle as they boated up the river and the muddy waters forced them to alight their boats at a split in the river. To the East of the river they settled and Chinatown was born. The arrival of the British in started the settlement on the west side of the river, now Merdeka square. 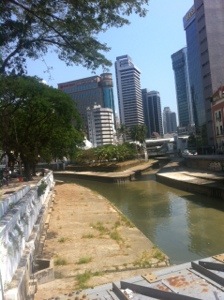 The KL city gallery was once the government printing office. We went from here to the textile museum, once the old railway building. Inside here we learnt about the various textiles and dress of the groups which make up Malaysia.

From here we went to past the old post office to the Sultan Ahdul Samed building which now houses government officials and courts. This building was build to represent the importance of Kuala Lumpur, often overlooked by Singapore. KL's main trade was tin, very profitable at the time until it was forced into decline in the 80's. The building was beautiful, a moorish design.

The whole square gave the feel of high society. The centre of the square was used for cricket and at the top corner, the British theatre. Inside is beautifully decorated in a Malaysian/ British mix since the original decor was destroyed in fire.

Overlooking the square from the top was St Mary's Cathedral built in 1894. This old white church clashes with the modern skyscrapers which tower over it leaving the whole square feeling like a model village preserved from the past. Inside were memorials to those who had fought bravely against the Japanese takeover in WW2, those who were officials in Malaysia, and even one commemorating the queens visit in the 80's. 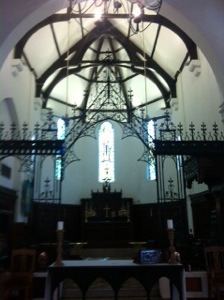 Our last stop was at the Royal Sengalor club, an exclusive club for officials housed in a mock Tudor building. This club remains exclusive to this day but as special visitors we were invited in. This building houses treasures which tell of the story of British reign, troublesome years of fire and flood and it’s place in the cities history. As privileged visitors we were allowed to stay for a drink but it’s old rule still stands of no ladies to the bar… 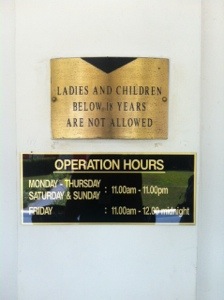 This whole square is a beautiful snapshot of Britain in a bustling Asian city with great contrast to its neighbour, Chinatown. Malaysia gained independence in 1957. After Britain failed to protect Malaysia from the Japanese in WW2 and armed many locals in the struggle against them, once the Japanese were evicted it wasn’t long before they turned on the British and sought independence. A settlement was agreed peacefully and Malaysia now has a prime minister.

Finishing the tour looking out over independence square, the former cricket pitch, we headed for Chinatown for food and a look around the Market. Chinatown is quite distinct in its tired and dirty streets which weave and bend as if they have no order. British relations with the Chinese helped clean up this once dirty and dangerous town and build the grand central market which still stands near here. We had a look around the various food and souvenir stalls here, a mass representation of their mixed influences, before beginning the hot walk home to retire from the afternoon heat.

In the evening we headed back to the street food restaurants for a taste of Malaysian noodles, Vietnamese wantons and noodle soup. The street is also home to lots of fruit sellers selling the infamous durian, a stinky fruit which we have not yet plucked up the courage to try.

In the morning heat we set off out of town to the Batu caves, a Hindu shrine housed in some incredible caves. The first thing that meets you off the train are large Hindu sculptures, a green monkey and then a huge gold statue of. The climb is some 280+ steps to the top with monkeys eyeing you up all the way up for any food or goodies they may be able to take, one attempted Ricky’s phone! At the tops, the caves are huge and open out with a great view back over the city. We saw a monkey run up to a girl and rip her bag open to steal a banana before running off to devour it. 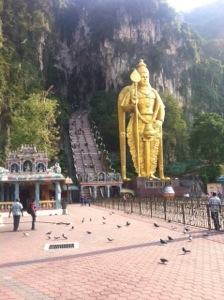 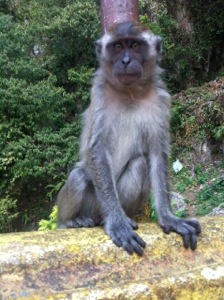 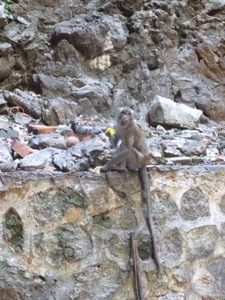 Back in the city we headed for the suburb Little India characterised by purple buildings and Bollywood music filling the streets. This is where we had lunch which came not served on a plate, but on a banana leaf! Our server gave us several dips, popadoms, a big dollop of rice and three curries to try.

We took a very hot walk to the Lake Gardens, a beautiful inner city park and began exploring at a very sluggish pace. The gardens are based around a lake and have a beautiful waterfall, an orchid garden and a kids play area all of which we visited before heading home to escape the heat.

In the evening we visited the famous Petronas Twin Towers, leaving them until night time to see them lit. Their glow and aurora dominates the skyline. The building shape is actually the eight pointed Islamic star and the two buildings joined by the sky bridge. Whilst most of the building is offices, the base is a large mall which in which we enjoyed some cake and a bit of window shopping before watching the water fountain show. 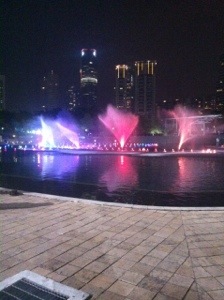 We headed into town to do a forest canopy walk but upon finding it closed we decided to return to Bukit Bintang and frequent the shopping centres again. The heat here is so intense that it is easy to feel lazy and sluggish. In the afternoon we caught another film and that is the cultural way we have spent our last day in KL. It has been an interesting city of British influence one in high competition to neighbouring Singapore which we look forward to visiting.