Welcome to the Jungle- Bukit Lawang

We flew from Singapore into Medan, Sumatra which is one of the Indonesian islands. The currency here is Rupiah and £1=19,000 so again, your a millionaire! The town we were going to be staying in was quite remote so we had organised a taxi and at the airport someone was waiting with my name! It took us most of the afternoon to reach ‘on the rocks’ which was a gorgeous little collection of wooden cottages in a small village on the outskirts of the jungle! In the evening whilst eating dinner we spotted some monkeys in the trees at the edge of the jungle feeding so we were excited to venture further in.

We were up bright and early ready for our Orang-utan trek in Gunung Leuser National park. From the bottom of the garden we entered the jungle. Our guide had grown up in Bukit Lawang and was passionate about his surroundings and the now protected 1,000,000 hectares of jungle remaining. He took us far off the tracks down steep faces and through dense areas, stopping every now and then to listen for animal calls. It wasn’t long before we came across our first Orangutan mother and baby in the trees. They were adorable and fascinating as they move much slower and more cautiously than other monkeys, but with just as much ease as they move from tree to tree. 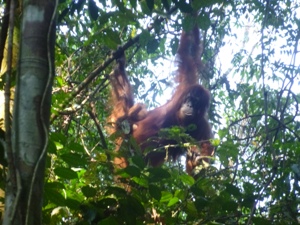 We encountered a group of another breed of monkeys, Thomas leaf, nicknamed the punky monkey due to a spiky hair do. There were 7 of them slumped sleepily in the tree tops.

A little further on we came across a feeding platform where a mother and baby were relaxing. The mother had regurgitated her food ready to eat it again which wasn’t a pleasant sight.

Our lunch stop in a jungle clearing consisted of rice in a banana leaf which we ate "jungle style" with our hands. This was followed by bananas, pineapple, oranges and passion fruit.

In the afternoon we encountered another mother and baby. The mum was eating and spitting the discarded shell very close to where we were standing. They look very cuddly and cute however we were warned of one vicious one named Nina and if she appeared we wouldn't be hanging around long.

As well as the monkeys we were on the lookout for huge butterfly's, colourful beetles and interesting flora. Ricky spotted this huge stick insect rustling, well camouflaged through the undergrowth. Myself and the guide encountered the wildlife in other ways, he got stung by a bee and I sat on an ant and got a pinch to the bottom! 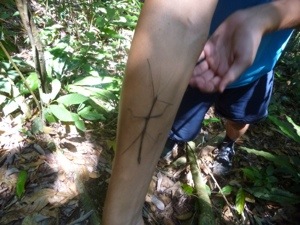 Our guide led us a very undulating and tricky route to camp. Instead of going round the hills, he took us up and over and often we were clambering, holding onto vines for support. We could hear the calls of white handed gibbons in the distance. The camp was a group of tents on the river. Our settlement had a tent for us and a covered kitchen. Our guide slept outside! We cooled off in the river, our jungle bath and relaxed on the rocks. Our evening meal was served, a range of curries, rice cakes and potato cakes and bite size fried fish. Once the sun went down a group of long tail macaw monkeys came down to the river to drink and we could see them playing not far off. 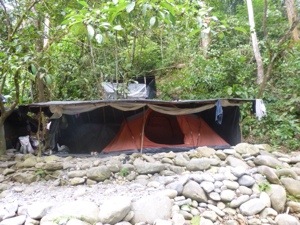 When we awoke the temperature was slightly cooler and we enjoyed breakfast riverside. The monkeys made their presence known in the trees and across the river. They were playful, bombing into the water, pulling each other’s tails and trying to push each other into the water.

Our guide took us across the river to a waterfall and swimming spot where the water was icy cold and refreshing. Here we swam and cooled off from the heat.

After lunch we tubed back to the village. They tied four tubes together and loaded up all our belongings. The water was low and the current strong so it was like the white water rafting and the chef of the camp steered us through the splash using a bamboo cane. Monkeys and houses lined the banks of the river, locals bathing but always covered completely including headdresses for the women.

Back at our cottage it was great to have a real shower and a real bed for the night! 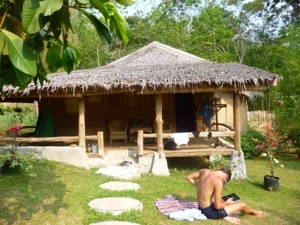