We caught the speedboat to Padandbai, Bali and then took a shuttle inland to Ubud. Our first glimpses of Ubud were artsy streets and coffee hang outs. Our accommodation was tucked down a little lane and looked out over lush greenery. Soon after checking in, the heavens opened. Heavy bursts of rainfall are common here and the rain lasted no longer than an intense 10 minutes.

We walked into the town and explored the souvenirs markets and local area strolling amongst the art gallery’s, book shops and knock of DVD sellers which make up the town. It is a beautiful town, lots of sculptures and rustic decor. Another intense down pour drew all the traders back inside. Ubud is home to some of the footage from the film ‘Eat, Pray, Love’ which although I haven’t seen the film, is where I pinched the blog title from.

We took dinner at a little pizzeria and then headed into town for a Bintang beer at a bar which had live music. It was a lovely introduction to Bali.

We pulled on our walking shoes in order to enjoy what Ubud does well, beautiful countryside. We headed out of town through smaller villages and local towns and then cut in to rice paddies and lush green scenery. The rice paddies are striking as the rice is submerged in water with man made banks around each patch so the field can be easily manoeuvred. We weaved our way through these paddies to rejoin the road at.

From here we cut through a banana plantation and amongst fields to reach the river. The scenery here is breathtaking, the steep banks cultivated to plant rice by layering the plots to form a staircase down the hillside. The plants are beautiful shades of lush green and deep purple. 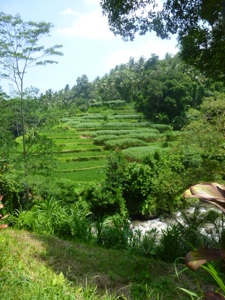 We followed the river bank and emerged in in time for a meal. I asked a lady for rice and she bought a combination of veg and meat and I’m pretty sure there was some chicken food thrown in for good measure. It was a hot walk back to Ubud.

We had a quiet evening and early night ahead of a very early start for Volcano trekking.

Our 2am wake up call came much to soon and we bundled into a car which would take us to the foot of Mount Batur, one of Bali’s active volcanos! Indonesia has 130 active volcanos taking it in turns to erupt. Last month there was 2 large eruptions; Mount Sinabung in Sumatra and Mount Kelud on East Java proving how lively this part of the world can be!

After a cup of coffee and a snack we were ready to begin the ascent. The volcano is 1,717 metres high and it took us about 2 hours. It was a well walked path, quite rocky in places. Our group decided to continue on from the rim to the summit, another 20 minutes of steep ascent but much more sandy and sloppy underfoot. The summit was chilly, a wind blew and had us shrinking into a shelter, watching as the sunrise broke across the sky in beautiful oranges and blues. 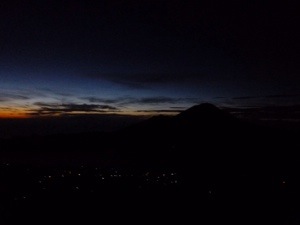 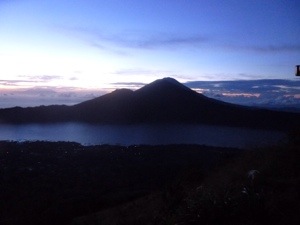 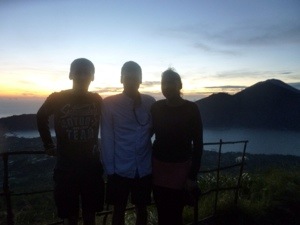 As the sun came up we ate our breakfast overlooking Bali’s highest volcano, Mount Agung which lay just across the waters of Lake Batur. The descent was very slippery from the top, more like skiing than walking. At the rim you could see steam coming out of the crater. This volcano last erupted in 2000, it’s large big eruption in 1963 which formed new land around the base of the volcano.

It was a beautiful walk to the bottom with lots of solidified lava marking the path of the 1963 eruption. Our guide kept us amused with some very tall tales about his many girlfriends, confiding in David with all his ‘tips.’

From the bottom we were taken to a plantation which grew coffee, tea, lots of herbs and spices and sweet potatoes. A man took us around explaining the process of harvesting and roasting the coffee and then gave us samples of the final product, and many other interesting mixtures, an interesting one being sweet potato coffee!

We returned to the hostel about 11:30am, exhausted. We had some lunch and went to bed for a few hours. When we resurfaced mid afternoon we headed into Ubud town to the Sacred Monkey Forest. We had to duck into a few shops on the way to escape the short downfalls.

The sacred monkey forest is home to three Hindu temples with lots of beautiful sculpting, buried in a forest which is home to thousands of very cheeky monkeys. We saw a monkey steal a drum from a man and proceed to first play it, when this failed he attempted to bite pieces off it and break it! 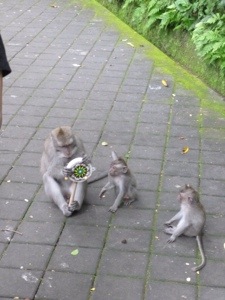 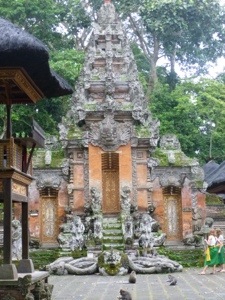 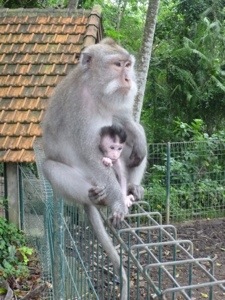 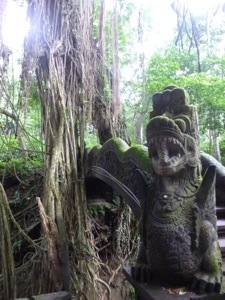 In the evening we had tickets to a Kecak dance and fire show which was held in a temple ground in the centre. It was the Asia equivalent of watching Shakespeare performed in a church grounds in England. As the show started 100 men ran out singing and chanting taking place in concentric circles around a fire piece. These men were the choir and using only their voices they gave an amazing atmosphere to the show. The story was somewhat hard to follow, a prince lusting after a beautiful goddess and the ensuing battles between the god of the monkeys and the god of the birds however the dance and costumes were stunning and entertaining to watch. As the main part of the show ended a fire was lit mid stage and a man dressed as a horse began dancing around the embers before kicking them flying everywhere. He continued this until his feet were very black and looked very pleased with himself! This is known as the trance dance which aims to prevent society against evil. 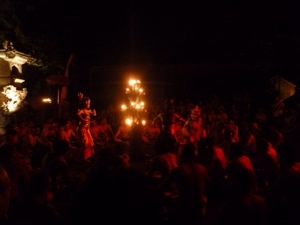 Ubud has been a gorgeous introduction to Balinese culture and beautiful countryside. Next stop, Nusa Lembongan.