“It’s not a bus, it’s a truck!” – Kruger park and the Panorama Route

After arriving at the backpackers to meet the tour, we all got chatting very quickly. I was sharing a room with 3 girls who were travelling alone, a Brit, American and Austrian, Carolyn, Meren and Barbara. There are two young families on the group, an older couple, and many others, totalling 27. We met our tour leader Matt, driver Juan and cook, Mama flo, had dinner all together around the campfire getting to know one another. The ages in the group were very varied, from 72 to 8, and we were all excited for a good trip ahead. A lot of the travellers were jet lagged and with a 5:30 start ahead of us we were early to bed.

The alarms sounded and we packed up and met our truck, a huge green container on wheels. We headed out of Benoni to Middelburg to shop for supplies. Our crew also included a driver and cook who loaded the truck full of supplies.

The long drive took us through a hilly plantation area, east of Johannesburg. We saw citrus and cactus and eucalyptus growing en masse. Our camp for the night was in Hazyview, about 12km from Kruger park. We put up the tents and got settled before half of the group left to do the evening game drive. The rest of us joined in the bar enjoying the South African ciders.

We were starting to get used to the 5:30 alarm clock as we got up ahead of our day in Kruger Park. Once we arrived in the park we were split into three safari vehicles. The park is 23 million hectares crossing South Africa and Mozambique. Unlike Midikwe the trucks couldn’t head off road, but from the tracks we saw giraffes, rhino, wilderbeast, eagles, loads of elephants and hippo. My highlight was seeing the hippo bathing by the side of the river, or submerged showing only nostrils, so graceful despite their size. In the afternoon we came across a huge heard of elephant with lots of young, all grazing and washing each other. 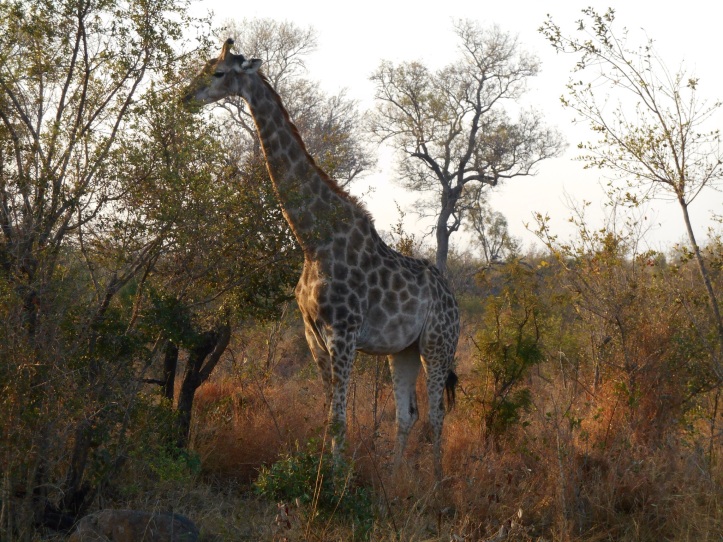 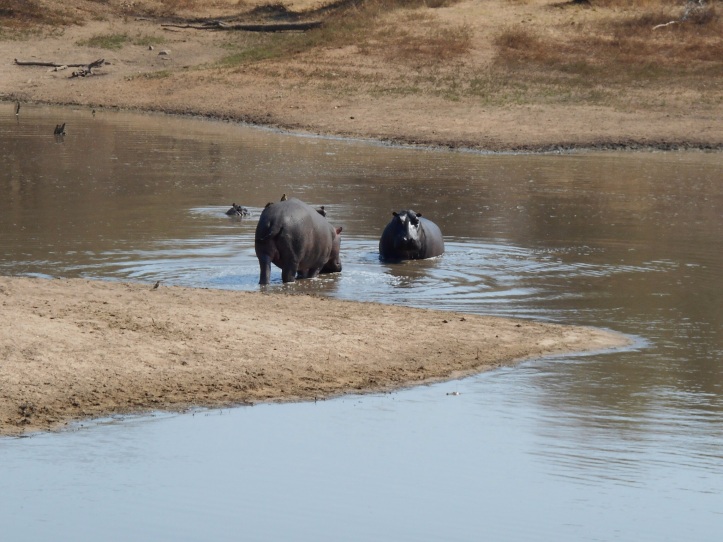 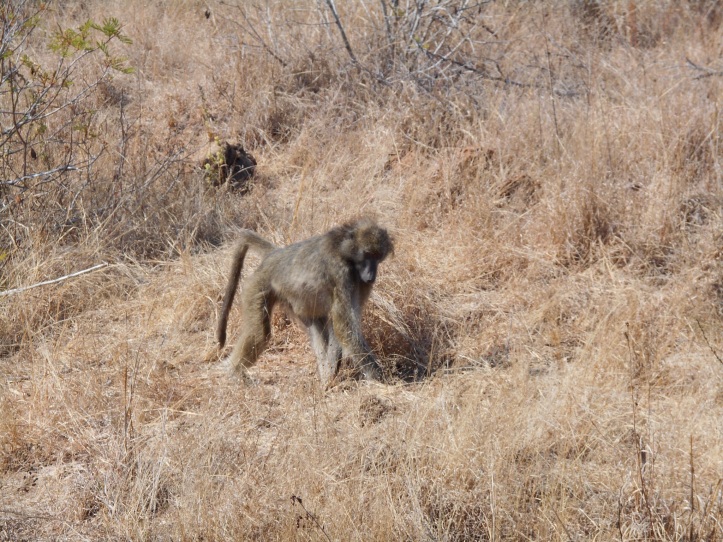 The park was originally called Sabie Sabie but is now named after Paul Kruger who started conservation in this area. The drive was all day, 7am- 4pm in the park and we returned dusty and ready to relax but chuffed with the experience.

We keep being reminded that this is an adventure not a holiday, something we kept in mind on our third 5:30 wake up call. We packed up the tents and hit the road heading to Polokwane. We were passing through an area called pilgrims rest where originally Dutch expats would have tried to live free from the laws of the colony. The landscape was dramatic with mountains and valleys. The long drive day was broken up with two view stops.

Blythes river canyon was the first stop, an area where two rivers meet in a dramatic canyon, the fifth biggest in the world, however the worlds greenest as it is lined with vegetation. It was described to us as the meeting of the happy and sad river, also nicknamed the potholes due to the carved shapes in the river bed which reminded me of much of Gaudi's architecture. 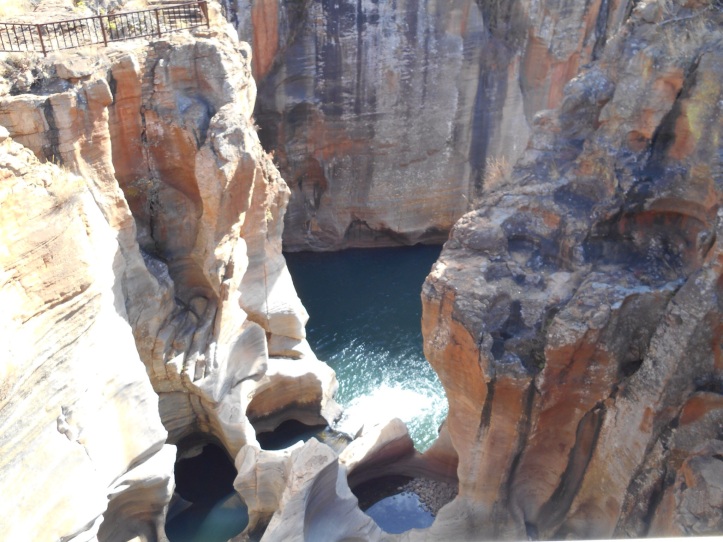 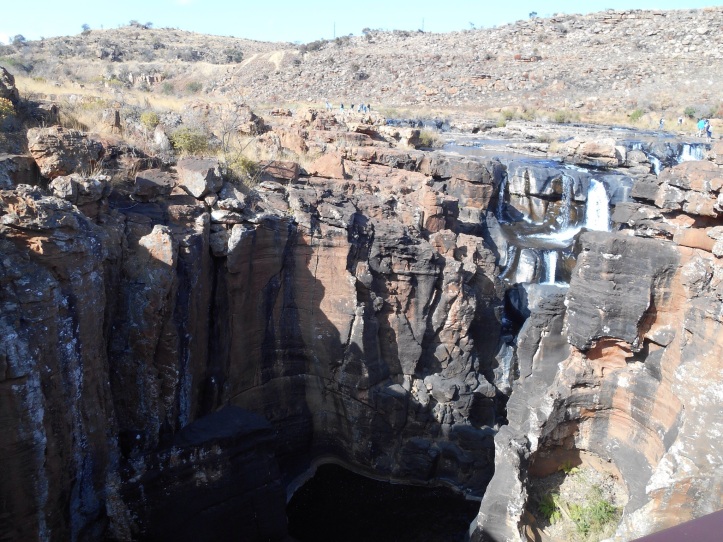 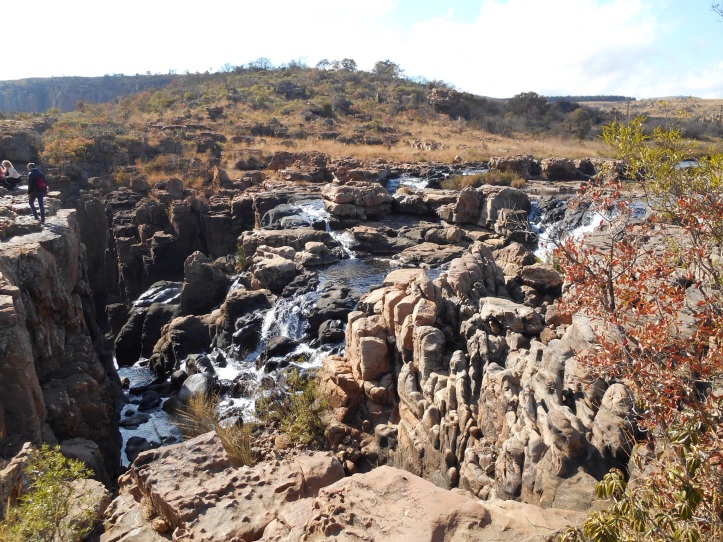 The next stop was the 3 rondavels, a beautiful mountain top view with three carved rondavel, or round house shapes. The hilly landscape dropped into plains beyond.

There was a lot of driving this day so we pulled out the bus games, cards, charades and a lot of laughs. When guessing which white bird is a symbol of peace, Martin guessed penguin and had us all in stitches. We also kept Grace, the youngest on board, entertained with magic tricks.

We finally stopped at a supermarket to replenish supples before heading on to camp. At the supermarket a bus of school children pulled up next to us as we were about to leave. They were all waving and smiling and their teacher got onto our truck to ask where we were all from. As they walked away they were posing, waving and dancing and I think it's safe to say were just as excited as they were, that they were excited to see us. The site had a campfire which we all sat around to enjoy dinner and celebrate Mark's birthday.

For our late start we awoke at 7am an were even treated to a cooked breakfast before packing the truck. The days drive was 3 hours towards the Zimbabwe border and we stopped for the night at Musina to enjoy the hot springs which occur here. Our camp was overlooked by a large hill and after lunch a big group of us took a walk. It was quite a scramble climb to the top, from which you could see the camp, the town and the hills beyond.

The camp was also the site of hot springs which fed an outdoor swimming pool. The main hot pool was the temperature of bath water however Maisie made sure we interspersed relaxing with a dip in the freezing cold pool next door. We also tried the indoor pools where temperatures reached 40 degrees but could only manage it for a few minutes.

Over dinner that night we were warned about the next day where we would enter Zimbabwe. No political or economic talk would be allowed in any public place, including the campsite, for fear of spies. We were warned no photos of government buildings or workers and definitely no mention of Robert Mugabe.