We arrived to Swakupmond, Namibia’s second city, on the coast but in the middle of the desert. We were taken to book activities. We had been thinking for a while about booking a skydive and making the decision to do it was the moment of truth. 7 of us signed up and were to be picked up in 2 hours, no time to back out.

Our accommodation for the nights was real beds in a dorm. We had an attic room. We cleaned up after our night in the bush camp and psyched ourselves up. Once at the office we signed our lives away and were then driven to the coast, looking out on miles of noting either side of the car.

We all got kitted up, the plane took three people so would take three trips. Hannah and another girl were first, a 25 minute flight then we saw tiny white spec jump from the plane. The moment I saw them I lost all my nerves and got so excited, I knew I would love it. When they landed they were so happy, shaking with adrenaline. The second plane was Sven, Gio and Barbara, then finally Linda, Gita and I. The plane was tiny, no room to move, and a plastic pull down shutter for a door. We began climbing, the view was of nothing, sand and sea for miles. The town shrunk away below us. We looked at the clock and we were only at 4,000 feet, a bubble of nerves realising we were less than half way. The guys who were jumping with us were playful, tickling and scaring us to make us relax, as they were filming they got the pilot to nosedive the plane slightly without us realising and we all screamed! 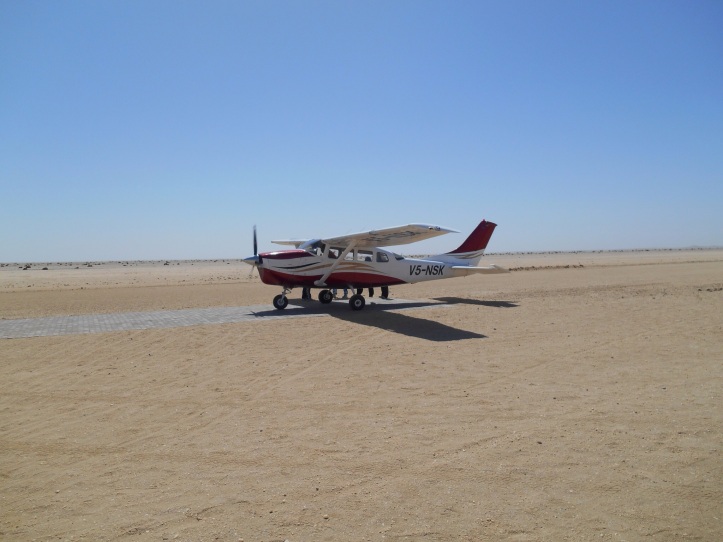 The time to jump came really quickly, Gita paled as she went to jump, then Linda. We shuffled towards the open door, and you hang out as the professional sits on the plane doing last adjustments, then you fall! That rush of wind is incredible, 30seconds free fall from 10,000 feet. I don’t even know what goes through your head but it was the best feeling ever. The parachute releases and oh swing out vertical, slow right down. It is about 5 minutes to the ground and my guy let me control the parachute, tugging side to side to make the parachute spiral side to side. You lift your feet up, graceful landing and that’s it. We were all high on adrenaline and couldn’t stop smiling.

Back on land we took to explore the town, the wide streets and old German buildings but beyond the main streets is just desert. We walked along the beach and to the local markets. Swakopmund is said to have 4 seasons in a day and certainly felt different to the scorching heat of elsewhere in Namibia.

The group met for dinner at 7, the drinking was already in full swing, and from the restaurant we headed into the bar next door for lots of dancing, tequila and the making of some new group gossip!

We all missed the 9am breakfast and Christa came to wake us at 10:15. Feeling worse for wear I begged her to cancel my quad biking, due to be picked up in 15 minutes but she just laughed! I dragged myself to the centre, drunk a lot of water and we were on our way. The sand dunes start from the adrenaline centre and it was me, an English girl Rachel and our guide Pemba.

The morning Quad biking was incredible, sad dunes for miles and miles, some steep descent and adrenaline tracks and he stopped and pull out a magnet to demonstrate the iron in the sand. When he pulled the sand up it was covered in filings. We drove right up to where the sand dunes met the sea, then back into the office.

Pemba dropped me and Rachel in town as we decided to have lunch together. We went to a German beer hall and she recommended I have the game steak as the quality was incredible. I agreed and went to the toilet, when I came back she said “I ordered for you, she wanted to know if you would like Springbok or oryx so I ordered you Oryx.” It amused me however the steak was the best I have ever had, cooked to perfection, not an inch of fat.

After a while of chatting we parted ways and I headed back to the hotel, however my sense of direction failed me and I wandered the streets for almost an hour before finding anyone to ask the way.

I slept away the afternoon and we all got ready for our evening meal, another German delicacy.

We packed our bags knowing it was back to the reality of tent life, and set off for Soussevlei, home of the desert and dune 45.

The first 150km were flat and straight desert, we pulled over on top of a hill for a bush toilet and from there the landscape changed into a dramatic rocky outlook of a canyon. The water was completely dried up but would lead into the fish river we would encounter later on.

We also made a stop as we crossed the Tropic of Capricorn, then our lunch stop was a little town called solitaire, population 92, famous for delicious apple pie. True to form the apple pie was delicious, the strange town looking like something from a western just stranded there in the middle of the desert. 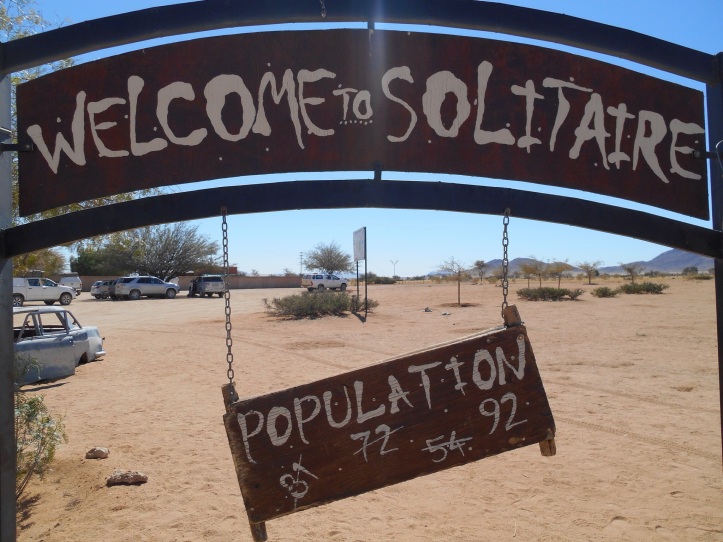 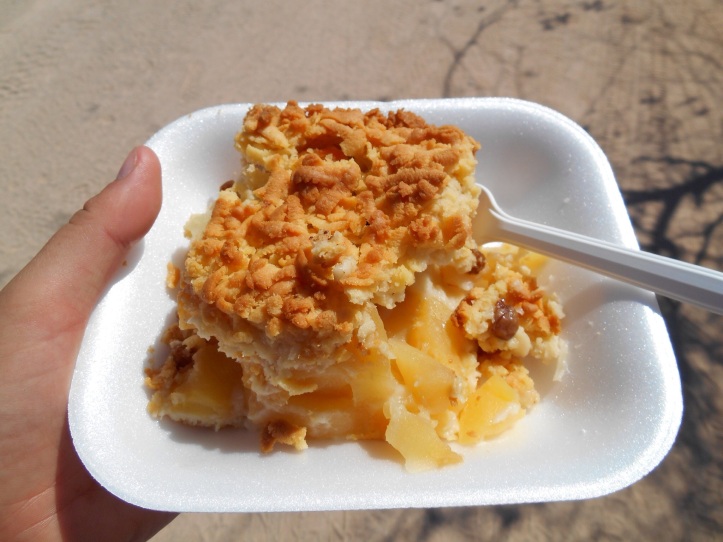 The mid afternoon temperature was 36 so we headed straight for the icy cold pool. Even in the heat we couldn’t stand it for more than a few seconds.

As the sun set over camp, Hannah, Linda and I got talking to Steve, our driver, a Kenyan. I asked him his favourite country on tour and he told us he likes east Africa and finds it very hard to travel down here. Heartbreakingly he reported he finds the people racist and him or other black staff when taking money into a bank have been asked “why do you have so much money, Africans should not have this money” or worse, the police have arrived to verify the situation. Despite the apparent progress of law and society it appears often there has been no progress at all.

We entered the park to visit Soussusvlei as the sun was rising over the horizon. The park was miles and miles of sand dunes, now bright red, the colour blown from the beds of the orange river. The morning shadows highlighted one side of the dunes, the knife edge of the top making for dramatic scenery.

We stopped to climb dune 45 which stands at 180metres tall. This is one of the few you can climb, so decided because the vegetation in this dry environment takes hundreds of years for relatively little growth. The climb was hard and steep, often resulting in one step forward, two steps back. Lay the top we sat straddling the peak, the sides disappearing of steeply. Gita and I decided to roll down the hill and having it taken us a hot half an hour to climb, in two minutes we were half way down, sand in our ears, nostrils and mouth. Sven and Gio ran down to join us and we raced to the bottom. 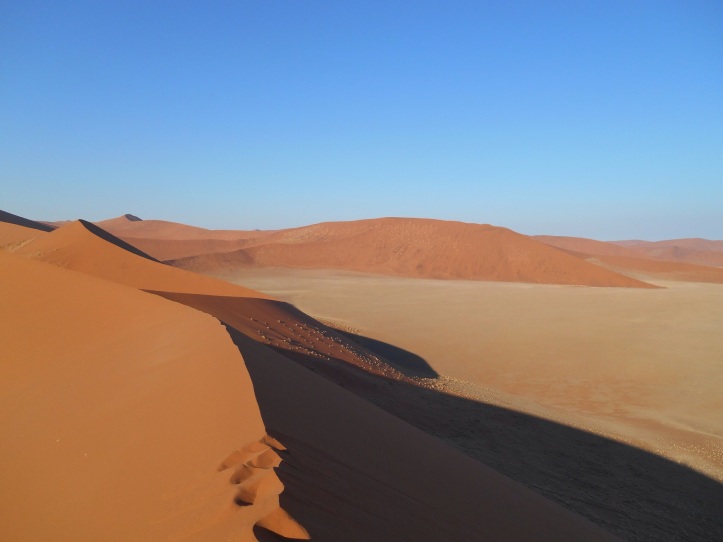 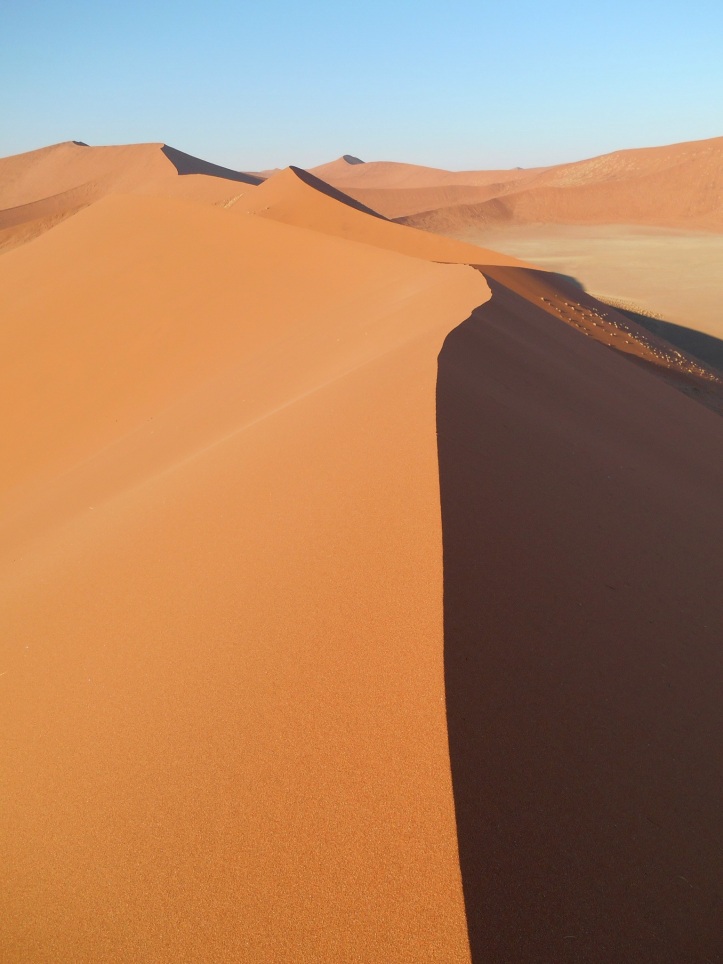 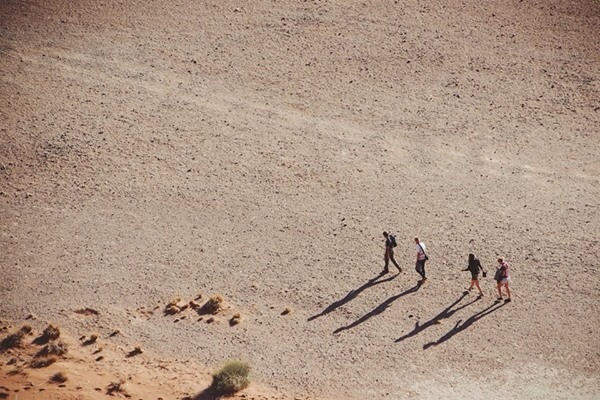 Breakfast was waiting and the heat of the day kicking in. We drove on to find Deadvlei. From where the truck dropped us, another 5km on a safari vehicle then a 1km walk thorough the dunes. There, surrounded by red sand was a dried up river grey bed and tree stumps dating thousands of years. This part of the river had been gradually cut off by the build up of the dunes and stranded these trees I become petrified. 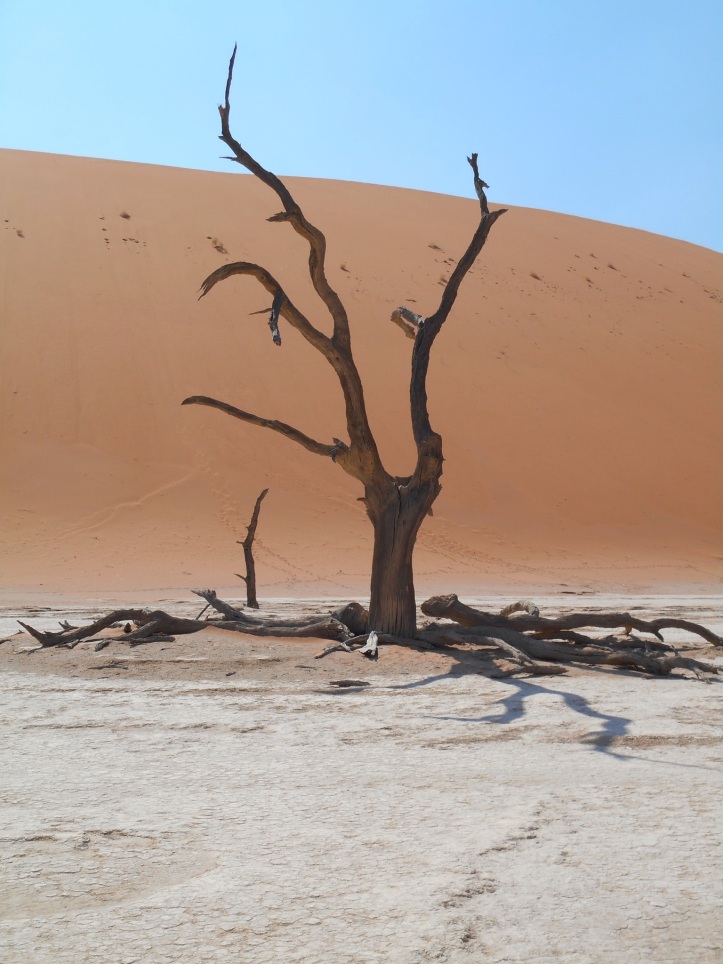 By the time we returned to camp at midday it was back to the pool. Late afternoon we set out for Sesriem
Canyon. Only 5km from camp, the canyon fills up in the rainy season, something which was hard to imagine as we walked through the parched river bed. So named in Afrikaans meaning six leather straps which would be used to hoist water from the canyon to feed the surrounding areas.

Next, our last stop in Namibia, the fish river canyon.