Weekends in Thorsmark are a chance to further explore our new home and after a relaxed Saturday we donned our walking boots once more to tackle Rettafell, the mountain outside our front window. We crossed the river to B’asar where warm weather and warm greetings started our hike, first to the mythical looking elf church, then up the side of the steep mountain. All along were perfect backdrops for photos with blue sky and a long drop behind. As we munched our pack lunches we picked out shapes in the mountainsides and clouds, some sketching, some sleeping, and the usual happy noises of singing and contagious laughter. 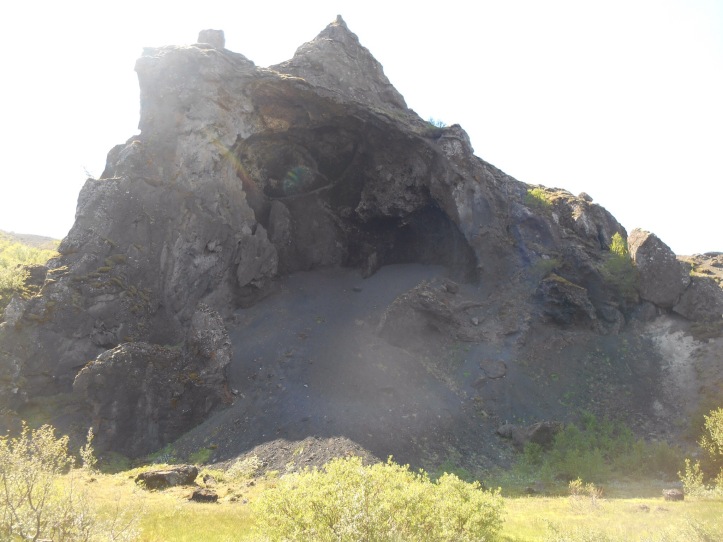 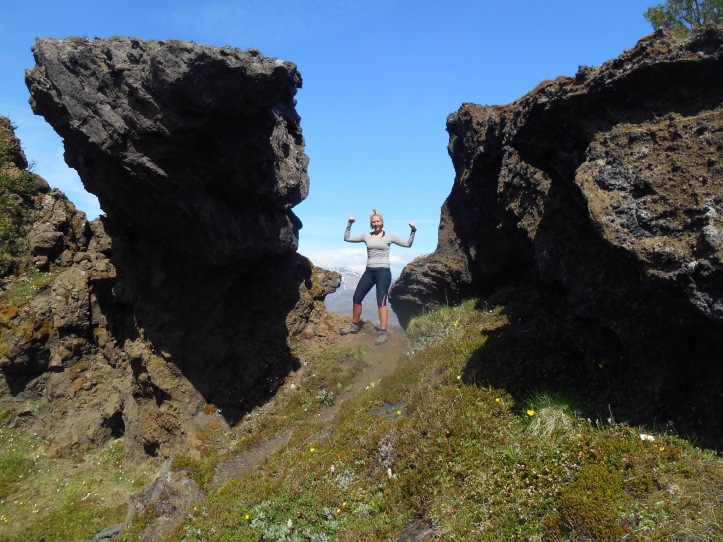 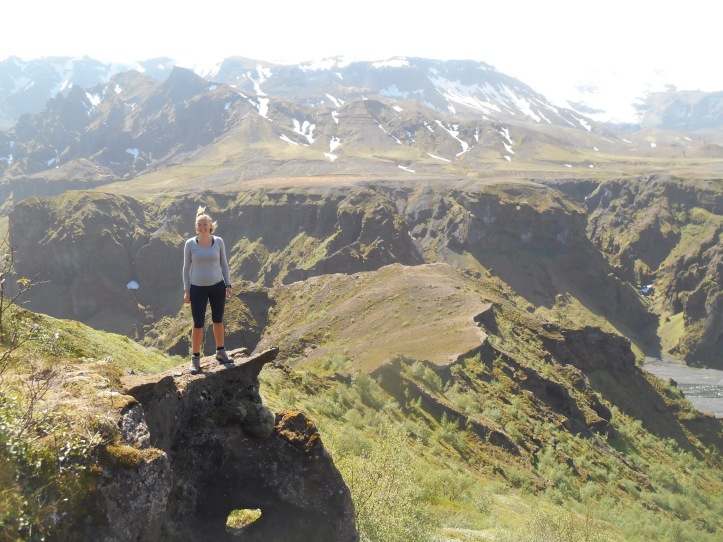 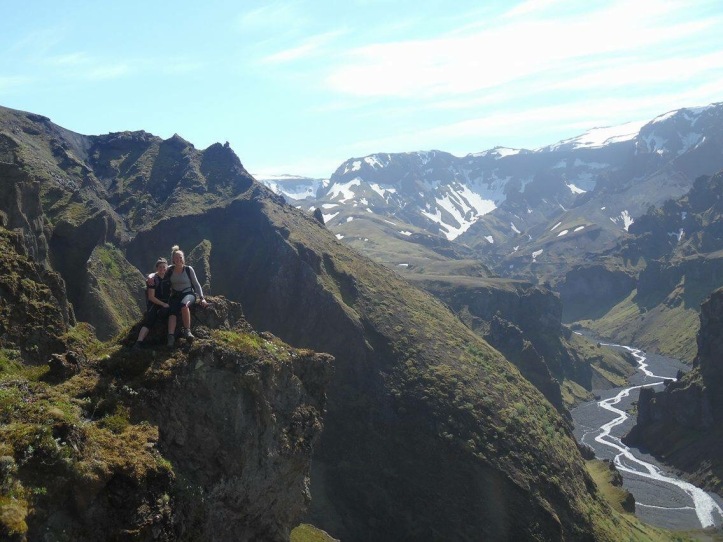 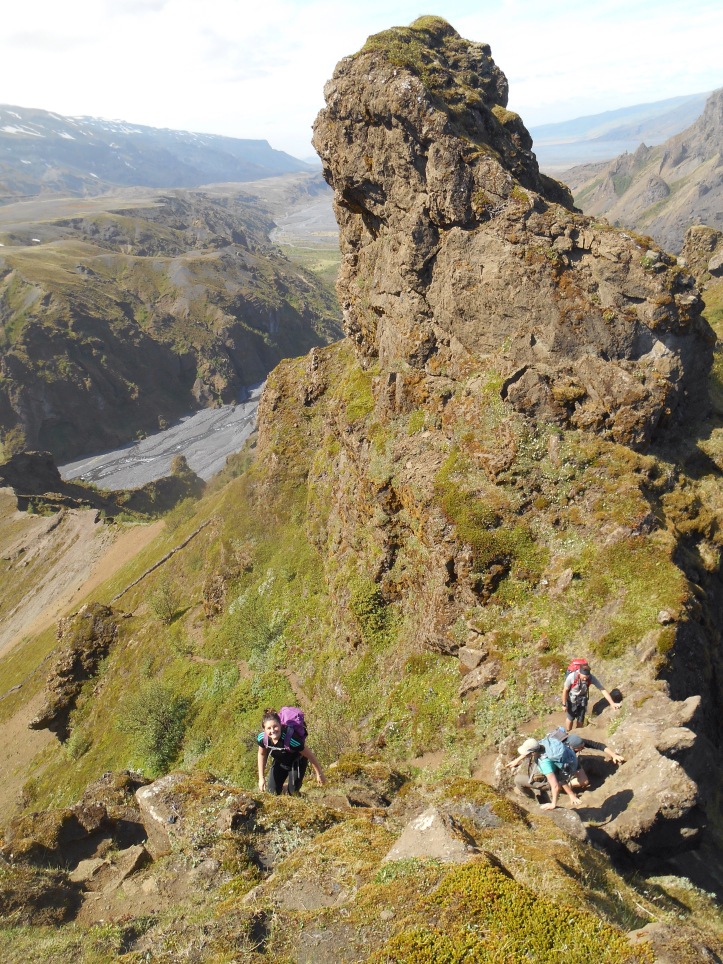 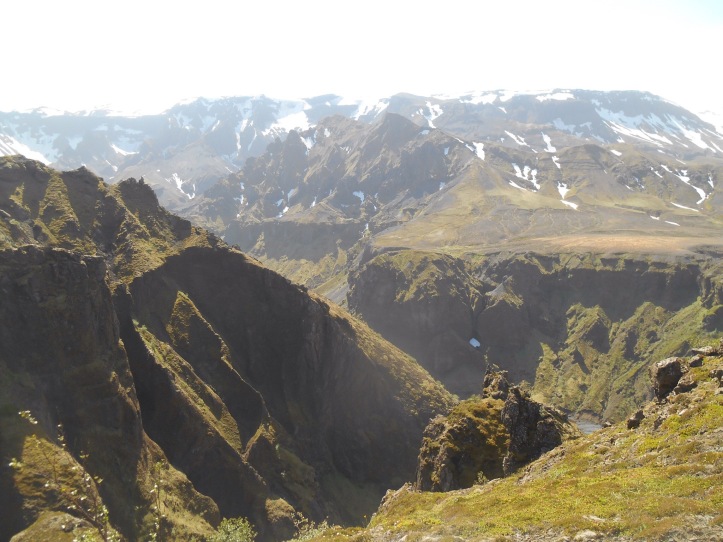 EditWe never imagined the amount of suntanning opportunities we would get in Iceland and spent the afternoon in a little sun trap watching a helicopter do supply runs up the mountain. Another surprise is our huge appetites as we easily manage 3 large meals and 2 snack meals in a day, shamelessly rummaging the snack box for tasty Icelandic treats.
Week three stretched out ahead of us, the ever multiplying group dividing into four for the week. Our small team would be working on the base of the Landmannalaugar trail, named in the top 20 trails by national geographic. In a bid to improve the trail surface the aims are to improve water drainage to stop water channeling down the path, widening the path, improving the surface and getting a comfortable gradient which doesn’t mean the loose, dry soil of Iceland ends up with a making a bid for the bottom of the hill. This translated, log drains, stone drains, steps and way markers. As Anna began collecting formidable tessellating stones for our drain, I began digging them a trench across the path. It is really clear to see a layer in the soil, maybe an inch or two down, of the ash from the eruption of the volcano Eyjafjallajokull (Ey-ya-fyat-la-yo-kul) in 2010.

Monday’s muscle shake up ended in a bout of Lupin removal and then returning home end of the day for a meal across the two camps before the long range teams departed. I was on cooking duty with Cat, a daunting 30 people to cater for as we chopped vegetables for stir fry on the giant outdoor wok. Following closely to Maria’s Gordon Ramsey like instructions the meal was a success.

On Tuesday I added a new title to my CV, Sherpa, as Anna and I offered to be food porters for the long range team who would be spending the remainder of the working week 15km down the trail. We stuffed our packs with high fuel goodies for them and led the way up through the lupin fields and across the fast flowing Throngar river. At 3.5km from base, Chas often describes this river as the divide between home and wilderness, and certainly once you have plunged your hot feet through the icy river, the landscape transforms into a vast moonlike scene. We passed our long range camp and collected the tools from our stash, checking on the progress of our work a week on as we pushed further up the Landmannalaugar trail. The rapidly melting snow means the surrounds are ever changing and only a few kms on the scenery blows out to a panoramic view, the scale of which is quite hard to comprehend. There in the valley below would be their camp.

After dropping them at camp, and several sandwiches later we set off from their new set up at about 4:30 and were home, the other side of the Throngar by 7:30pm where a fire and a hearty meal was waiting for us. Now only 7 in camp the desert was split less ways and there was a very relaxed feel.

Wednesday’s hard graft included log drains built into bed rock. The girl power team of Kaitlin, Anna and I worked with the chisel and rock bar to smash a trench. We found that the best way to encourage force was to generate a bit of adrenaline and anger so we shouted encouraging abuse at each other. As the others came to help us and took their turns, they too were abused it’s a deluge of insults.  The hard work earned us the nickname of Scotts Langidalur Beserkers. 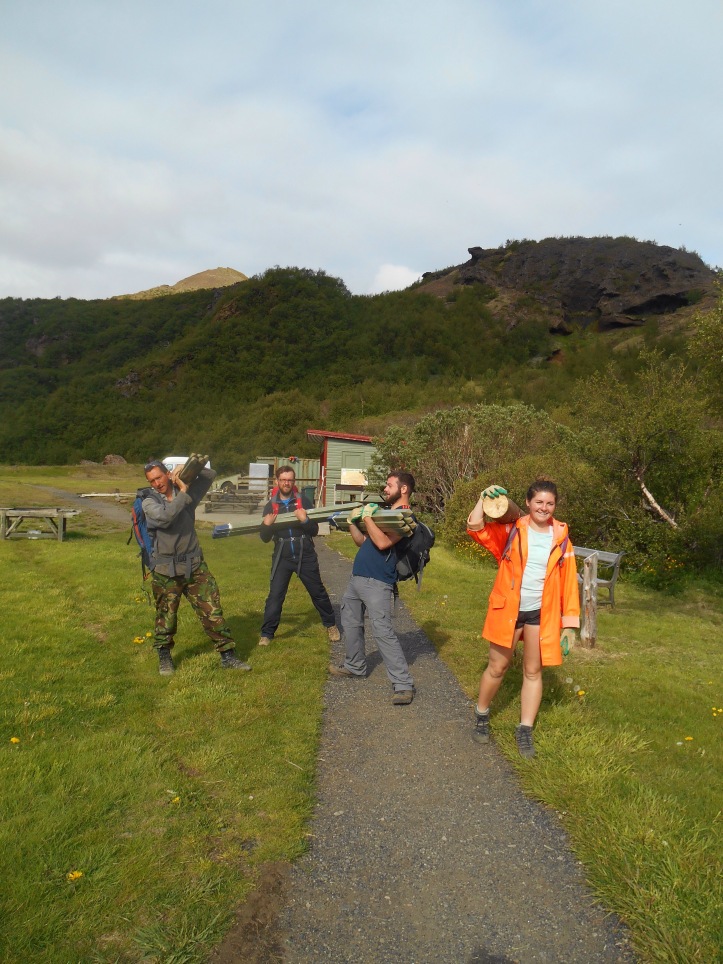 The week past quickly, every day meaning different biscuits but the same calf burn. Our Friday wind down task was staining the wooden steps by Snorri’s cave. Our fashionable attire included a paper paint suit, plastic bags for over shoes and some surgery gloves. As always, the passers by paid a lot of attention to our work beautifying the park no we heard several different accounts of the caves history. The commonly agreed story is that Snorri’s was an outlaw, chased by farmers maybe for killing some of their sheep. He climbed into the cave to hide and was cornered from the outside by farmers and dogs for days. Submitting to his fate he threw down his food and prepared to starve which convinced the farmers he must have plentiful supplies, and they left leaving him free to climb down.

Friday night was the epitome of the working week. We gathered round with cheese and shots of Brennivin, an Icelandic vodka, to share the successes of the week and all to soon, say goodbye to the two week volunteers who were leaving over the weekend. For Icelanders, it was Independence Day, a holiday to celebrate independence from Denmark and creation of the republic of Iceland. The revision of Danish control was due in 1943, however it was whilst Denmark was under nazi occupation of Denmark iceland chose to shake the reigns from the Danish peacefully, however the date is manufactured, not the date of Nazi occupation but the date of Jon Siguosson, leader of the Icelandic independence movement. For the rest of us it marked the start of holiday week so we welcomed it in Thorsmark style.