It is still a buzz to get that realisation, I live here. Mitre peak is my backdrop. I work in a fiord. Through each weather it is a privaledge to see how this place transforms, from mysterious looming low cloud to blue sky, to deluges of waterfalls to double rainbows. On one memorable trip when at Stirling falls, the elbow of the fiord, I could see rain and cloud at the terminal, 8km one way, blue sky at the open ocean, 8km the other way. The scale of this place blows my mind.

I ventured on a few other vessels. Some of the bigger boats (with the smallest steering sticks) for the lure of the breakfast buffet, some of the smaller boats for the speed to which we could travel out to the open ocean being tossed around on the rolling swells of the Tasman sea, humpback whales playing on the horizon. An incredible experience was a spy mission on one of the boats replicating the old sailing scrows. It’s beautiful masts hold old sails, it’s giant steering wheel and wooden decks. I was taken below deck to see the crew quarters, the tartan furnishing catching my eye. From each boat, a new commentary highlighted something different, your eye was drawn to a new feature, a steeper cliff face.

At night nature continued to exert her force. We w﻿alked up the Milford road, the pitch black revealing the mass of glow worms in the roots and crevices of the forest. Stars and glow worms lit our path, illuminating the outline of mitre peak on our return.

Halloween became one of the first nights organised by the masterminds of the Milford social committee and including everyone. I signed Cruise Milford up to host it in our garage and with a team of volunteers we makeshift transformed the garage into a beautifully decorated space. The effort in the costumes was outstanding, from witches, grim reapers and jokers, to a coordinated effort by the lodge to march in as LEGO men. 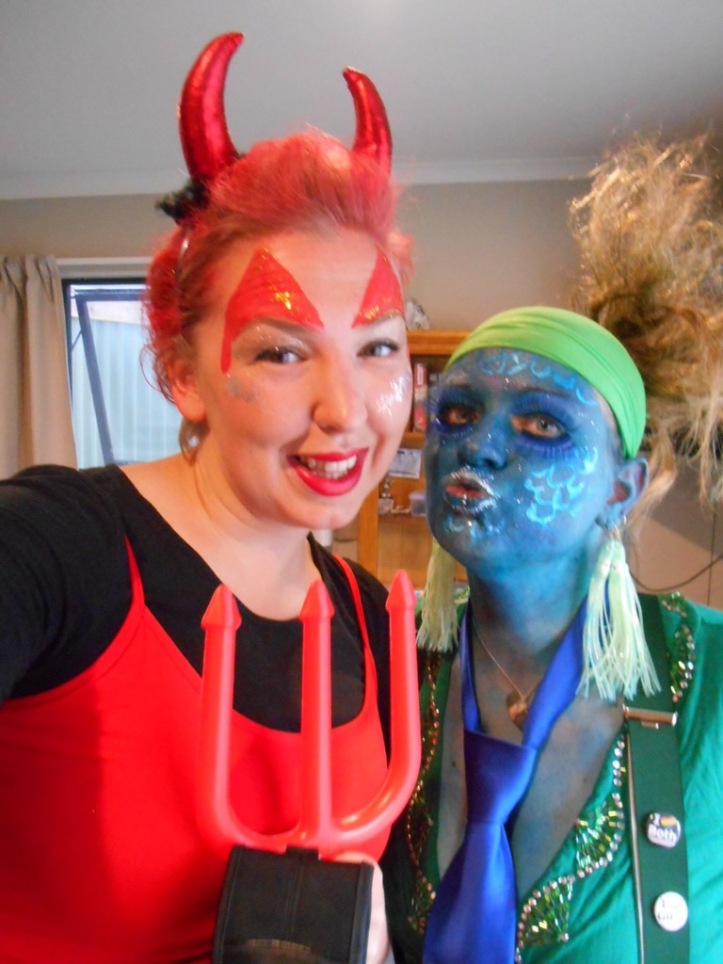 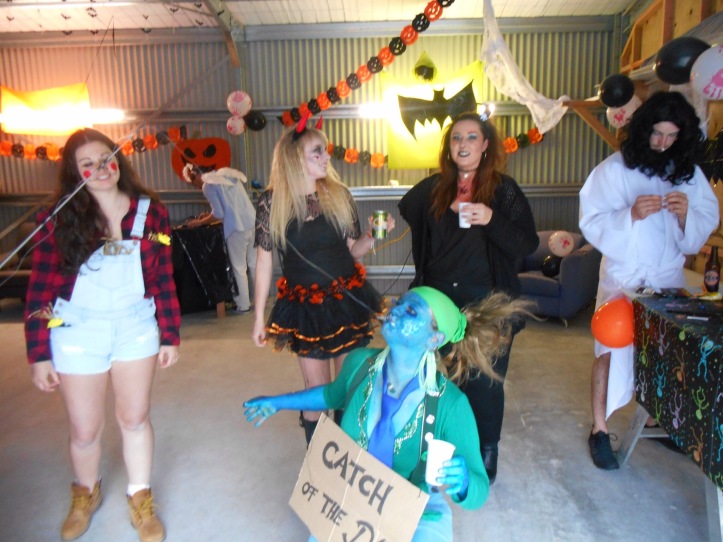 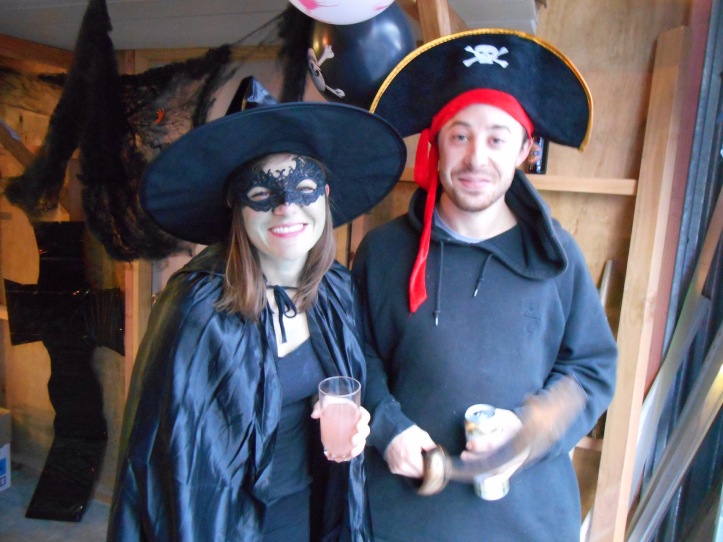 Making socialising a priority, the start of the season has also seen two open mic nights, showcasing the meshing of talented bodies this part of the world has attracted. Our new deck in place, rare sunny evenings have called for impromptu BBQ’s and experimental bake offs. Handily, I became good friends with Ina, a chef. Our evenings together usually consisted of concocting a culinary treat. One particular self set challenge was ice cream, inspired by a flavour we sampled. Berry, macadamia nut and white chocolate. The results were too good to shout about. 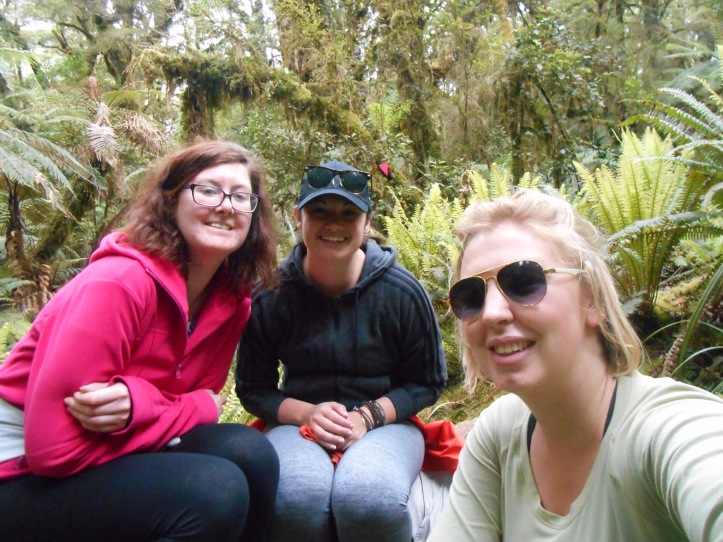 In a year of collecting firsts, the American influence in Milford meant we were celebrating Thanksgiving. A mighty feat considering the number of people, volume of food and proximity to the shops, but whilst Allison took control, many helpers made light(er) work and we got to learn a bit more about the cuisine (just add sugar) and culture of Thanksgiving. With lashings of turkey, veggies and pumpkins in every form, the 24th November was a great night of socialising across all the companies in Milford.

On one of my favourite days in the fiord, I swapped my lie in for a rude awakening, made my way to Deep water basin to gear up and head out on Pacific Runner for a day with the scuba divers. A small boat with great engine, we raced out to the end of the fiord, a completely different experience to the scenic plod of the Adventurer. At penguin cove we got ready for our first dive. At 13 degrees it was by far the coldest wet suit dive I had done and was relieved and concerned at the abundance of layers being handed out. Again, that fresh water layer affects Milford so heavily. Even without much rain, dropping down into the water was very blurred, poor visibility for the first few metres with the thermocline affect. Below, visibility was good but the light was filtered out, so we were diving with torches. The walls of the steep cliff faces continued down vertically, many corals, including the unique black (white in colour) coral, formed forests at 10metres. Milford is divided into two, the south side being fished and the north a marine reserve. The protected crayfish sit smugly and abundantly under the cracks, somewhat confrontational with their many spiny fronds. It reminded me of the giant collection of spiders in Harry Potter. 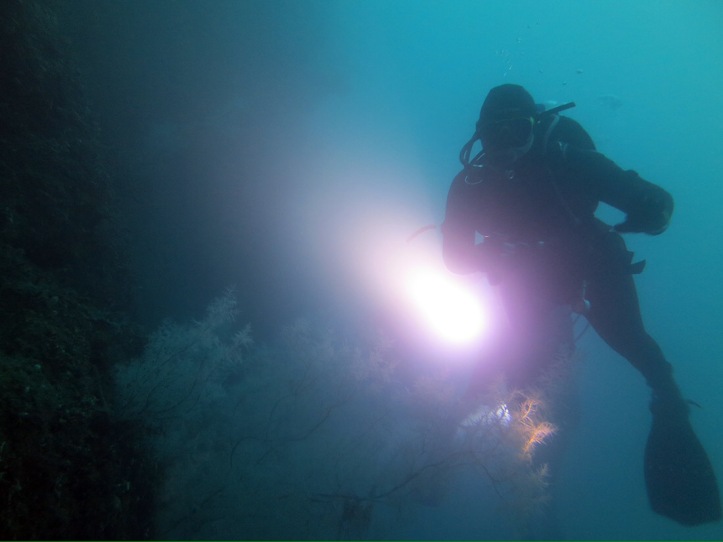 In between dives, after warming up with hot drink and cookies, we had one of my Milford highlights. They got us to (reluctantly) swim a short distance to the land, a beach under Bridal Veil falls. A short rocky traverse and we could bathe under my favourite, and normally inaccessible, waterfall. The icy cold water runs from way up the mountain, down the tectonic splinter only visible at certain angles. The actual waterfalls is a 55 metre drop which looks small considering its surroundings.

On our second dive we had a playful seal who came close enough to eyeball us before flipping and circling us. We also saw a dog shark and much more of Milford’s beautiful marine life.

After the whole day in the fiord, a cold, wet evening was spent doing the locals kayak training, an opportunity for those living in Milford to learn how to self rescue so that the kayaks could be taken out on local missions. It was great to paddle around, up to the end of the Milford track and through the beautiful vegetation, only slightly hampered by the thought of the impending dip into the fiord, twice.

There was a fair amount of gasping, swearing and grappling, but everyone managed to get back into their boats and pass the course. Ina’s ‘warm you up’ tea and rum was a welcome treat on shore.

A fantastic perspective however was the fiord from above as I was lucky enough to jump on a flight to Queenstown to begin my days off. A 35 minute trip across the southern Alps puts into perspective the incredible 4 hour detour the stunning Milford road takes. We took of into the fiord, southeast on a four person plane. With a day breeze blowing we were tossed around a bit as we climbed the steep cliff faces and circled back to view Mitre Peak and the route out to sea. As we turned on ourselves we could see Milford in its entirety, and I could pinpoint my house. We flew up the river valley, over the snowcapped granite mountains of the Milford track then out of Fiordland. Still mountainous, the Remarkables are noticeably different. As they are not granite they have been eroded further so not as steep as Milford. They are one of only three mountain ranges in the world to run true north to south. On the other side we flew down Lake Wakatipu, half of its 75 miles of length to Queenstown, where we landed and made our way. 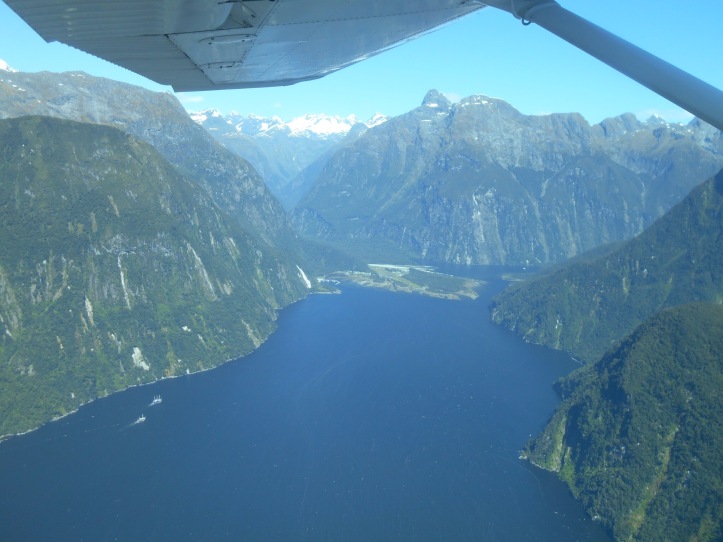 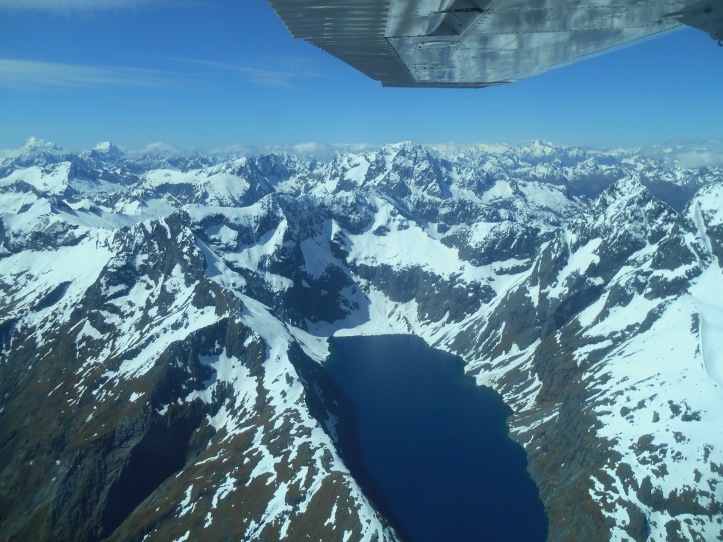 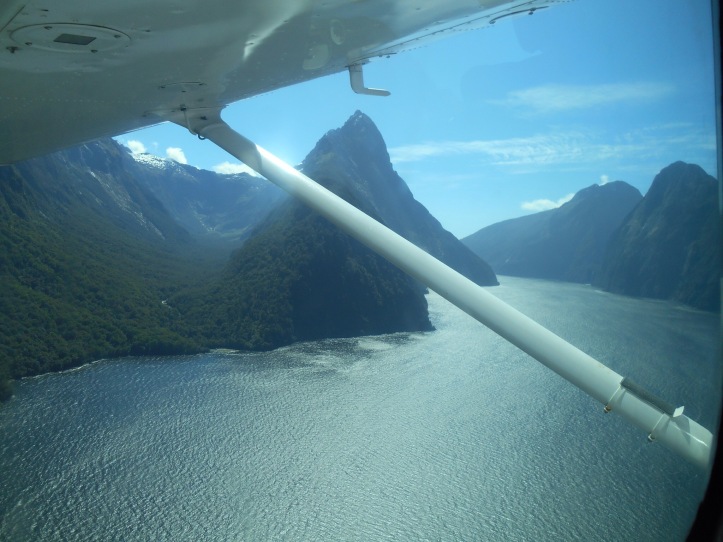 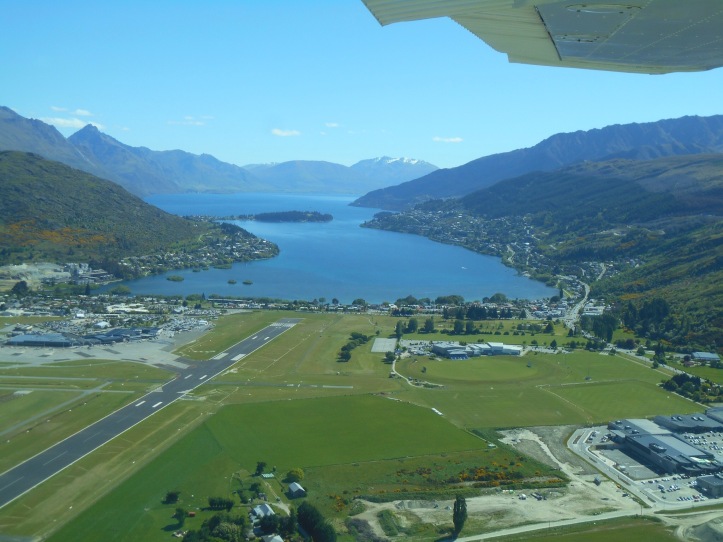