Despite having moved camps to Langidalur, I was to be taking a smaller team to the mountains at the base of Rjupnafell. A picturesque valley just 5km away was fast becoming nicknamed Fox Valley because of the visiting Arctic Foxes. Jade, Sophie and James were joined by three German scouts, Vera, Franz and Johannes and we would all be heading remote for a week of wilderness. 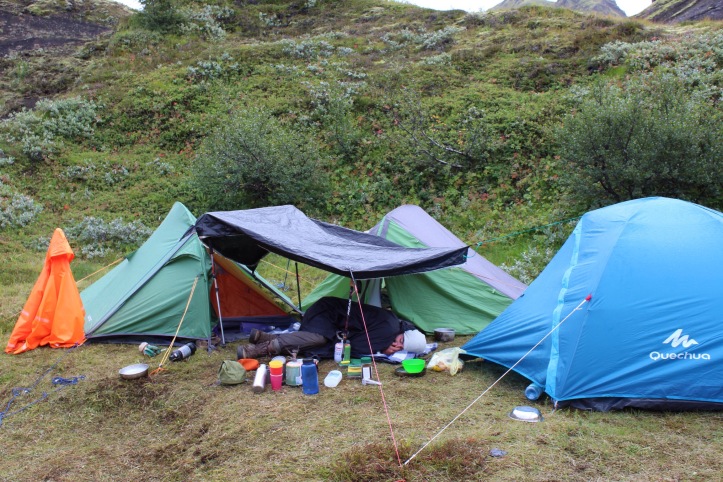 With true German efficiency we were on our way by 10am Monday morning, one of my favourite commutes, along the edge of the mountains to the Troll church, then on to drop into the sheltered valley, with a meandering river. By lunchtime, the tents were up and they were asking me, ‘c’mon then, what have you got for us to be getting on with?’
The steep climb out of the valley again demanded steps, and with lots of rock to come by, we would be building them from stone. The effect was natural and satisfying, if not challenging because there is no one size fits all guide to working with the angles nature has provided you. Big rocks we dug far into the ground to give the strength to propel people up the mountain, and by the end of day 2, 41 new, wide stone steps were in the ground, and 11 previous steps repaired. The pace was phenomenal. 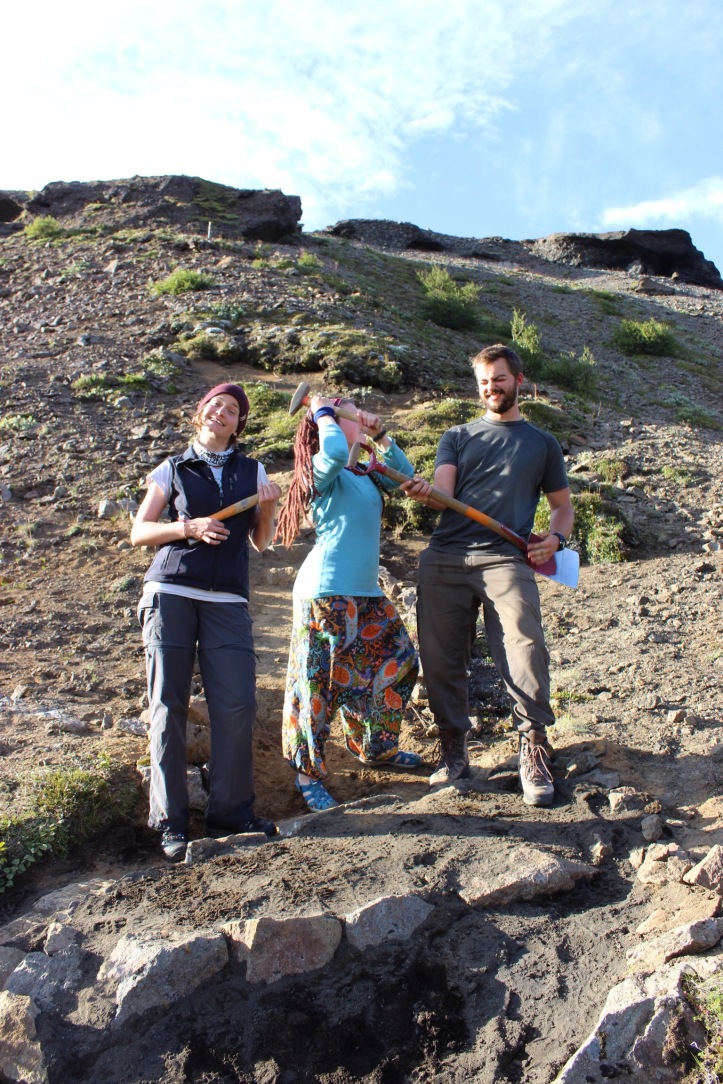 With being at a no facilities camp, we were going native, digging our own toilet and bringing all the evidence home with us. Vera designed a system whereby 2 rocks determined whether the ‘facilities’ were vacant or engaged, and the conversation for the most part centred around toilet activity. The quote of the week had to be James returning from the bathroom with the bag containing the roll of paper and saying, ‘it appears someone has put their personal poop paper in the communal poop bag…’ A very diplomatic way of reminding the criminal that although we were sharing everything in equal divisions, poop paper was an individual commitment.
We also introduced a game of Live Cleudo and mock murders sprang up all around camp. The stream was the location of two deaths. I was killed with a packet of instant noodles at the second way marker on the hill, a very specific place to be lured to my death. Another new addition to the day was the one song dance party. One big tune to bring out the most dodgy of dancemoves and get the blood flowing before the day of work. Dancing in the Orange work dungarees made for a great effect. 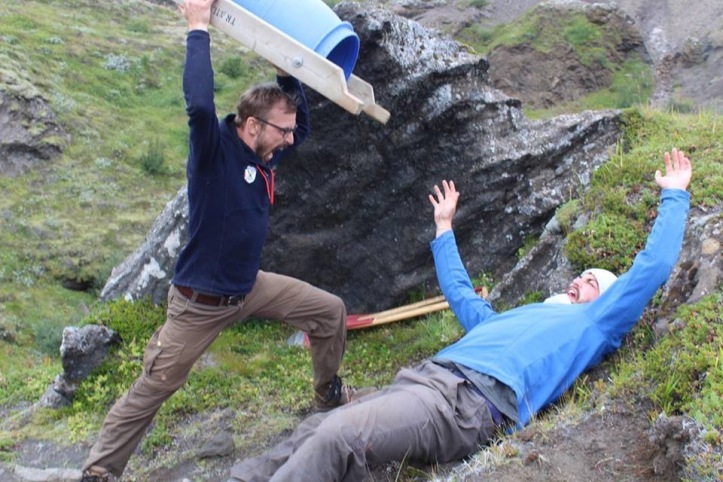 The arctic foxes paid us several visits. Tuesday morning two bushy tailed, brown fellas were sauntering through camp whilst we made porridge. They then showed off their stealth and camouflage as the scaled the rocky mountainside. The next morning, although we didn’t see them, they left us a poop parcel very close to the tents. The blue colour suggested we weren’t the only ones tucking in to the wild blueberries.

Wednesday and Thursday we had visiting teams come and work with us. We constructed timber steps in the morning, then made bets on who and when they would drop over the ridge armed with tools and food for us. As a large group we worked on the steep sides of Rjupnafell, transplanting moss to the landslip areas, and building earth drains on the lower sections. The parcels of vegetables, followed by chocolate bananas to be cooked over the fire went down a treat after some interesting dinners earlier in the week, the trade off for living in the hills.
Thursday our visiting team came bearing more gifts, and also spades for a big path widening project. My small team continued with the ‘mountain gardening’ of replanting sections of the slipping vegetation higher up. 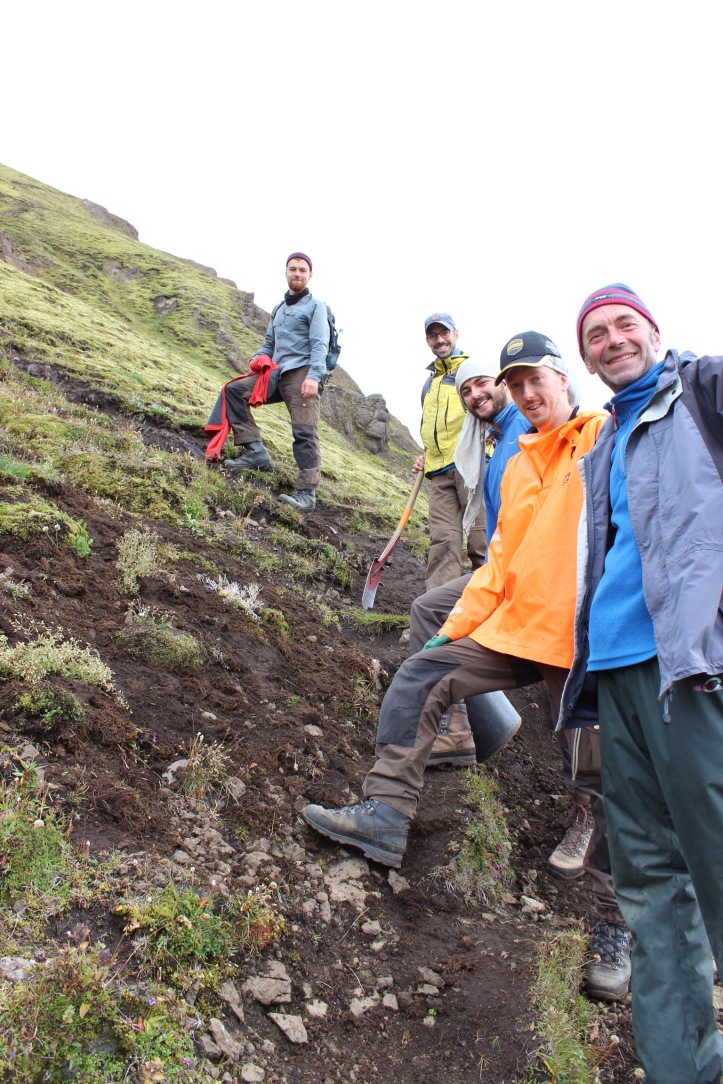 Feeling remorse at our lack of exploring at the end of the work day, Thursday evening we went for several strolls in different directions. Every meander of the stream revealed a new panorama and a new sense of isolation in this beautiful place. There were several places we suspected a fox may make its den, but we didn’t catch a glimpse of any again. 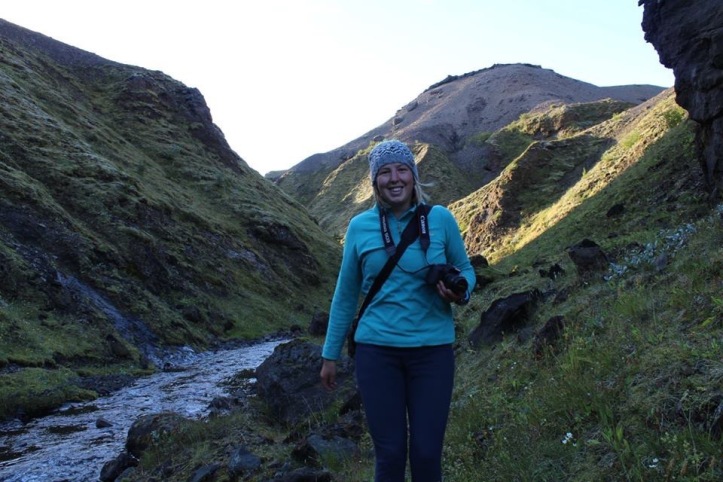 Dinner was cauliflower packet soup, with noodles, which was met with a bit of distaste, but the pinking sky made for a breathtaking end to our fourth day. At the top of the hill we watched moody clouds transform into every spectrum of colour, and none of us could find the words, so we sat in silence feeling immensely privileged. 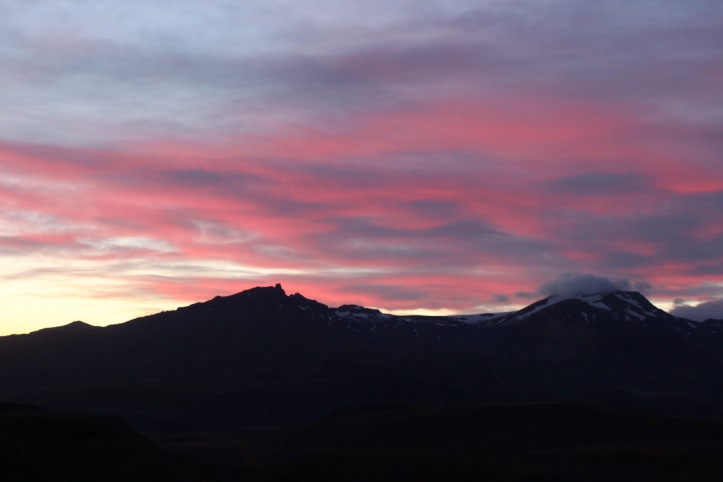 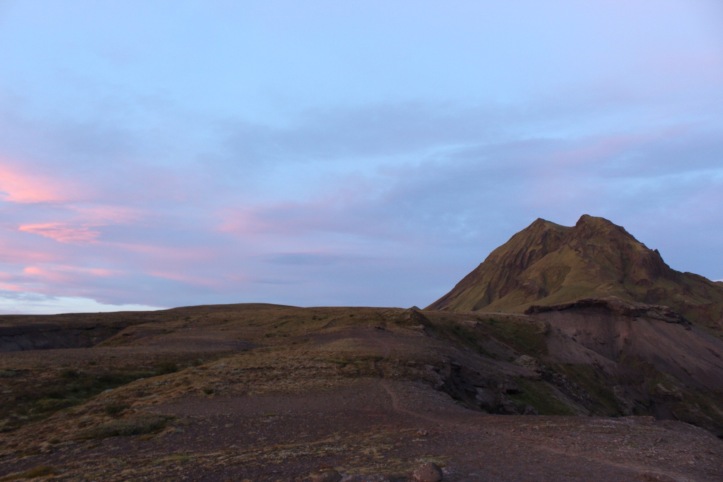 My 26th birthday started out well in this magical place. Happy birthday was chorused before I was even out of my tent, and in the wilderness it was the simple things that made it memorable. My group had saved granola and Skyr, and then we had cake for breakfast. We packed down the tents ready to head home later in the day, the showers beckoning for us. We walked the track to the viewpoint tidying the trail ahead of winter, and still had time for a quick jaunt up Tindfjall for a break with a view. After our final meal in the valley, in which I scored an extra segment of orange for it being my birthday, we made for Langidalur where all the teams would reconvene for Friday night. 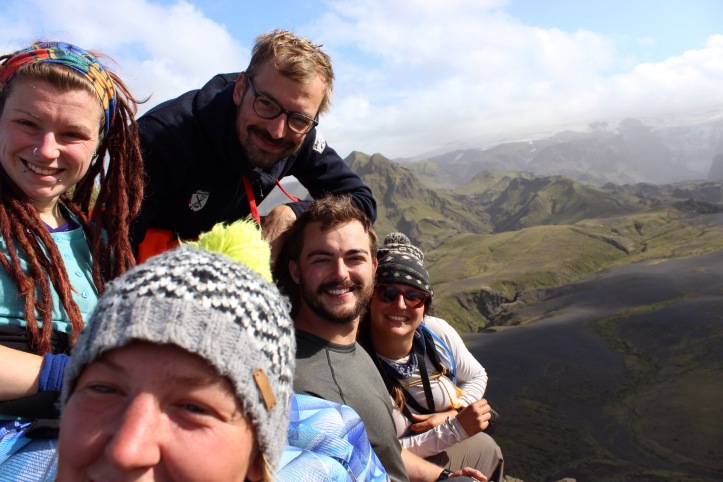