Don Quixote country – On the road in rural Spain

“This is the land of Don Quixote.. Don Quixote, y’know, the stupid guy on a goat who thought he was a knight.” -Blas’ explanation of the famous protagonist.

Sophie, Blas and I picked up the car and picked my brother David up from the airport for four days of road tripping through rural Spain. The motorway going north took us quickly from the hustle and into burnt red landscapes and scrub. In a small town we pulled over for lunch, leaving the demands of city life in favour of one choice menus and small town mentalities.
Our first sightseeing was in Tarazona, but upon arriving mid afternoon, the town was sleepy with siesta, the streets deserted. We explored the narrow streets of the new Jewish quarter, an area established after the Jews were under strict restrictions to be isolated from the Christians. The narrow streets wound up and up, hanging balconies and historic symbols describing a time past. In the square at the top of the town the first humans we saw were watering the sandy square. Upon enquiring we found out there was to be cows and bulls running the streets in an hours time. Throughout the small lanes red gates guarded the doors to prevent unwanted entry from horned creatures, and an air of festivity was just beginning. As more people gathered fair rides and confectionary started to set up, then the ambulance appeared, a mark of things to come. 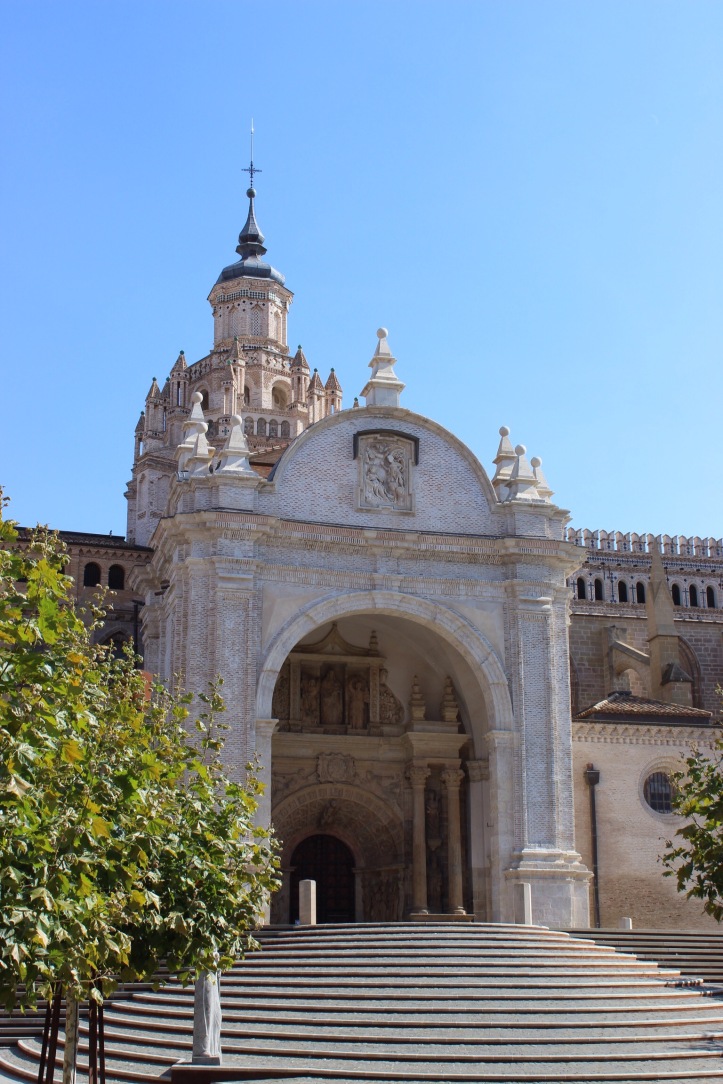 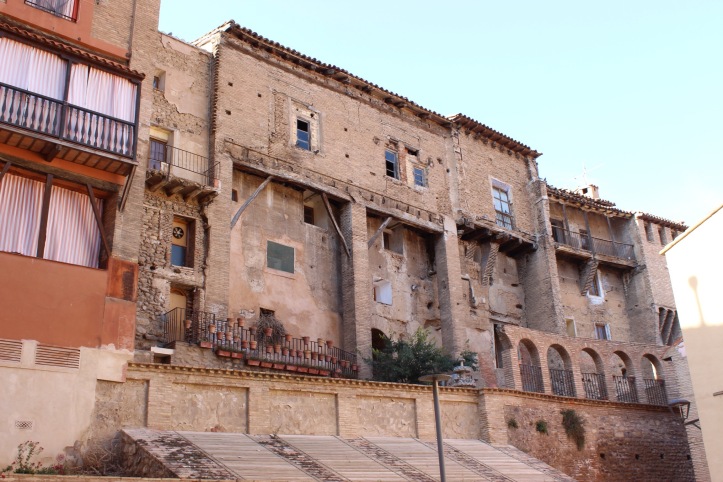 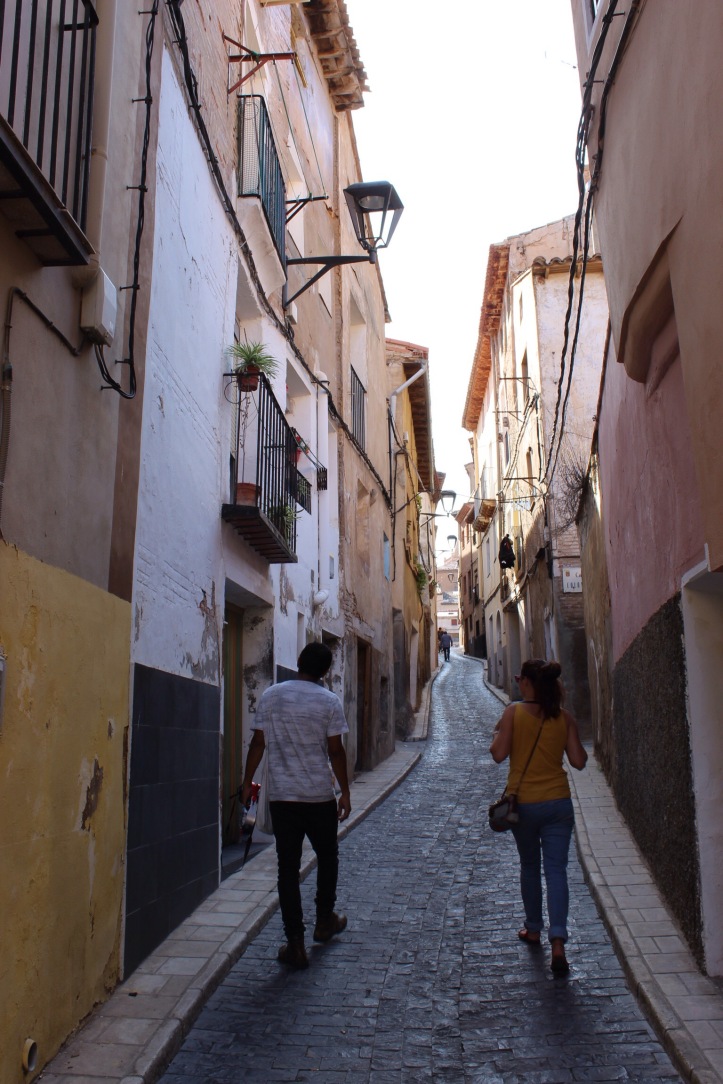 At 6pm a cow was released into the square. At first it was fired up and ran around, occasionally charging the gates, but as it calmed people of the community could slip through the gates and run infront of it, taking refuge behind the opposite gate. It would take chase, or kick its feet in anger. Once exhausted a bull would come out and round it up, and a new cow would take its place. The tradition of bullfighting appeared different here. Still a very community act, people sat out on their balconies or waved Spanish flags, Churros and Cervezas were enjoyed ringside, but anyone was welcome to take part. Young and old taunted the cows with body parts or clothing, dancing as much as they dared through the ring. 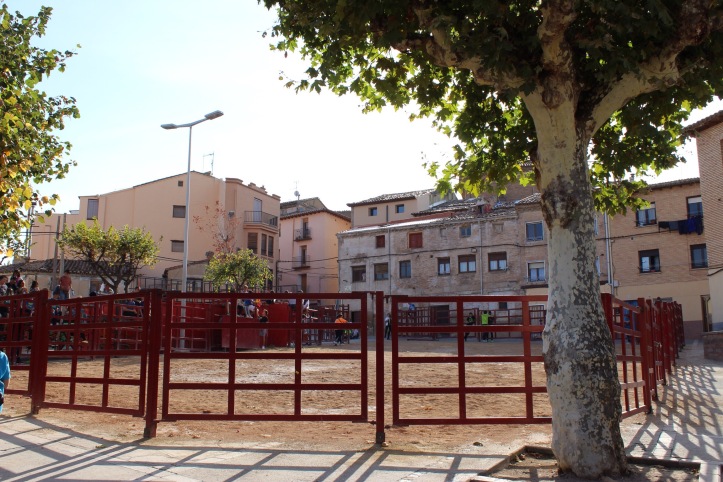 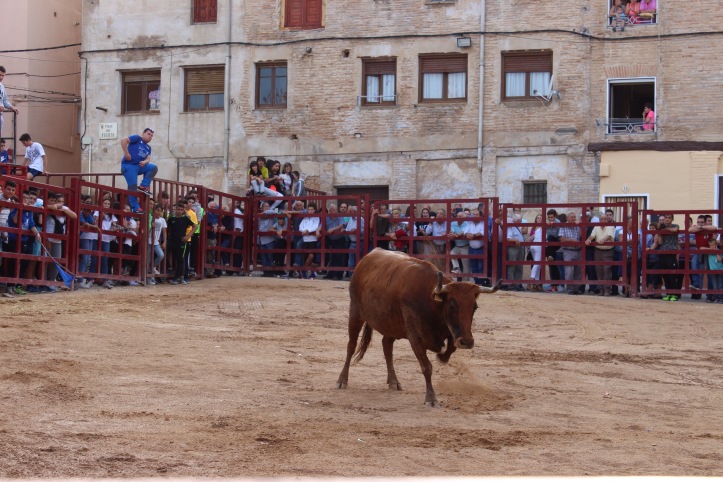 As the festivities continued we made for our hostel in small town Igea. The owner was waiting for us, clearly his only booking for a long time, and the final booking he would take as the hostel closed permanently, tomorrow. As such the quiet vibe of the town was reserved for us and we made ourselves at home on the balcony. Later he joined us and announced the bar open and free as a last night celebration. He was bemused that Igea was not more of a well know tourist hotspot despite being the hometown of the president of the La Rioja area, as well as the best tomatoes in the country (both big claims) which he promised we would try for breakfast. 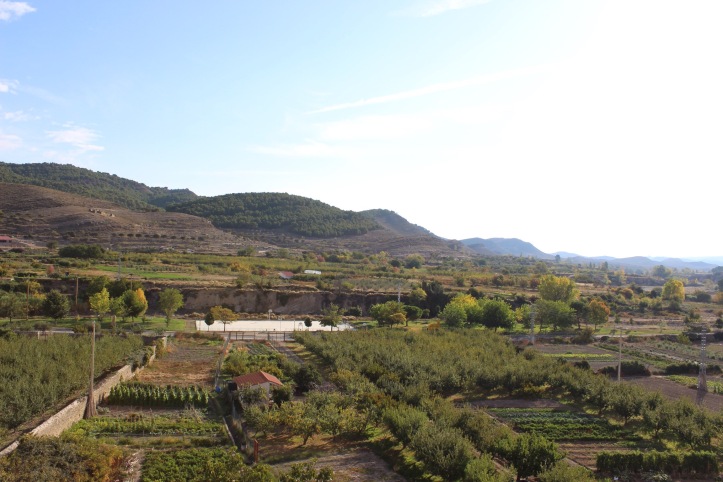 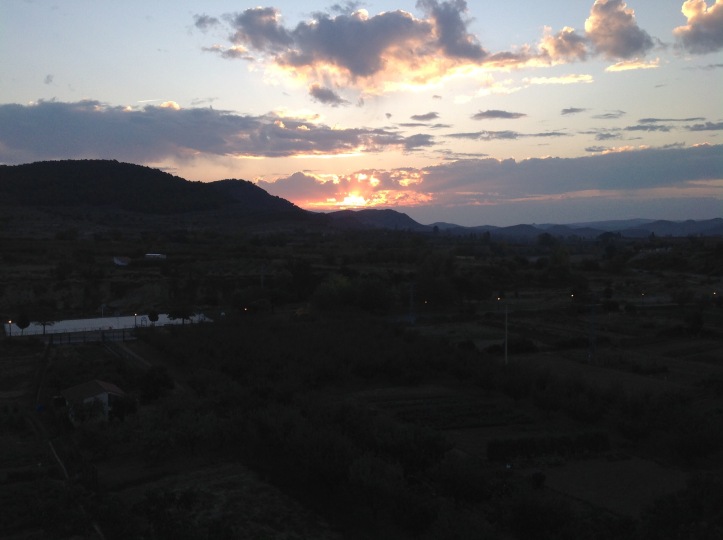 Come morning he drove us to his allotment to allow us to chose our feast, it was very reminiscent of small town living, a small, scrappy allotment with 150 tomato plants, each with fruits the size of fists. He also picked us sweet peppers, courgettes and walnuts to equip us for our journey.
Our destination for the day was Bardenas Reales National park, which quickly was like arriving to another, arid world. The dry, desert landscape was being circled by vultures in their pairs, the gravel road leading on among plateaus of orange rock. We drove around as if on safari of the moonlike landscape, taking pictures of strange rock formations and bare landscapes. 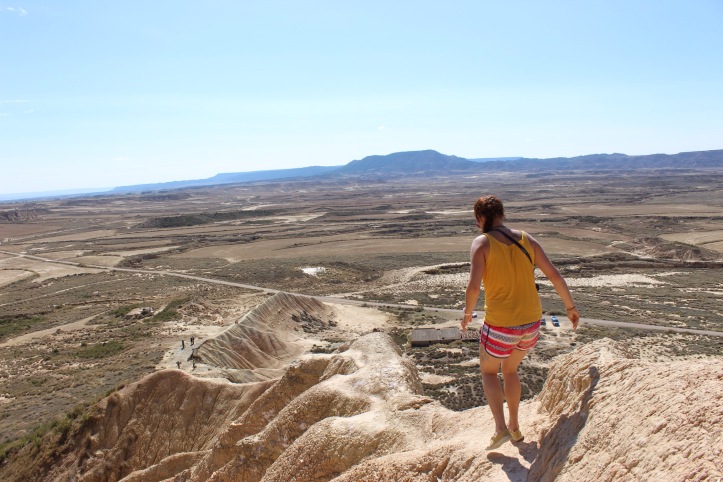 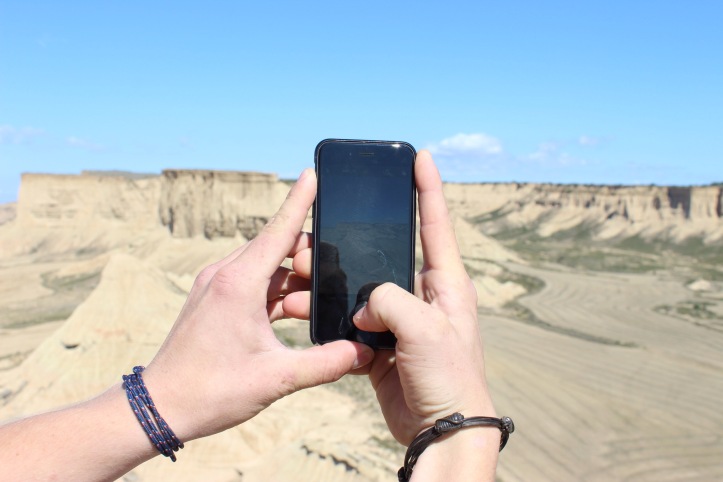 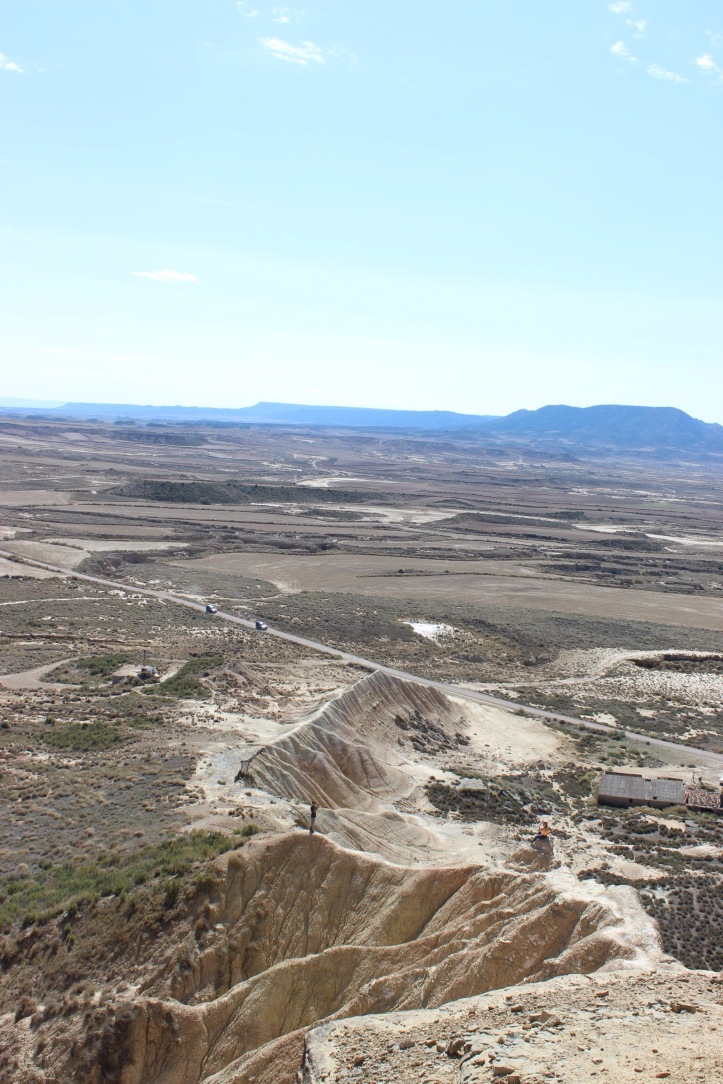 We hiked up knife edges of crumbly rock to look over the martian landscapes, the formations appearing to get crazier, bigger and more inventive the further we got. From the top we observed the herding of thousands of sheep, which looked like white iron filings. Caves and stone structures appeared where people had obviously dwelled before. 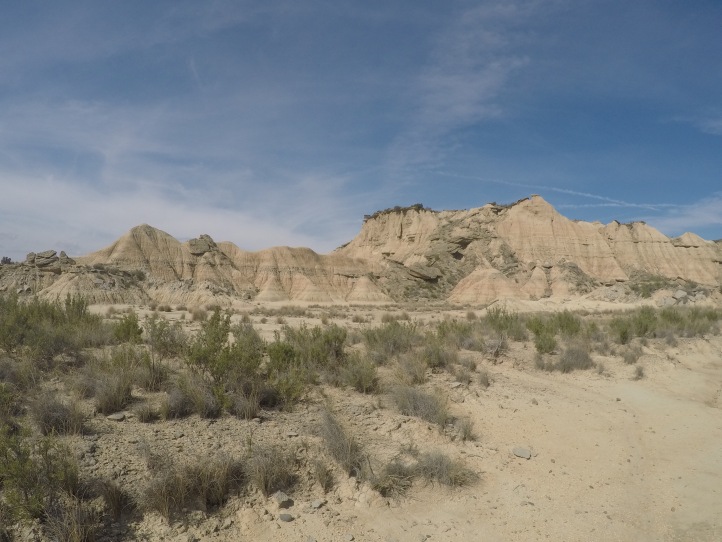 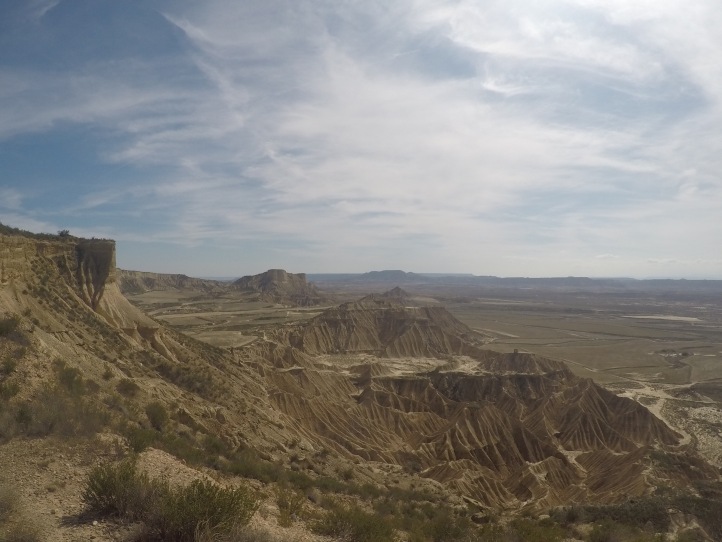 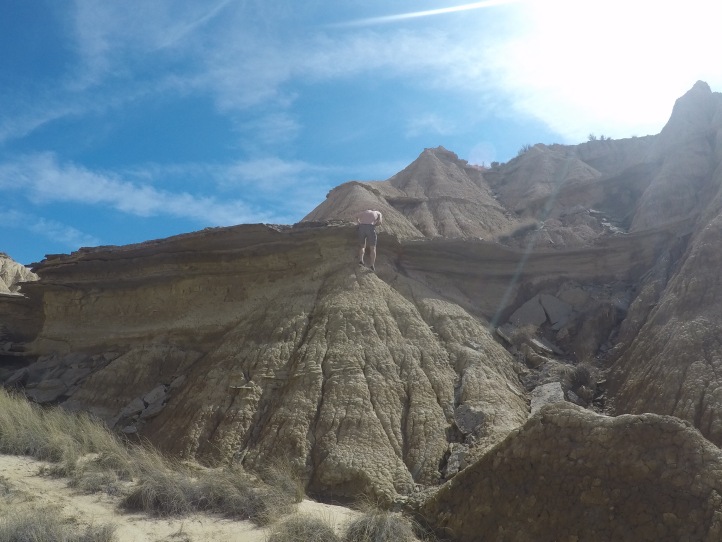 Sweaty and ready for refreshment we made for the next small town. Blas asked a guy where the town centre was and he laughed and said, what centre. Even so, there was a place for coffee, groceries and a town square where we were quickly identified as English with a passing smirk. 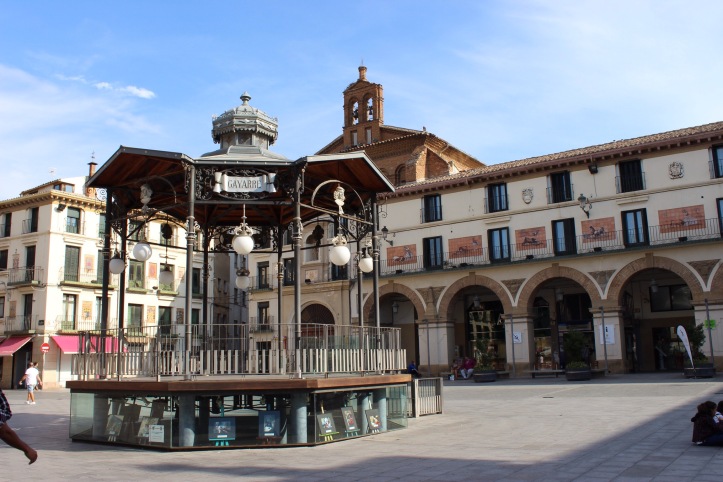 Next on our small town itinerary was Pozuelo de Aragon for a bed for the night. Our hostel appeared to be some run down social club, but upstairs was very accommodating save for an interesting welcome and needing to pay extra for bed sheets, which apparently were not available to us. Blas made lovely fresh food with out home grown ingredients and some Rosemary we had picked in the national park. We were living local.
In the morning we were saying goodbye to Blas, and going into the mountains. On the winding roads we passed only rounded rocks and reddish leaves, no other cars. We pulled over in the picturesque Calcena which at first appeared devoid of people as we climbed its steep streets. Surrounding the small settlement were caves and tumbledown buildings in the cliff side. Each corner revealed more terracotta pots, fig trees and winding vines, and eventually an old man tending his garden. That being said, we encountered several friendly felines. Many dogs came out to enquire our intentions. As we got to the village square, all the people were milling around waiting for the bread (unintentional pun) which came in as a delivery from another nearby village to restock the shop. An old man greeted us ¿Quien Eres? ¡No te cono zco! Who are you? I don’t know you! His friendly enquiry emphasised the small town feel as he knew the daily comings and goings of the square. 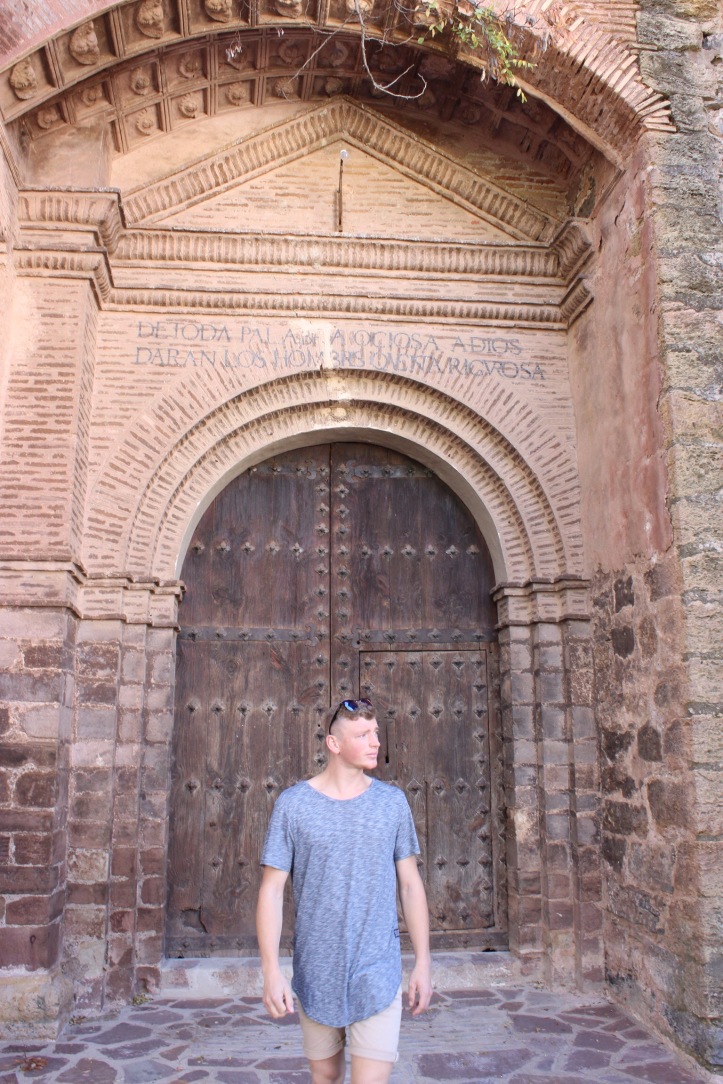 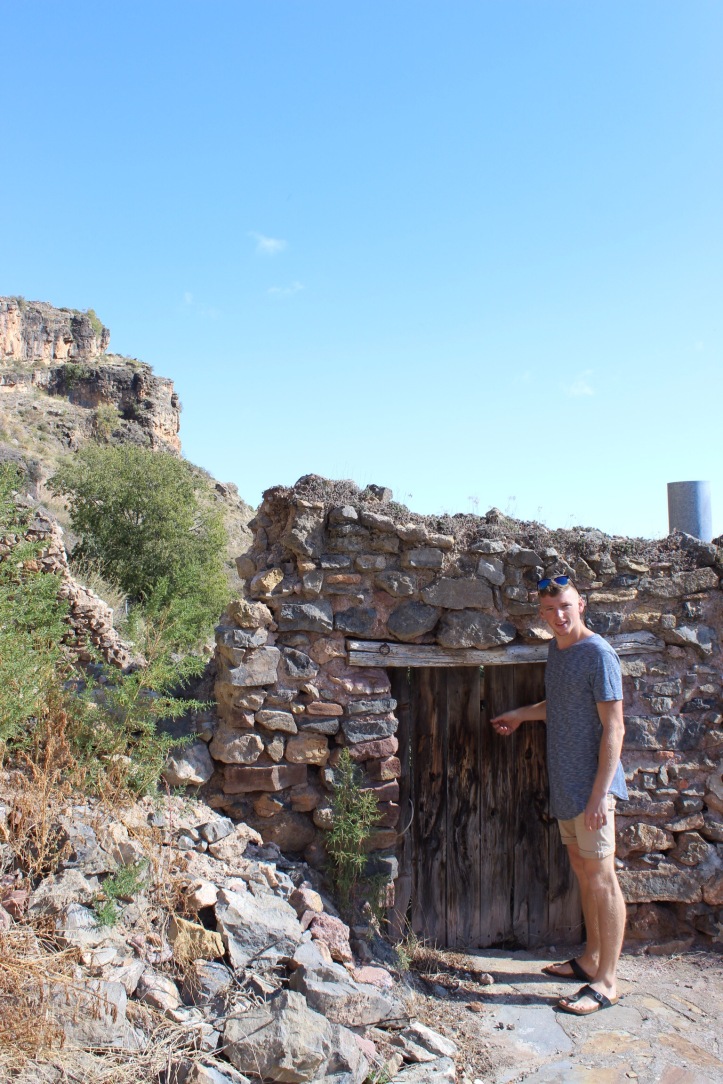 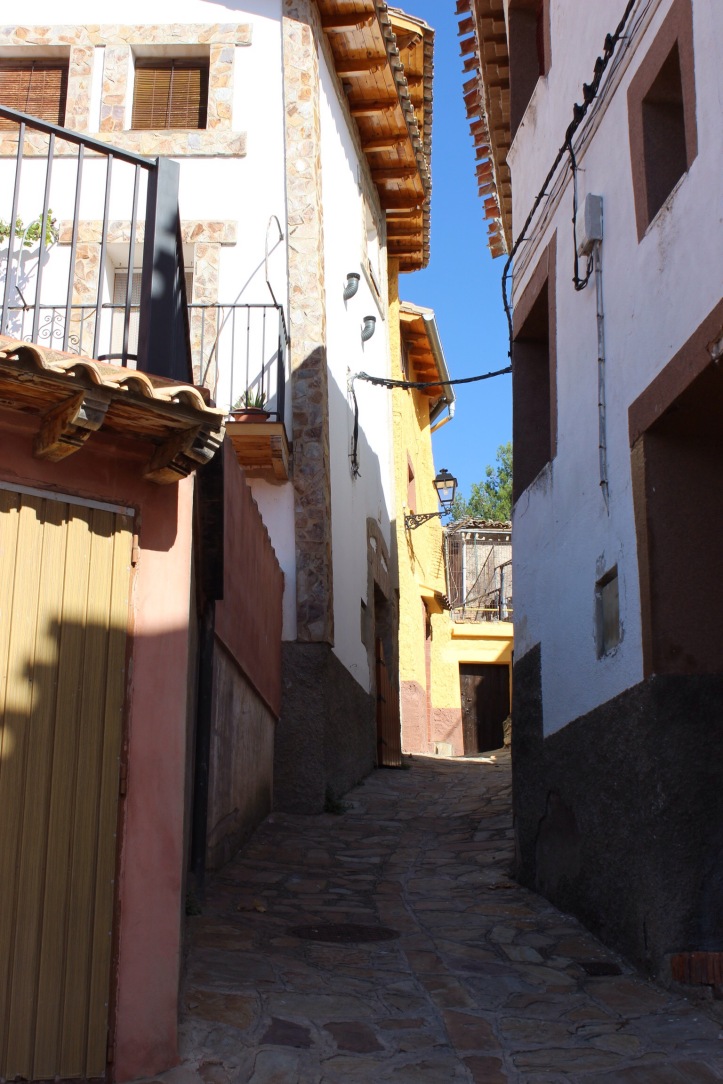 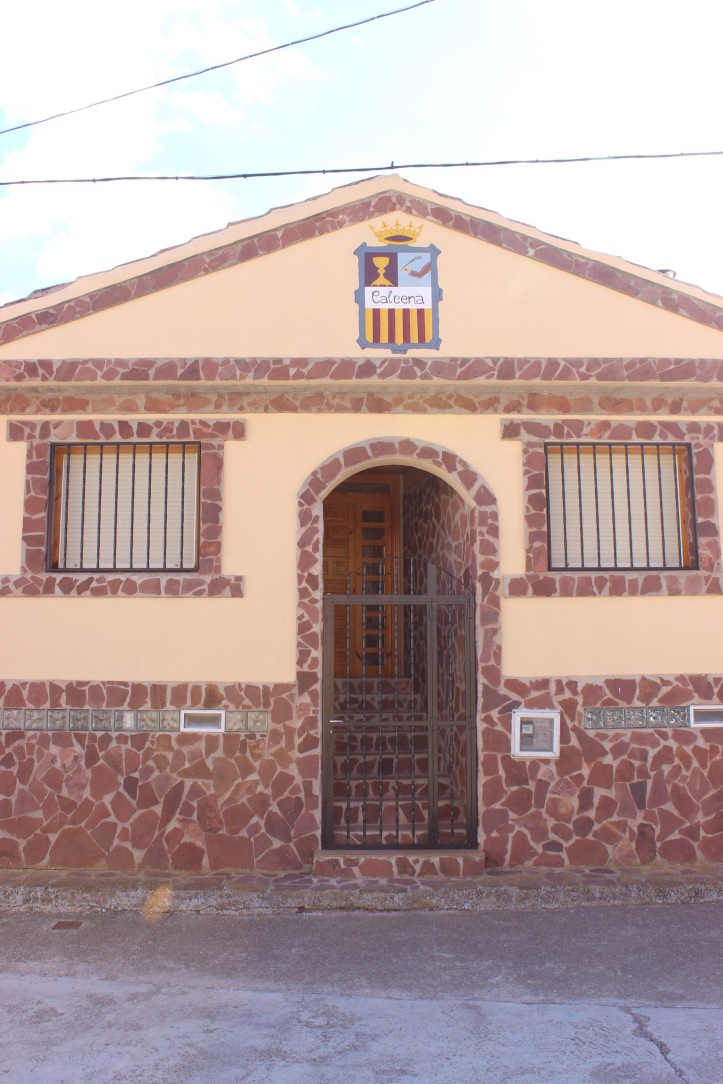 The next village, Purujosa was nestled in the hills. The compact, scrambled arrangement of the small houses was surrounded by the reds and oranges of autumn. We stopped on the approach for a picnic of bread, cheese and yet more tomatoes, then made for the small settlement to park up and hike. We spiralled around the mountain looking out over olive trees and eventually looking back across to the village. With the midday sun building we took a steep track back down in search of refreshment. The friendly Albergue quenched our thirst with a view of the Moncayo national park and a feeling of no one for miles around. 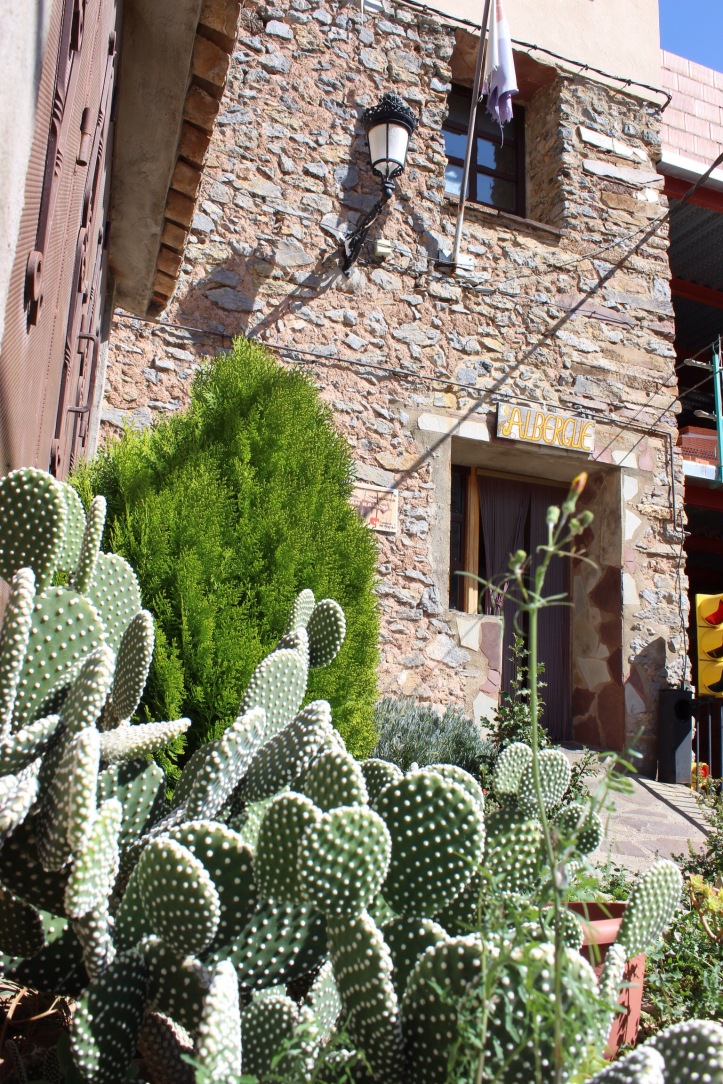 Along the road we passed now other cars, but more beautiful small towns such as Arunda de Moncayo, and bulbous rocks just looking to be climbed. We were in our evening stop of Aniñon by mid afternoon and found our gorgeous accommodation very close to the castle like church. (Not quite touching distance as David pointed out.) Our first adventure was bringing the car into the small streets of the hillside town. It was a 5 minute walk from top to bottom, but a 20 minute adventure of breath hold turns in a car, but it accentuated just how arable and self contained the town was. 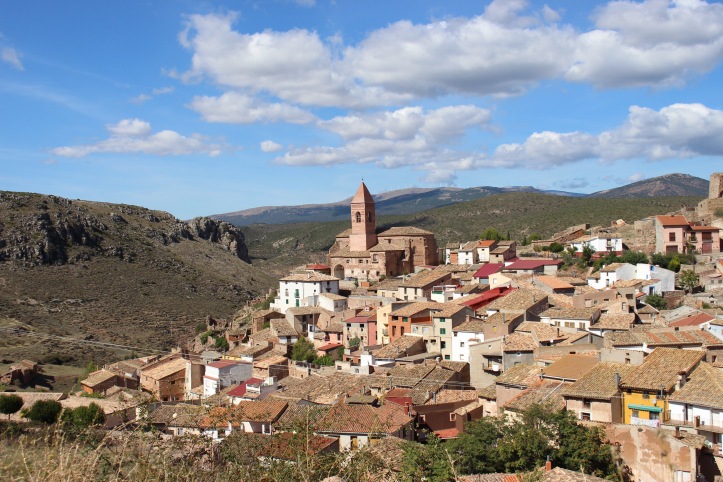 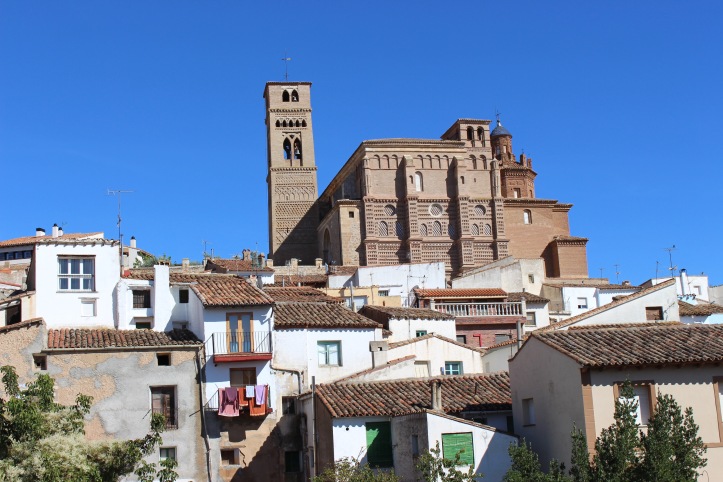 We had coffee, ice cream and beer in the square and marvelled the colourful houses and terracotta pots of the beautiful town. Passers by made conversation with a welcoming sense of humour, dogs came to check us out no we watched the carefree play of the young children, before investing in some local wine for €2.50 and heading to the vantage point of our sunny terrace to watch the sun slow towards the horizon. 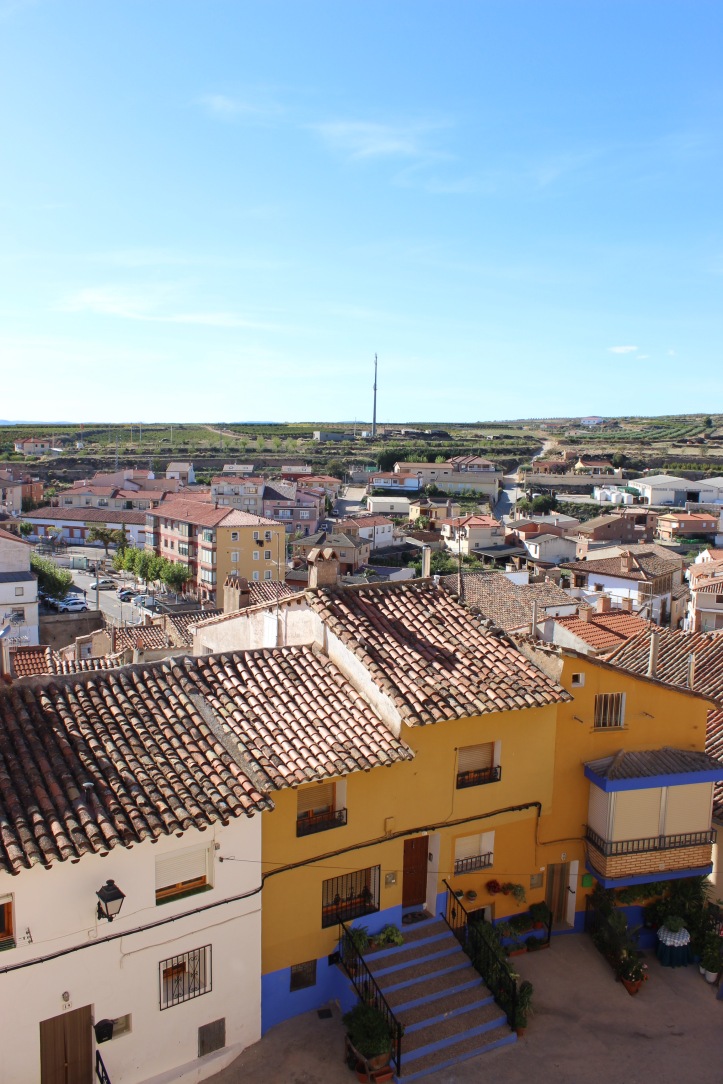 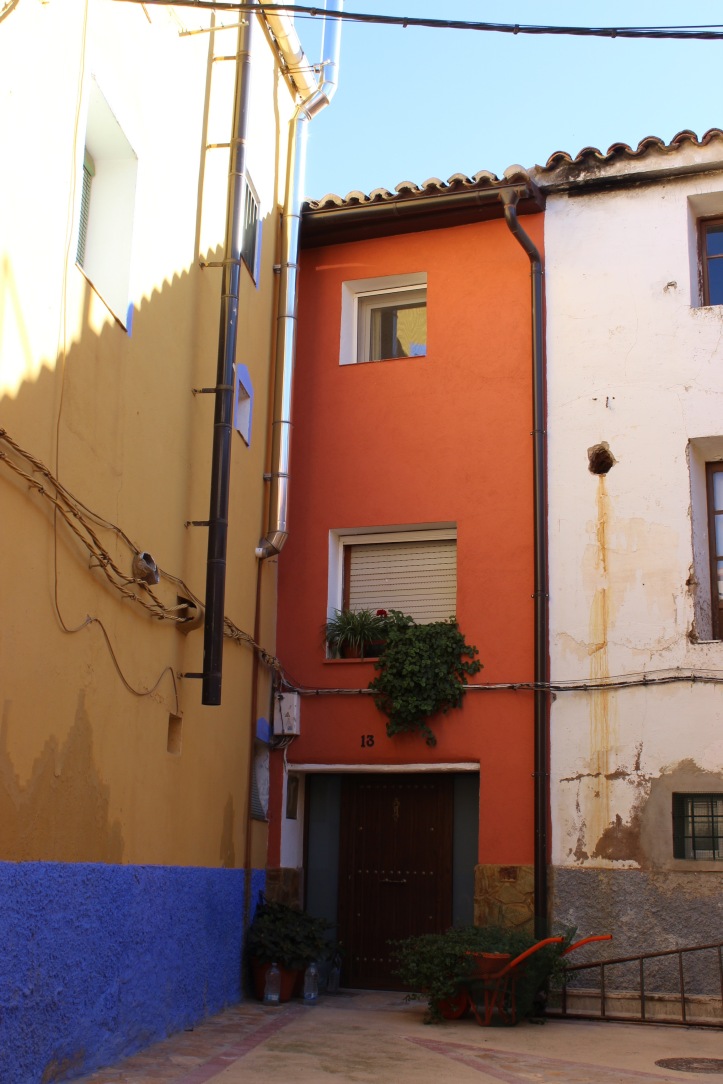 For dinner we had a three course meal with wine, coffee and aperitifs for €13, which aside from being incredible was a great way to try the local cuisine. Our patchy Spanish and brief use of google translate made for some gambled choices, and between us we tried a variety of cold soups, cured meats and local treats. There was lots of joviality, laughter and reminiscing as my last night in Spain came to a close. It was special to have spent the time with David and also to have caught up with Sophie so soon after our summer in Iceland together.
Getting the car back through the winding streets was just as much of a team effort, and David managed his first car journey without falling asleep, albeit 10km. We stopped in small town Calatayud, where it looked like half the buildings in the sleepy old town had ceased to exist and had crumbled into the floor. We climbed up through odd streets and paths making for the castle on top of the hill. Castillo de Ayud is a 9th Muslim century castle, now in ruins and looks long forgotten. Despite signs around the place, the ruins were a health and safety nightmare. You could go inside the lookout towers to discover the stairs dropped away into a dark pit. David enjoyed being Indiana Jones, as I preferred to play on the swings. He took on lookout duty and patrolled the walls of the crumbling castle, the view over the city enviable. 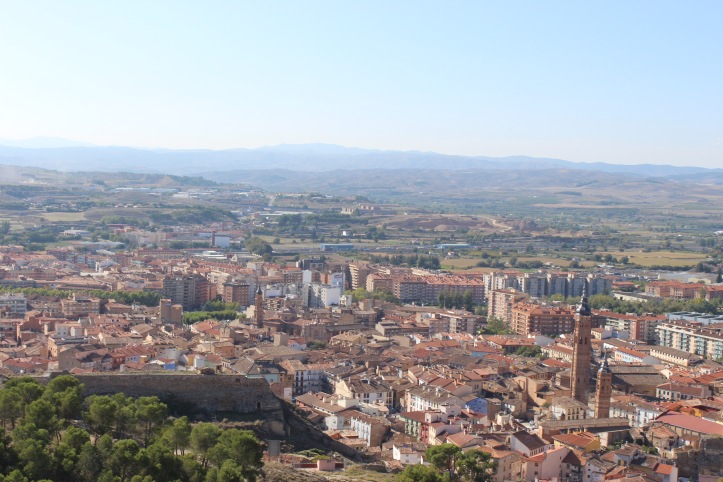 We had coffee in the square and joined the motorway, making our way the long way back to Madrid. We took a picnic lunch, bread and cheese being the recurring theme of the road trip, at Medinaceli, a town of Roman ruins sitting high above the modern road. It was the first time we had encountered tourists, and certainly the closer to Madrid we got, the further we felt from our deserted, windy roads. The towering rocks and red soil subsided for more barren lands and small trees as we made for the airport.

With two weeks in Spain coming to a close, I couldn’t have been more amazed by the secrets of this fascinating country. With so much history and colour, the relaxed lifestyle, constant weather and unhurried feel of the small towns, I felt privileged to have seen such a beautiful part of Mediterranean Europe, and have many reasons to come back.