If leaving Whistler didn’t sink in until we were on the road out, travelling to Cuba didn’t hit until we were on the road into Havana.
The journey took a full day, from Vancouver via Mexico City, picking up our tourist cards at the airline office and boarding our flight to Cuba. Immigration was female dominated and feisty. Fishnets are still a thing here. Our luggage had fallen victim to a hailstorm in Mexico and was waterlogged as we waded through arrivals to meet a man with a paper sign ‘Lauren y Monique.’ Touchingly the other taxi drivers joked about swapping with him and he grinned as we emerged into the humid night to change our money and head to the city.

There is two currencies here. Cuban Convertible Pesos (CUC’s) are tied 1-1 with the USD and used in most things of value. CUP’s are used for everyday items, mostly by the Cuban people as 25 CUP =1 CUC. Canadian dollars, Euros and sterling are quite welcome to exchange in Cuba and we were carrying our entire trip budget in cash. Leave your USD’s at home as they incur at 10% additional tax.

The taxi was yellow, a tired car with no lights on the dashboard and seemed to limp the 30 mins to the city with our heavy luggage in the boot. The city streets were filled with tall town houses, several stories of grand, tired architecture. We would be staying at a Casa Particulares. These are people’s homes that welcome visitors with their own room and joining bathroom, a common alternative to hotels or hostels. We were shown to our room, quaint and pastel coloured and knew we would be very comfortable here.

In the morning a fresh breakfast of omelette, fruits, bread, coffee and juice was served with a generous dose of Spanglish from both sides. Of course, what better way to start day one than with a walking tour. We walked past the impressive Capitolo building and into Habana Vieja, the old town. It was like a European city had been transplanted in Africa. On the streets we turned heads but didn’t experience hassle, just the odd enquiry of ‘where are you from?’ It was freeing to wear whatever you wanted. Nothing was too short, too tight, too colourful. Whatever the body shape someone else had worn it first. Women wore crop tops, short skirts, body suits as well as bandanas and full dress. Patterns, shapes and colours were to be worn boldly without consideration of clashing. Cars in every colour, Chevys to T birds, huge tanks and bike taxis, all with horns which seem extinct in the modern world. That being said the roads weren’t busy. With 27,000 cars for Havana’s 4 million population, the guide joked this is Latin Americas greenest city. The smell of gasoline suggests otherwise. 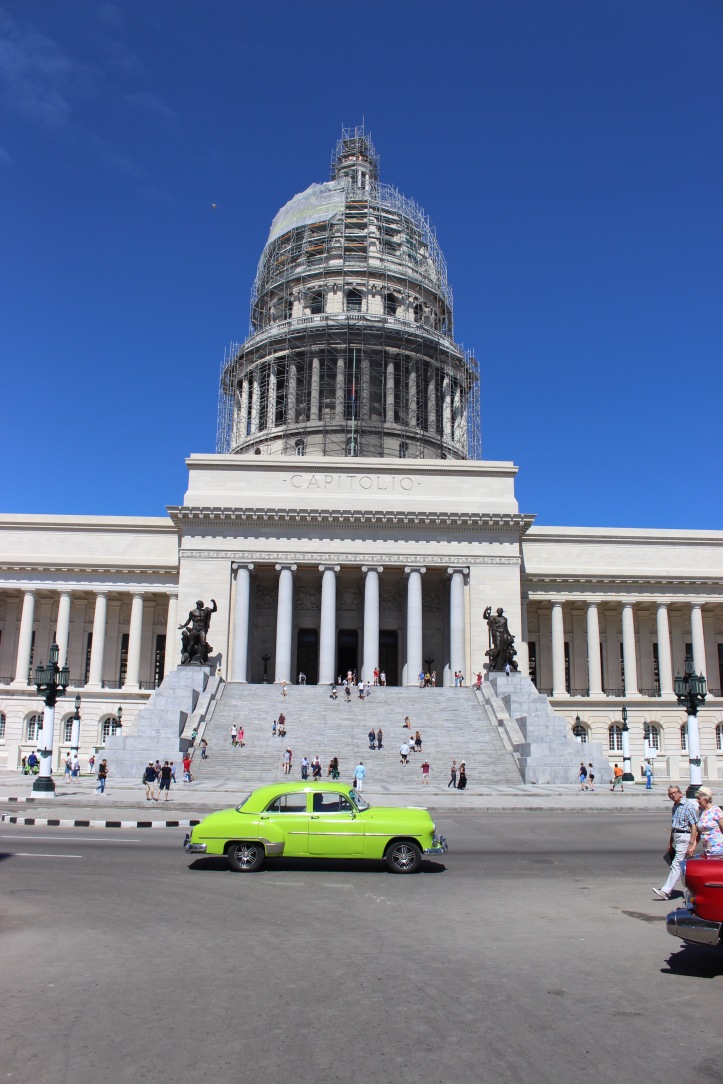 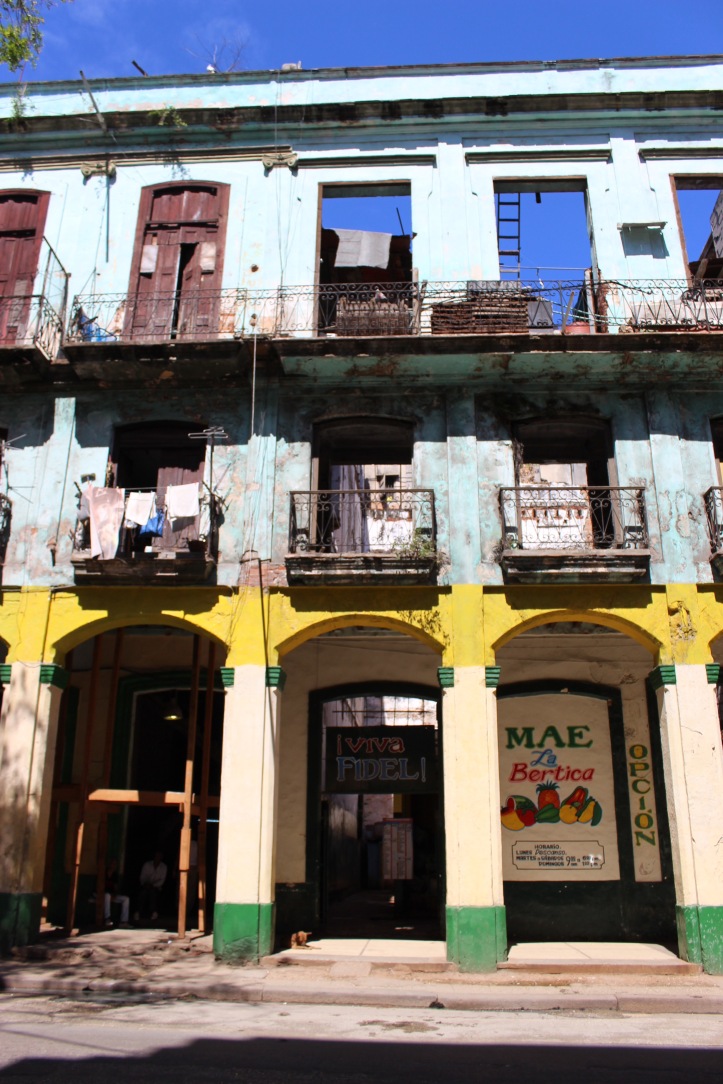 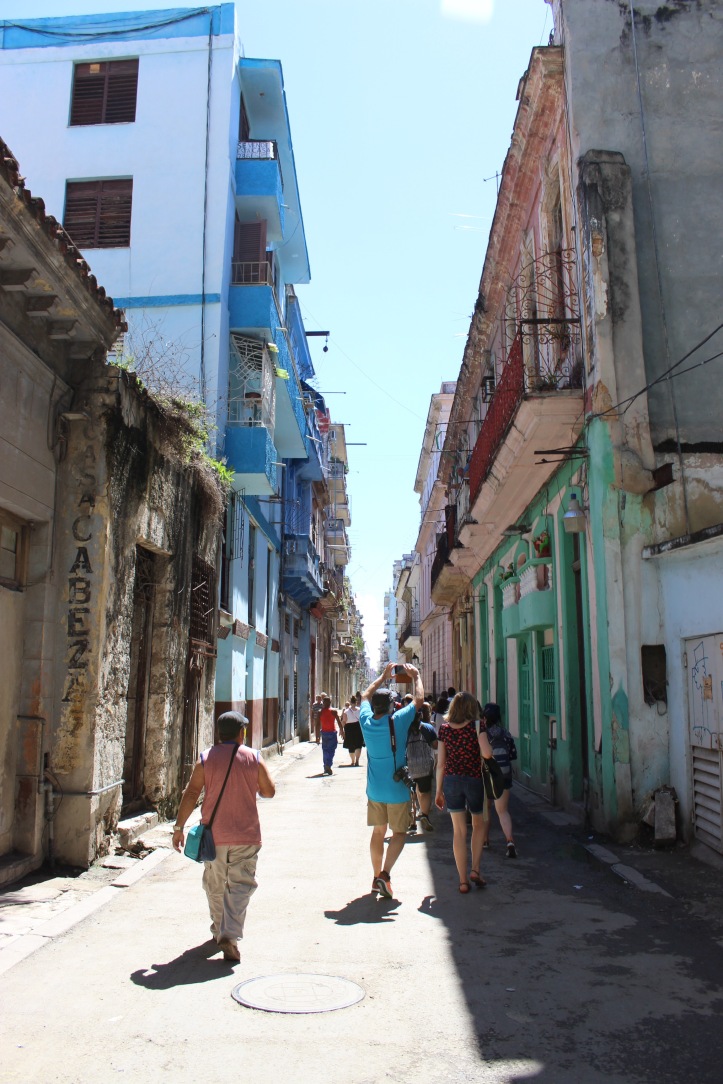 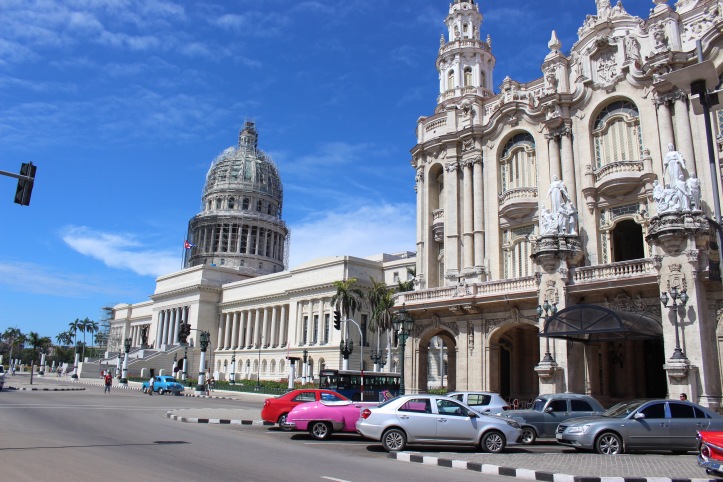 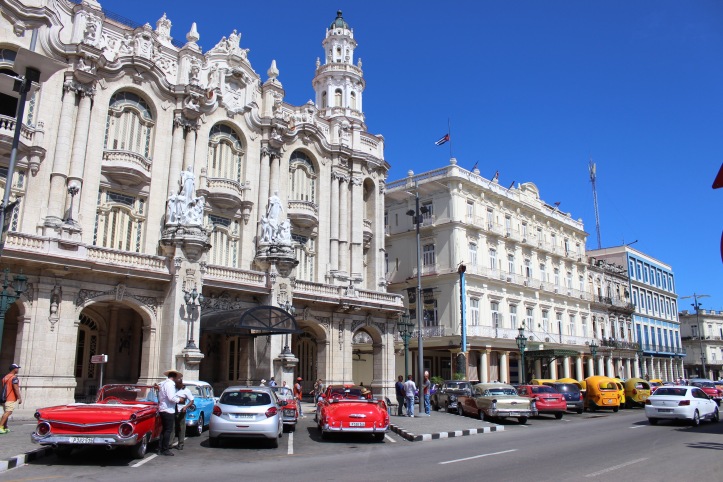 The streets were lined high with several stories of town house. We were warned early on to not walk under the balconies, they sometimes collapse. In places whole buildings seem to have crumbled, but the ornate and unique beauty of each one was fascinating, large doors and colourful facades combining Spanish past with Caribbean present. The noise from the street was constant. This is Cuba, honk when you want! 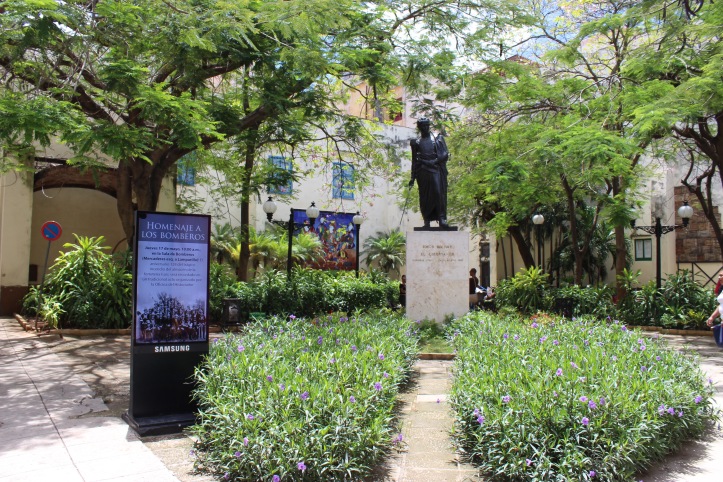 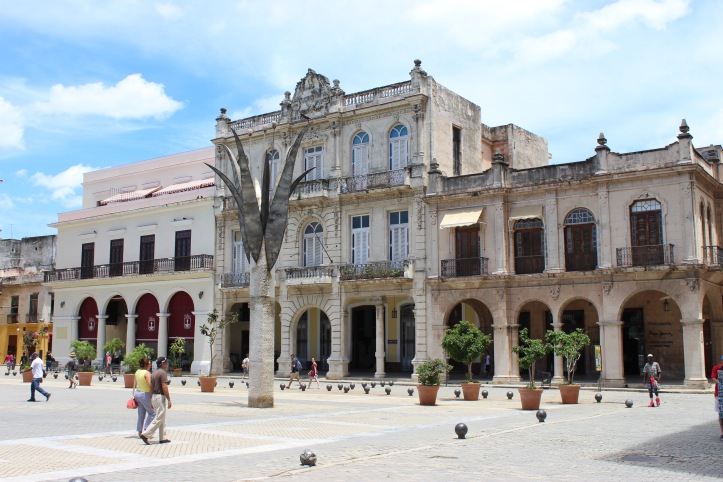 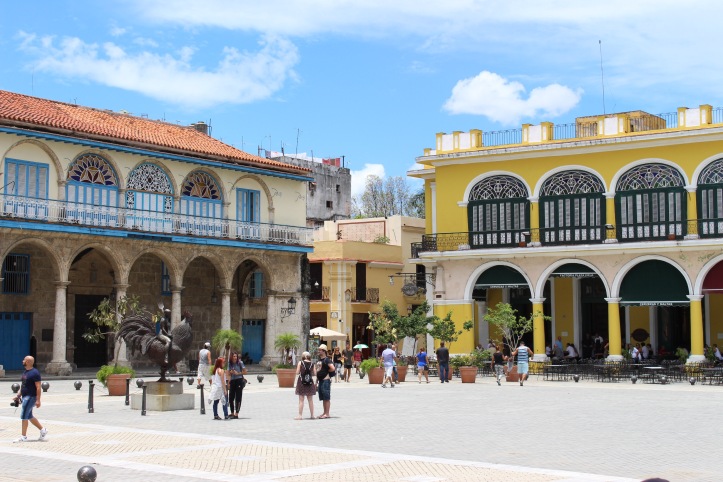 Much to Monique’s excitement, dogs and cats were everywhere, slowly moving in the humidity. They are controlled using ID tags and while charities work to have them spade, ones without identification are ‘sacrificed.’

What we were told about Cuba’s history, the revolution and the now, was often confusing, as if missing some sort of backstory. Seven years ago when private enterprise began to be allowed, private restaurants and accommodation began cropping up. The rules are blurred enough to suit both parties, allowing the government to tax heavily and make sure nothing is truly owned, but leaving room for negotiation, a black market. We were told public establishments will be waited by middle aged men with pot bellies, wheras private enterprises will employ the young and good looking to get you to the second floor where private business will be situated.

The narrow streets were a grid like maze, some pedestrianised using decommissioned cannon balls. These would open up into colourful squares where people were passing time. By the water, the Plaza Vieja houses the cathedral, a relic of Catholicism which at one point many were forced to worship. The African religion of Santeria adopted many of the catholic saints so that worship could be tailored to the popular religion which worshiped gods of the land and elements.

A large crowd gathered outside the Bodeguita del Medio where Mojitos were lined up on the bar, the favourite spot of up and coming writers, including Hemingway.

We joined the guide for lunch already knowing our vegetarian diet would be a disappointment to him as shrimp and lobster come highly recommended. Even dishes like fried chickpeas have a sneaky dose of meat, so we stuck to entres and sides. The freshness of the produce means things are usually cooked with flavour, if not imagination towards plant lovers. The heat of the day had us pretty wiped out and we headed back for the refuge of AC.

We emerged from the room some hours later to find some food which always comes served with an accompaniment of Mojitos and music. Whilst sitting over our food, the skies opened and the roads turned to rivers within minutes. We contemplated the walk home for a few seconds before hailing a bike taxi with tarpaulin sides and roof. It had a gear lever as if a manual car. The thunder was peeling loud and huge forks of lightening illuminating the dark streets, feeling very tropical.