The wildlife in Blackfish Sound has been over and above anything I ever imagined.  The volume of wildlife, the proximity of our interactions and the peepholes we have had into their behaviours.  Whilst it is always an adventure being on the water, there is a few interactions which were adrenaline filled, unbelievable, unforgettable.

The Humpback Whales have several different feeding methods but as the summer drew on, the lunge feeding grew more and more.  The birds were the telltale sign that a bait ball of herring was forming underneath being attacked from all angles so by watching the birds you got the best prediction of where a lunging humpback would surface.  Time and time again these majestic creatures lunged and yet it was always colossal, the weight of this huge whale engulfing these tiny fish and landing heavy back in the water.  On this one occasion we were floating, engine shut down watching the balls form and be engulfed, form and be engulfed when we noticed we were becoming the bait ball.  Birds overhead and little time to react, a humpback lunged not 2 metres off our port side.   The split second movement started with thousands of fish lurching upwards followed by a mouth that looked like it could house you and and your family.  Hearts were racing, giggles were taking over and the photographic evidence was blurred and far too zoomed in.   Our heart rates returning to normal, the whale lunged a second time, this time off our starboard side, again narrowly missing the boat.  My blurred photograph is my favourite photobomb of all time.

I wasn’t sure anything could compete with this close encounter until a foggy morning a few weeks later.  The water was quiet with the end of the season nigh, when a dorsal fin popped up on the horizon.  Excitedly I ran over to tell Ryan and we crossed the sound to get a view of these Orca.  Most of our encounters have been with our fish eating Orca and the large number of Sealion still in the water suggested that these were also fish eating or the Sealion were blissfully unaware.   That being said, it was a small group and they were silently disappearing underwater and emerging again sporadically, hard for us to follow.  Hunting.

Fish eating and mammal eating orca were thought the same until 1980 when it was realised they are entirely seperated and have likely not interbred in 700,000 years. Currently classified as different ecotypes, they may one day be classified as entirely different species as they feed on different tropic levels.

All of a sudden, an avalanche of Stellar Sealion, of which there was several hundred on the rocks, slid into the water.  The Orca had tactfully seperated one from his friends and had it encircled.  They knew it was in their grasp and they were celebratory, jumping from the water, sometimes four at the same time, breeching, tail slapping, singing.  The Sealion were rearing up in protest but keeping their distance.   Still, there is no such thing as fast food in the animal world.  The group of six orca, young included, were now going to exhaust and toy with their food before making the kill.  The fight was a performance showing the might of these creatures.  They swam fast over it, breeches on top of it, pulled it under to tire it.  It seemed the young were being taught how to hunt, taking turns in the process.  With the flood happening, the battle was on the move covering several kilometres and a few hours before finally the behaviour changed, the kill had happened underwater.  The orca took long dives to feed then came up to breathe or celebrate.  The birds moved in, not a morsel wasted.  They are highly social creatures and the food would feed the group, another reason this type of Orca travel in smaller groups. With all mammals now on high alert, these Biggs or Transient Orca will now have to move further for their next meal, let the dust settle before they can feed again.

Finally there were the encounters that brought home the realisation that we were on a small island in a large ocean, and wildlife watching from land, is in our habitats colliding with them in theirs, was extra special.  A few times this summer the Pacific white sided dolphin have swam through the channel adjacent to us.  It is around 50 metres across meaning that standing on the rocks, looking down, you can see flashes of silvery white as they move through the water.  These super pods of dolphins often number in excess of 100 and move together like a slick team, a noisy ferocious line of silver, jumping and splashing in what at first looks like boat wake. 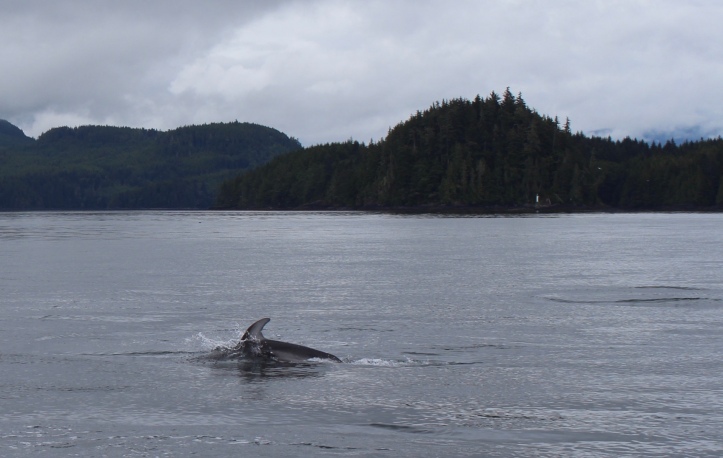 And for every small amount we encounter, many more questions arise about their world and what they are up to, the mysteries of these amazing creatures outnumbering the answers.

Orca Dreams is a whale watching safari based on Compton Island in Blackfish Sound. JD and Kelly are Vancouver Island locals who host guests in the experience of a lifetime. Find out more at Orcadreams.com