Its been a summer spent on the fringes of Vancouver Island, but from the friendly small towns of the north, the scenic drives through the centre to the sparkling gem that is its biggest city- Victoria, it has been magical to explore its beauty.

Telegraph Cove is an adorable collection of colourful houses, a boardwalk and a dock but to island dwellers, its the big city.   Crossing the waters for a beer whilst you wait for a load of laundry practically counts as a night on the town.  While it bustles in the summer, TC as its affectionately known, is home to 6 people come winter.  It was named after it became the northern terminus for a telegraph line and had modest roots in lumber and salmon. 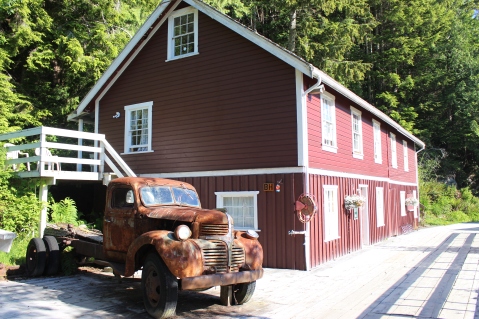 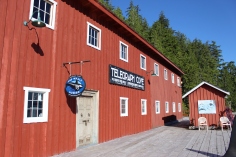 Its star resident hangs in the whale interpretive centre, the skeleton of Finny the fin whale who unfortunately ended up riding the bow of a cruise ship from the open ocean all the way to Vancouver harbour in 1999.   They exhibit so much information on the local wildlife including the results of Michael Bigg’s research which grouped the Orca into different language groups.  On the centres final day of opening for the season, we managed a visit.  Finny now has a neighbour, a local transient killer whale skeleton.

The north end of Vancouver Island is remarkably less populated than the south, however a trip as far up the highway as Port McNeill will lead you to encounter such friendliness in the small port side communities.  In August whilst mum was visiting, we embarked on a road trip from our small corner, heading down the highway to Courtenay and on, to Tofino.  We explored using the 19a, the original island highway which hugs the coastline on the east side of the island, across the water is the towering mountains of the mainland.  With it being the first time leaving the island in two months, it was novel to eat pizzas and be indoors, but even more novel to find goats on the roof in Coombes, a little hamlet of shops and markets.  Undetered by passers by below, the goats happily grazed on the rooftop. 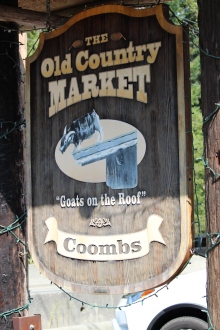 Heading west across the densely forested island the road is reclaimed from Old Grove forest.  Hundreds of years old Douglas fir tower over you with occasional lakes piercing the tree cover.  As the surroundings become more rocky, the road begins to wind, yielding to natures demands.  At the fork in the road, left is to Ucluelet and right is to Tofino. 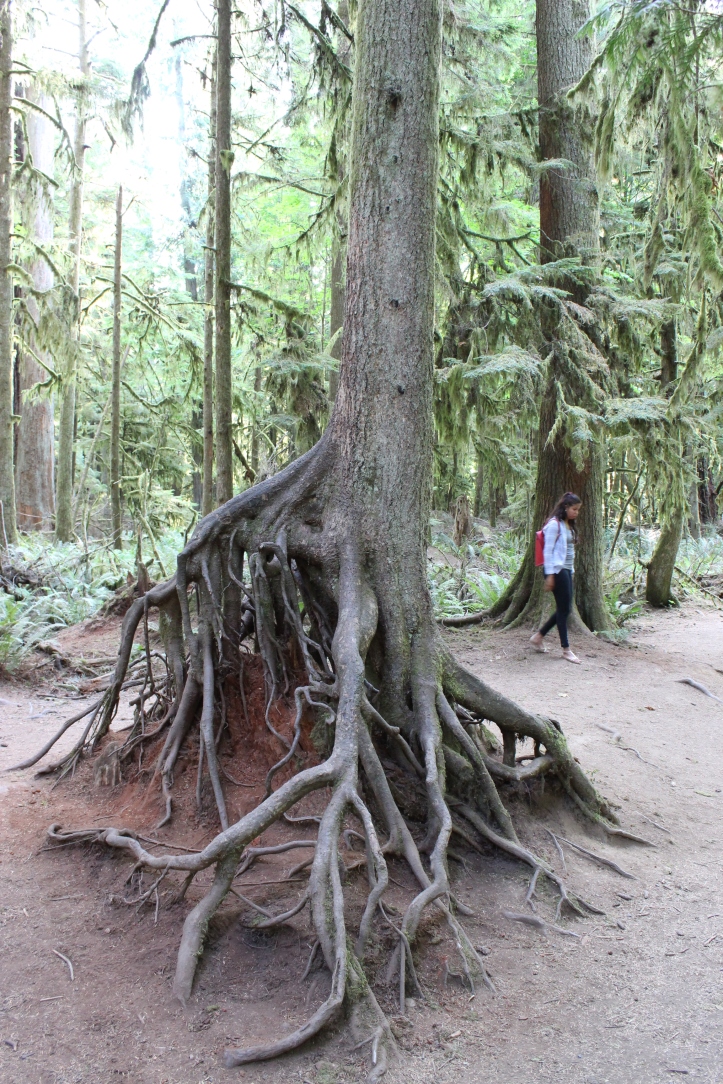 Tofino is a small surf town on the edge of Clayoquot sound.  Bustling with surfers and whale watchers, the small strip of shops is bustling in summer but answers the call of storm chasers in winter.  We enjoyed the endless coffee shops, eateries, jewellery stores in complete contrast to our island home.  However, we opted to stay on Meares Island, just across the water from Tofino by 8 minute water taxi.  There, the Lone Cone campground and hostel was perched on first nations land and was front row to an amazing sandy beach.  Here we did much the same as we would do on Compton whenever we got the chance, enjoy a glass of wine on the beach.  On my birthday, Shantelle and I braved a dip in the ocean to commemorate my 27th year, mostly just to prove we were tougher than some boys from Ontario.  The slight contrast to Compton though was the wildlife.  Three cows strolled down the beach, unperturbed by us, occasionally playfully frolicking in the sand.  As we sat and let the afternoon pass by with the splashing of the tumbling waves there was a proposal, some cows charging the newly engaged couple and finally, rumours of a beach fire materialising. 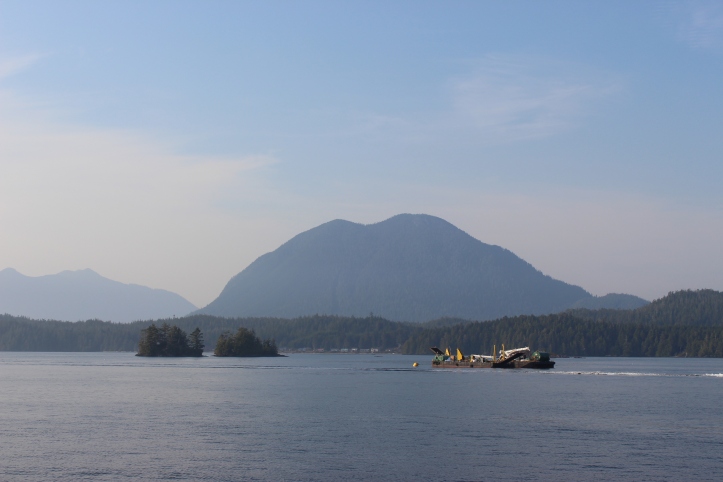 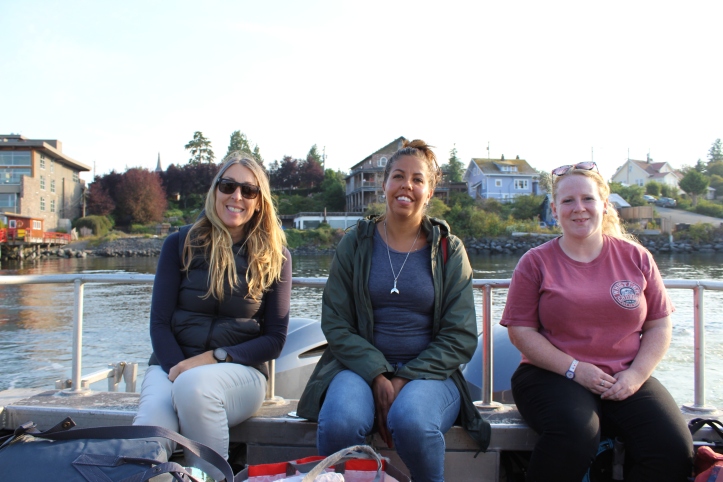 Ucluelet is Tofino’s younger brother.  Still with coffee and BC beachside culture oozing from it, it is quieter, but we enjoyed the rugged coastline of the Pacific Rim national park made eery by its famous August fog.

Finally, at the close of the season, we would end our time on the Island in its city, Victoria.  When I asked Kelly for recommendations of things to do in Victoria, her childhood home, the reccomendations were far ranging.  My favourite was her suggestion that in her teenage years, at night, with a group of friends, they would head to the waterfront to a building which is illuminated by purple light from below.  They would stare into the purple light until they were blinded by its brightness, then look around at the harbour, the government building and the empress, the gorgeous Victoria skyline, and see it all in purple.  They called it the purple city.  Unfortunately, we didn’t get around to it.  My second favourite suggestion of hers was cheesecake at Pagliacci’s bar.  A busy restaurant on a side street, this welcoming little spot had live music and big serves.  On our first night in the city, Shantelle, Monique and I shared our summer stories over a slice of the good stuff. 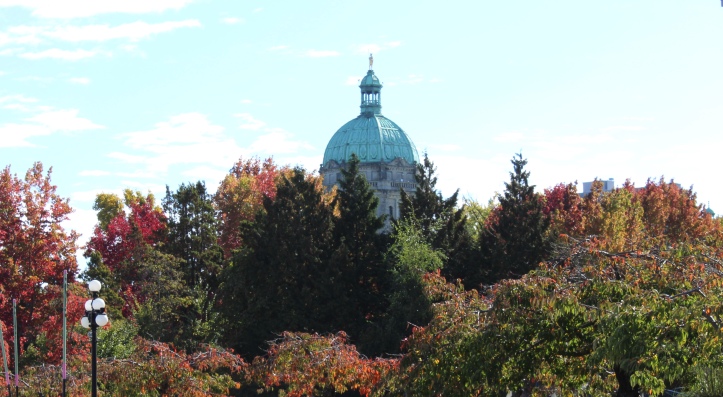 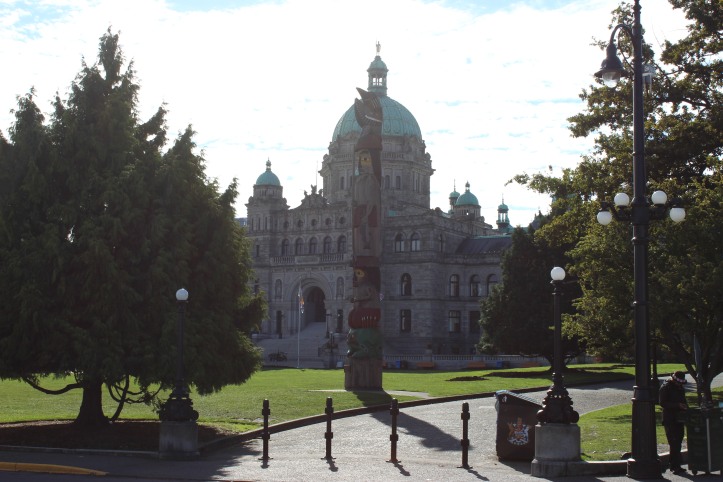 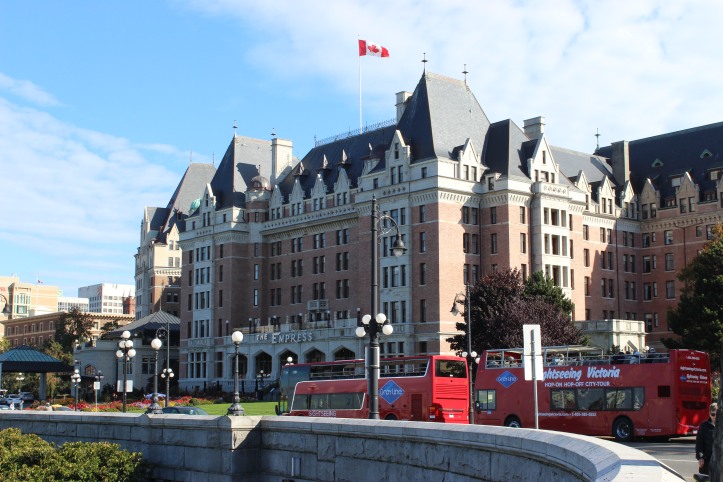 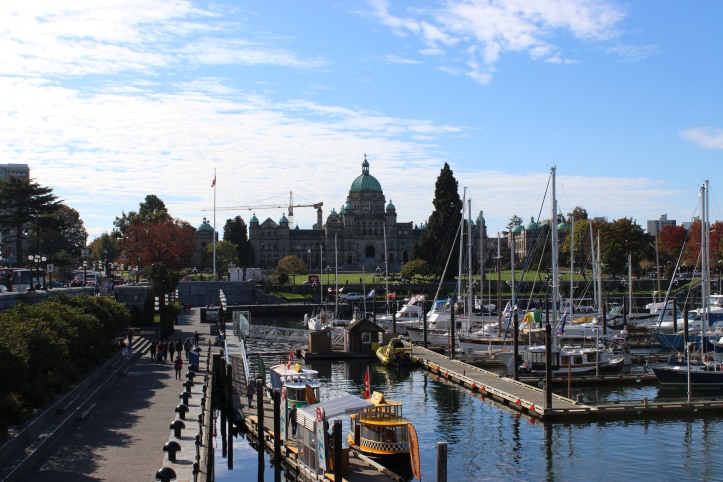 Victoria is the Capital of BC, but is actually below the 49th Parallel border with the USA.  The architecture in the city heralds back to its English influence as its settlement began in 1843.  Government and Johnston streets are home to the souvenir stores, the weird, the wacky and the niche.  Our favourite niche store was the “Old Irish Linen store” which we didn’t see anyone patron with their business.  Ready for a dose of retail therapy, Victoria was an amazing place to indulge.  It was like falling down the rabbit hole of back alleys, handcrafted jewellery, soaps, local creativity.  Fan Tan Alley was home to an Umbrellatorium.  That was a new one on me.  It seemed impossible to stay on route when there was something eye-catching and unique around every corner.  Victoria also celebrates its Orca population, both through the vast amount of whale watching companies, but also in its art.  These beautiful creatures are painted on to walls and pavements as well as celebrated in sculpture all around the city. 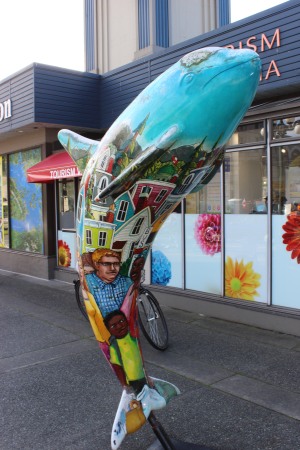 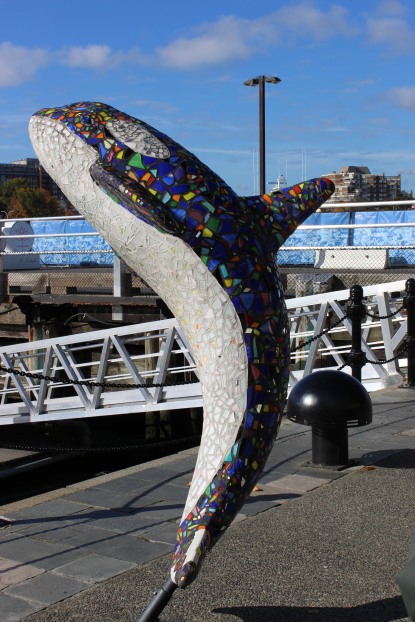 Victoria by night was even more stunning.  On the harbour front, the government building was illuminated by what looked like fairy lights marking out its exterior.  Next to it stands The Empress hotel, the reputation of its high tea precedes it and where inside crystal sculptures hang from the ceiling.  Famed for its ghostly dwellings, we decided to join a ghost tour to explore the town by night.  Although the guide did manage to get one jump out of us, his storytelling left a little to be desired and even the most avid believer bemused.

We were blessed with blue skies and enjoyed following the harbours edge to Fishermans Wharf.  The slowly winding waterfront path was decorated with colourful fallen leaves and we weren’t the only ones enjoying it.  A group of Canadian Geese had staked their claim to the view, along with a cluster of ducks and a cheeky river otter.  Fishermans Wharf is a dock filled with colourful floating residences, all quirky in their external decor and rather more upmarket than the floathouses and Chinese junks that were moored here in its hayday.  We tried to do cultural things, the government building offers tours but was closed to the public as a press conference was being held outside, so we tried out a different sort of culture, a beer garden port side.  I can highly reccomend. 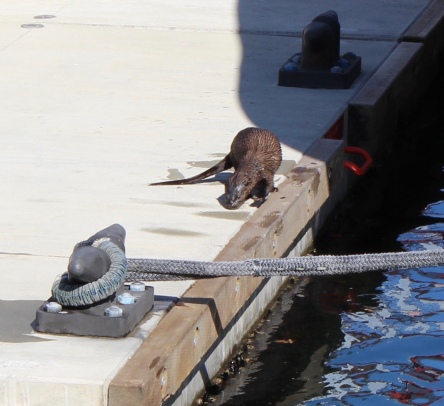 Getting around – Vancouver Island can be easily navigated by car, although its size may be deceptive.  Tofino bus also operates a regular bus service up and down the island.