On our second excursion into the Rockies we were welcomed into the castle-like Fairmont Banff Springs for a nose around.  We bought coffees in the lobby and tried to blend in with the rich and well to do as we explored the grand meeting rooms and hallways of the prestigious hotel.  Not to suggest that I have a reputation as a nerd but Joe and Jess gave me a pamphlet on the hotels history and dropped me off at the gallery to show me where it all started.  Just for the record it was 1888 during the construction of the railways from east to west.  Banff takes its name intact from Banffshire in Scotland, named as such by George Stephen, President of the Canadian Pacific Railways in 1884 after his hometown in Scotland. 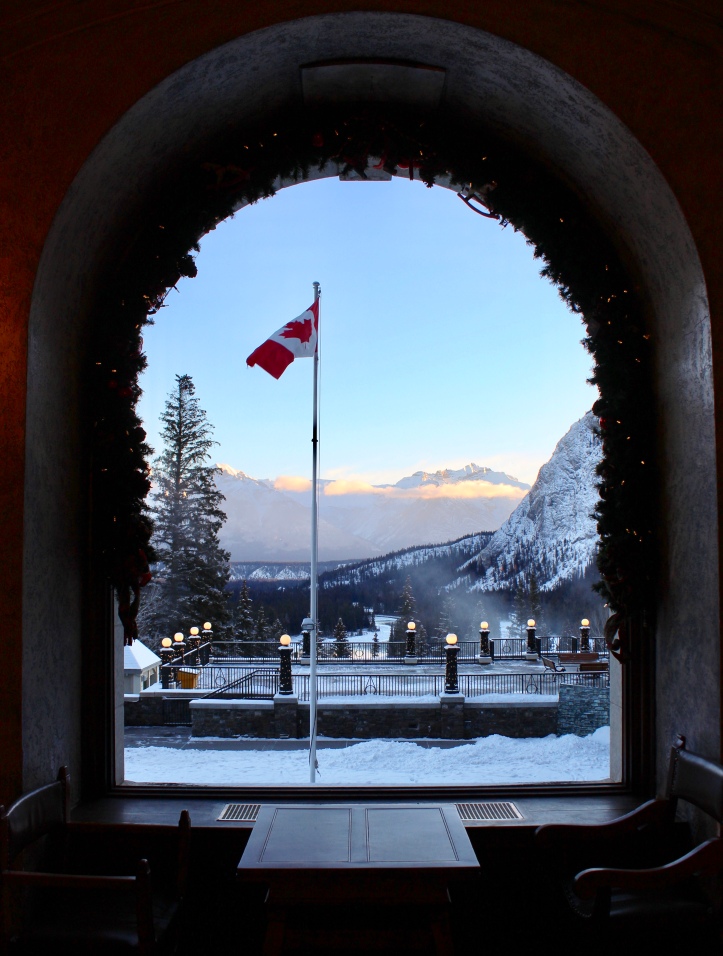 Sufficiently nerded up, we made our way to Banff’s ski hill, Sunshine, for the first ride of the season.  There was fresh snow and blue skies.  Our boards were freshly waxed, some with a little too much residue to run smoothly, and we were excited but a little bit nervous.  The gondola ride takes an elbow bend up into the mountain then kicks you off in Sunshine Village where we opted for the least intimidating lift to get ourselves underway.  Despite our nerves it came back pretty quickly and we were soon enthusiastic about lapping the new runs.  Jim, our new housemate, met us at the hill and we rode until last lift, testing those latent snowboard muscles.

In the evening, Banff was transformed into a Christmas parade as Santa visited the town, followed by floats from local businesses and clubs.  The festivities continued into the night as we met my friend Cat, a colleague in Iceland, and her boyfriend.

The next morning we were kicking it north with waining enthusiasm.  Back up the Highway 93 to Lake Louise and beyond as we ventured further, into the Icefields Parkway, destination Jasper.  The towering mountains continued to awe us.  Once again we visited Peyto Lake, the gem of the area.  We also stopped off to gawp at glaciers, namely the Athabasca glacier which twinkled in the afternoon sun, saluted the Saskatchewan River as it crossed Alberta heading home to its namesake and marvel at the Sunwapta falls which flooded icily through a steep canyon.  Our hostel was a converted ski lodge with big dorms and wooden throughout.  It was up Whistlers Road on Whistlers Hill, the original ski hill before Marmot Basin opened.  Heres a curious link.  Whistler (of Whistler Blackcomb) is named after the hoary marmot who makes a whistling sound, yet here in Jasper we have Marmot Basin, taking over as the local hill from Whistlers Hill. 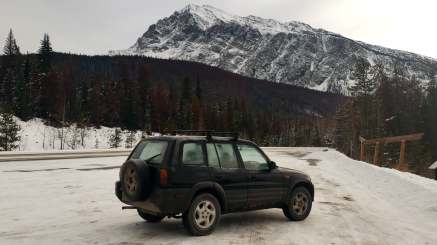 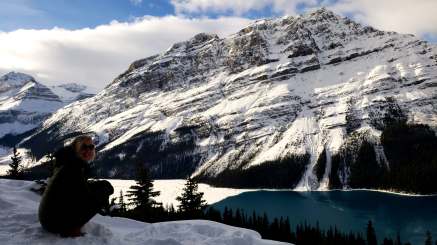 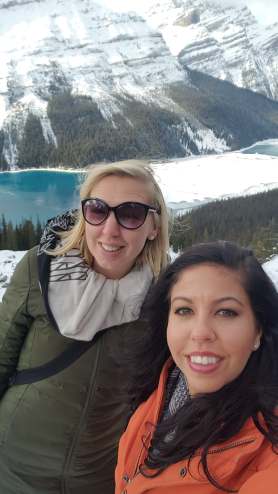 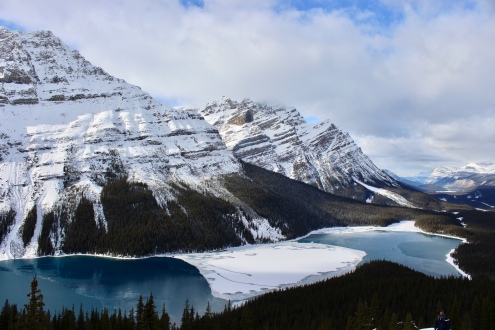 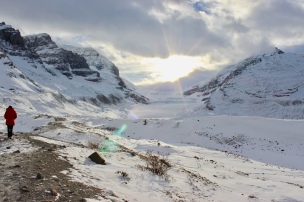 When we arrived at Marmot Basin promptly Monday morning there seemed to be about 5 other cars in the carpark.  An early season midweek day, on what revealed itself to be a lovely locals hill.  Its whole ski area was cut across diagonally by the longest chairlift in the resort which we lapped several times, avoiding the odd rock garden before venturing off on tangents which revealed new runs and deer grazing on the edge of the piste.  It was hard packed snow, but we felt like we had it to ourselves which was a rare treat.  Though the days were full, it was clear it was the start of the season as it became the second night we were in bed not long after 7pm. 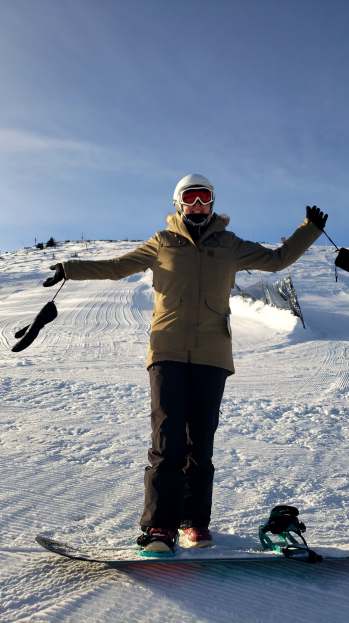 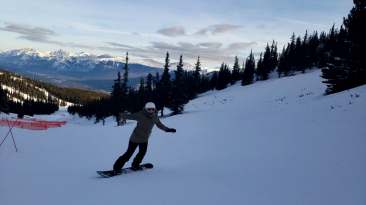 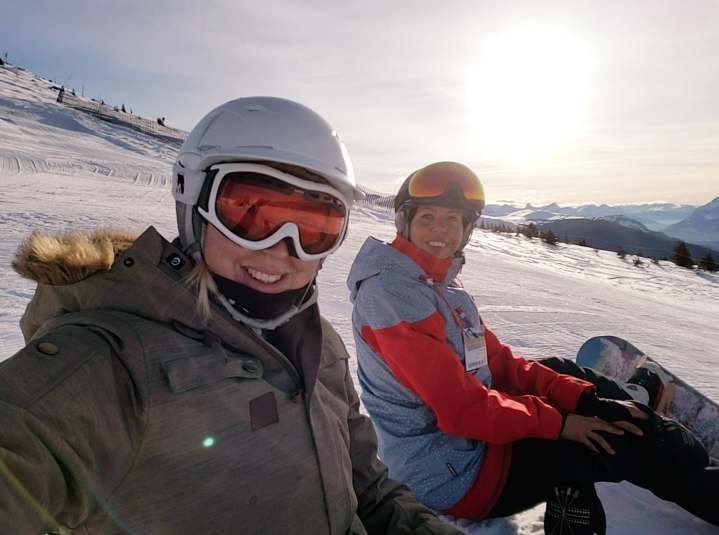 Jasper township is at the heart of Jasper National Park.  Another town born with the coming of the railways that now is home to adventure seekers and wildlife alike.  Our return journey back to Banff boasted more stops for us to see.  Horseshoe lake, frozen over and tucked in a snow-covered forest.  This time we sought out Athabasca falls, another deluge of glacial water on a mission and several other “wow we must stop” photo stops before we arrived back to Banff. 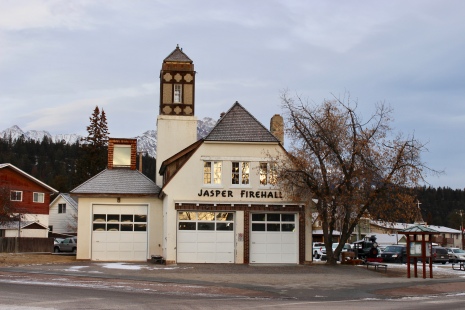 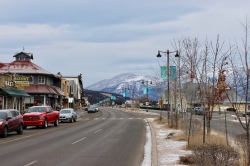 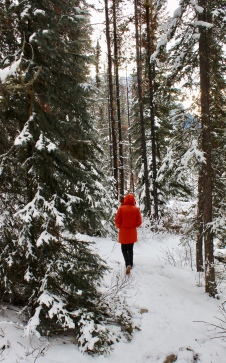 Day three of the snowboarding tour and it was back to Sunshine, this time with Joe who had us launching off side hits and navigating new terrain.  Mission Park Mouse was underway.

We persuaded Joe and Jess to take us back to the Fairmont for a second peek.  We explored the halls which hold the legend of the ghost bride who died on her wedding day, still to be seen occasionally dancing her first dance alone.

After over a year in Canada, I marked something off my Canadian bucket list, trying a beaver tail.  A fried pastry in the shape of the creatures tail, covered with sweet treats and goodies of your choice.  It didn’t disappoint. We used the rest of our final day in Banff to get christmassy, and all picked up the most outlandish, insulting and ugly Christmas jumpers we could find at a thrift shop.  We ended the day at the Banff Christmas Markets held at a stables on the outskirts of town, where Santa made his statement as a Canadian using an excess of red plaid.

Come Friday we had been a week on the road, we were excited to head home to our little spot in the Purcell Mountain range.  Nature had other ideas.  A shop in Radium, about half way home, had caught fire that morning and the road was closed for the day.  As we arrived at around 1.30pm we had a few hours of road closure ahead of us, but such is driving in Canada, the alternative was to drive seven hours in the other direction.  In Canada it seems no-one is just popping down the road and people accepted the news, parked up, threw snowballs, made new friends and idled along.  We decided to make an in car cinema with snacks and a movie.  Canadian style, eh?