The bright lights of Toronto

Back in Winnipeg, I Couchsurfed with Iris and we tackled Sunday morning head on with a bike ride through the leafy green streets of Winnipeg and out to Assiniboine Park.  We celebrated our energetic efforts with ice cream.  I learnt that Winnipeg is the slushy capital of North America.  Strange, that a town this cold for most of the year still consumed so many icy drinks.  My final day in the city ended with a stroll along the Assiniboine River, a pleasant experience despite the fact that the name Winnipeg translates into “Muddy Waters.”

Back on ‘the mainline’ the train seemed to span for miles as carriage after carriage were filled with people with many different stories.  Young people crossed on summer break whilst others used it to move homes.  Our onboard musician was a hippy from Ontario travelling home, playing folk, and leaving behind an interlude on Vancouver Island.  As the train was of course, notoriously late, there was a lot of time to trade stories and watch the tree lined tracks go by.  Ontario means beautiful waters and has 20% of the worlds fresh water in the form of 250,000 lakes.  The southern part of Ontario, the Greater Toronto Area, has 14 million of the country’s population.  Cottage culture is rife as people escape the most populous part of Canada for some serenity and cute cabins line the shores of the lake.  Toronto takes its name from a First Nations language meaning “where there are trees in the water.”

Union station is in the heart of downtown Toronto and emerging from the station I was instantly struck with the bright lights, big city feel of the shining metropolis.  On this warm evening the bars spilled into the streets whilst well dressed business people celebrated the end of their working day.  A large area of prime real estate lay in memorial to the train yard which would have once made up much of the downtown, demonstrating its economic pull.  Now the historic carriages are surrounded by some of the highest rent condos in the country.  With pet owners living city centre in apartment buildings, the dog culture spills out into the streets and there is an iconic dog fountain in a small park on Front Street, with 27 dogs (and 1 cat) eyeing up a bone. 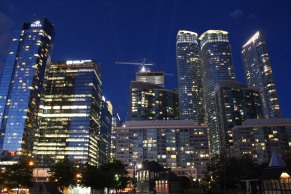 The next day I toured the waterfront with a guide and several locals, out to learn more about their city.  The water would have once enabled the industrial economy of the city, but is now home to kayakers and yacht owners, skateboarders and inner city beach goers.  Factories have been turned into art galleries and beneath your feet, tunnels take the place of outdoor commuting underground for a winter alternative. 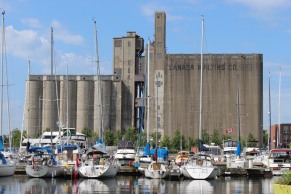 I had a very important catch up lunch date with Aryssah, a friend I hat met 7 years before whilst travelling in Europe.  She welcomed me to her downtown condo with a Caesar to drink, a Vodka and Clamato juice combination, because she is truly Canadian and a classy lady. Over lunch we caught up on seven years of life stories, before she went back to being an important Toronto business lady, and I set about to stroll on in the heat of the day. 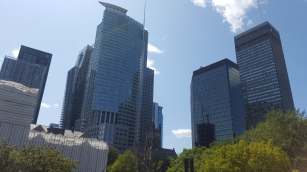 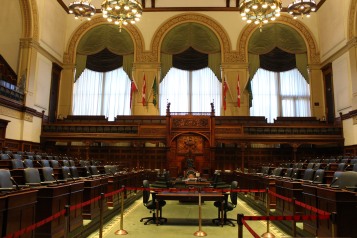 I stumbled across the Ontario Legislative building.  It is set in Queens Park and looks down the promenade of importance that is University Avenue.  Built from Ontario Sandstone, it has an imposing structure and beautiful interior.  Ontario houses most of Canada’s population and its biggest city.  As such a small area of 6km downtown Toronto holds around as many people as much of the northern part of the province.

I was staying for one night of luxury on the 18th floor of a hotel overlooking Yonge-Dundas square.  Life lived at height is common here.  However, unused to the space of my own room, come evening I headed back to the hostel to join the Trivia night, and won the pub quiz.  With my prize as a pitcher of beer, it was a good excuse to hang around and make a few new friendships before the night, and my stay in Toronto, was up.