My last train journey on the west to east adventure pulled up mid afternoon at Moncton train station.  I was onboard ‘the Ocean’ bound for Halifax, Nova Scotia and I was being eagerly awaited by mum who had flown out just a few hours before.  The train station was on the waterfront of this port city and I navigated the local buses to meet mum and begin a week of celebrating our birthdays, daily, together.

Nova Scotia is latin for New Scotland and clings heavily to its Celtic heritage, right down to its blue and white provincial flag.  They are also famously helpful and friendly in the Maritimes.  We set out in the warmth of the early morning for the Citadel.  It overlooks the harbour which is so important to the city and its history, however it is getting increasingly separated from the water by modern high rises.  The changing of the guard is performed daily at 10am.  The guards proudly wear their tartan outfits. 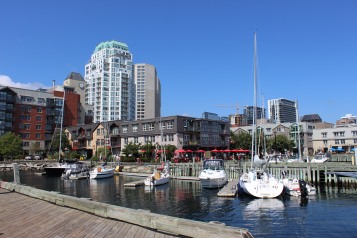 Halifax appears to have had some pretty huge moments in history, that you just don’t hear about until you get here.  Upon Churchill’s visit in 1943 he famously said “now we know that Halifax isn’t just a shed at the end of a wharf” suggesting that beyond its port, little was known about this city.  Devastatingly, Halifax was home to the largest non nuclear explosion ever, and yet even other Canadians don’t appear to be aware of this.  On 6th December 1917 at 9.04am, the Mont Blanc, carrying heavy explosives bound for Europe, exploded sending shrapnel flying so far it was being recovered up to 20kms away.  Windows shattered up to 50 miles away. The shockwave was felt 270miles away. 1600 people were killed instantly, many more from exposure, exacerbated by a huge snowstorm the day after the explosion.   It was caused by a collision of the Imo and Mont Blanc boats in the Narrows, the waters separating Halifax and Dartmouth.  A fire broke out after the side on collision that pulled a confused crowd.  Fireworks soon led to a huge explosion which deafened the city and reduced it to rubble.

Halifax also lays claim to being a big part of another huge world event in 1912, the aftermath of the Titanic.  As the closest major port many of the ships departed from there, however whilst survivors were mostly taken to New York, Halifax collected and buried the dead.  Whilst no acknowledgement was given to the city in the movie, parts of the film were intact filmed there. There is even a grave for J.Dawson. A fascination with this tragedy lives on with the important role immigration at this time had on the growing communities of Canada and the US.

Halifax as a naval city, also experienced huge VE Day riots.  The navy and soldiers were unpopular with the locals throughout the city.  On the day the end of WW2 was announced, in an attempt to curtail excitement, no pubs or shops were open.  9,000 jubilant soldiers came to land to find that nothing was going on and proceeded to loot, causing a riot to break out which lasted into the night.  When another 9,000 troops were allowed on land the next day, a fresh batch of looting took place, putting Halifax on the map as the only place in Canada to ‘celebrate’ in such a dramatic way.

Halifax is still most beautiful down by the water, its vital lifeline.  On a hot day, we spent the afternoon exploring and pausing for refreshments at each beautiful turning point. Pier 21, now a museum of Immigration, has welcomed so many settlers to Canada that it claims to be the touching down point for descendants of 1/5th of the Canadian population.  We crossed the water to Dartmouth which provided an amazing view back at the city, but also was the point the freight trains chugged through with their many, many cargo containers.  By night, the maritime museum had a group of musicians performing Celtic music.  Under a pinkish sky, it was a beautiful display of sound and colour from this Maritime city. 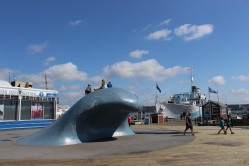 We picked up a car to begin our roadtrip adventures and headed towards Peggys cove.  The scenery quickly transformed into its glacially affected outlook.  The road wound along the coast and huge round boulders became the prominent feature.  By the time we got to Peggy’s Cove, colourful houses appeared by be balanced haphazardly on each outcrop, facing in every direction.  Lobster nets and fishing boats were artistically strewn.  We visited the many craft stores and enjoyed a coffee on the deck of a scenic cafe before wandering on to watch the ocean crash against the rocks.

Following the coastline out of the town again we retraced our steps to Bedford where we called in for a special afternoon tea at the Tartan Tea House.  The wallpaper was bold in its Scottish print.  The tea sets were quaint and the menu set to follow regal high tea traditions.