We left St Petersburg in style on the Red Arrow. In Russia the lower the train number the better the train, we were on number one. Unfortunately we got on at midnight and off again at 8am so had little time to appreciate it! 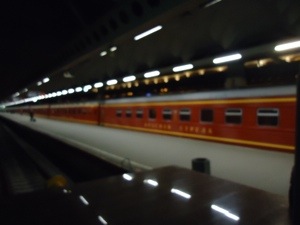 We checked in to our hostel and went to find a walking tour where we met all our fellow travellers from the last hostel.

Moscow has a little more history confronting it's more recent past. From most places in Moscow you can see one of Stalin's "seven sisters." These are skyscrapers which were built to commemorate the 800 years of Moscow, so it was originally intended there would be 8, but building of the eighth was cancelled when Stalin died. Each has a communist star at the top.

We arrived at Red Square, so called because red in old Russian means beautiful. St Basil's cathedral and the Kremlin dominate this space as well as a beautiful shopping mall. The buildings in Red Square have a spire on top. These are either headed with a communist star or have been returned to the original symbol of the city, a two headed eagle. 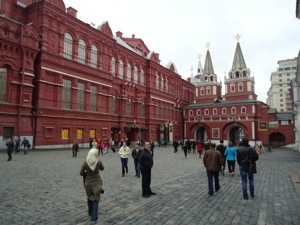 On the other side of Red square is this statue, which shows communism squashing the swastica. The man on the horse took Stalin's place in the victory parade because Stalin couldn't ride a horse. Russians are very proud of their victory in WW2 which they call the great patriotic war and cite its dates as 1941-1945. This is because this is when the Nazi's entered Russia. 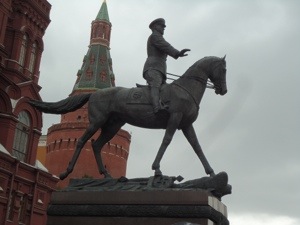 From here we went to watch the changing of the guard at the Tomb of the Unknown Soldier which happens every hour from 8am-8pm. 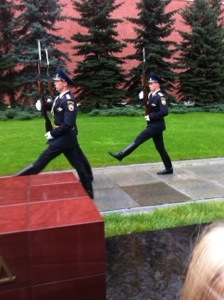 After the tour Ricky, Tara and I went into the Kremlin which is the political centre of the city where the state palace is, Putin's office and many churches. There is 5 churches remaining in the Kremlin where there used to be 30. During Stalin's reign the city lost 80% of its churches.

The Kremlin also housed the Tsars 40 tonne cannon, never fired and the Tsar’s bell which cracked before it ever rang!

After lunch we went to St Basil's cathedral which was built to celebrate Ivan the Terrible's capture of Kazan (now a Russian province) in the 16th century. Inside was not a grand church but 9 seperate chapels each commemorating a different saint. In the central bell tower there was an opera group singing and the acoustics echoed all the way up the tower making them sound like a full orchestra. It was pretty goose-bumpy! 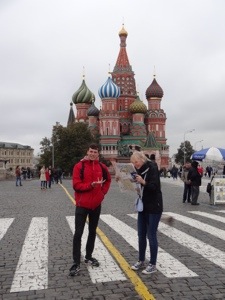 After a rest we met our travelling friends in a bar for a few drinks. We are all doing the Trans-Mongolian route but on slightly different days, hoping to catch up on the other side!

Not great weather in Moscow!

We went to see Lenin’s Mausoleum, yep Lenin’s dead embalmed body! It is inside red square and there is graves of other political leaders including Stalin, then you enter Lenin’s tomb and he is in the centre, illuminated but in great condition for a guy who had been dead 70 years. He is cleaned and re embalmed every 6 months, now wouldn’t you love that job!

In Russia you are overrun with brides everywhere you go. A lot of couples get married on the Friday and celebrate all weekend. Because of this we were sitting in the mall on red square and counted at least 14 couples having photos. They tour the main sites to have there wedding photos but this means you literally cannot move for brides. There is a fountain in the centre of the mall which at one point had 3 newlyweds all having photos simultaneously!

We went to a Ukranian restaurant for lunch, Tara’s Bulba. Russians and Ukranians share a lot of cuisine and we had an assortment of meats to start, served cold then I had veal in egg batter and Ricky had cabbage rolls which contain meat. Other traditional foods include soup and dumplings.

Soaking wet we stumbled upon a beautiful church, the church of Christ the Saviour. It was 5pm and they seemed to be having a ceremony with lots of singing at spreading of incense. The Russians are very superstitious and you can see this in there orthodox religion as they kiss saints and relics. 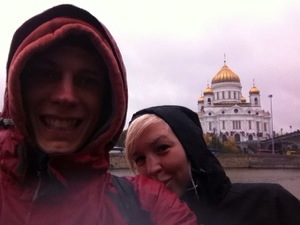 Next up, the first leg of the Trans-Mongolian train to Irkutsk which is 4 days!