So we boarded the first leg of the Trans-Mongolian at 13:00 on the 22nd September.

In the afternoon a lady came around to take our food order. We found it highly amusing that she had little English and had to act out Chicken and Fish, and finally Moo, impersonating a cow!

Lunch was borsch, a Russian soup, a meat course, a bottle of water, a hot drink and a chocolate bar. 1st time round it was yummy!

We were joined in the evening by a Russian lady who had little English.

Very early in the morning the Russian lady left and a young mum and her little girl got on. They also had very little English but we found it easy to communicate using paper aeroplanes, dance moves and lots of fun games.

When the chicken, fish, moo option came round again we were slightly amused and again it was quite tasty.

Later in the afternoon we made friends with the American couple next door, Jack and Christie. In the restaurant cart we had a few beers and some card games to while away the hours. We went forward two time zones. 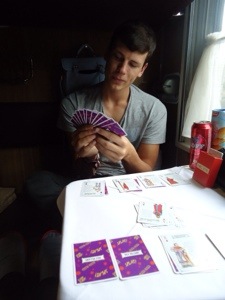 Ricky and I went to find the third class carriage of the train. It was along way back and when we got there the attendant wasn’t very happy that we had come to observe. It was about 50 beds in a small space with no privacy. Very sociable! All you can see is feet poking out of white sheets, much like a morgue!
In the words of Karl Pilkington “I don’t even send my post third class!”

Chicken, fish, moo? This question is now no longer funny or easy to stomach!

The little girl was chasing Ricky up and down the carriage not letting him go to the toilet, she is very cute. Every time we ask her age she tells us something different!

We went forward another time zone making us +3 from Moscow, +6 from home.

In the afternoon we went to the Restaurant cart with the American couple to play more cards. We got out the small change we had from euros, roubles and American dollars to use them in Poker.

We have now crossed the border into Asia!

In the evening we ended up playing some kind of Russian Charades with the little girl, Yana. Using the Russian app on our iPad we would play a Russian word and she would act it out. We also played telephones across the carriage. She has picked up “one, two, three” from us and finds it very funny to repeat it over and over!

We have gone forward another hour overnight meaning we sleep in until about midday. It has been very mild at our stops and sun floods the train during the day. 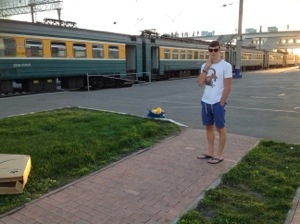 The landscape has changed to being hilly and from the train we see lots of wooden houses which look more like sheds, all growing their own veg. It is a wonder how they survive the Russian winter in them! 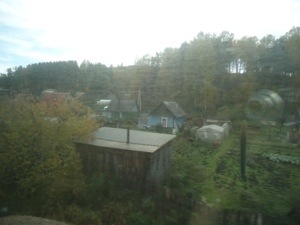 We have some interesting groups in our carriage. There is quite a large group of Australians, a man from Hawaii who has been to 150 countries, the Americans next door and a few Russians. The train route sees quite a lot of tourists going west to east, but mostly Russians returning the other way apparently.

At the stops lots of Russian women gather around to sell you various random items, radishes, smoked fish, blankets. At one stop there was little stalls set up with dumplings, and other delicacies.

We departed our little home on the train, 9:48, 26th September after crossing 1/6th of the worlds land mass. In need of a shower!