How do you write about 2+ weeks of beaching in the south of Thailand?

Ricky and I arrived in Krabi, a beautiful town, despite the unfortunate name, on the coast. We spent one day at Railay beach which you could only access by boat. This beach had crystal clear waters and lots of longboats serving food which kept the beach looking lovely and natural whilst being very convenient. I got very sunburnt. 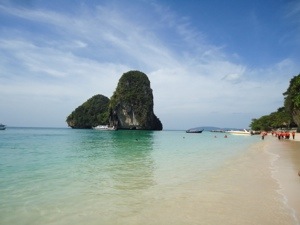 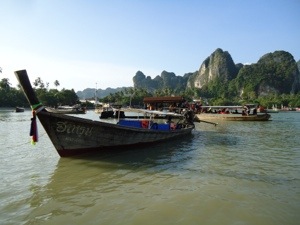 We spent the second day in Ao Nang, a beach to the other side of Krabi. The beach sellers now included a man carrying two barbecues on a shoulder mount which is some feat in 30+ degrees heat.

But finally the day arrived to meet the arrivals. Ricky and I got the mini bus to Phuket, an eleven seater mini bus filled to capacity and beyond with 16 passengers. In the evening we took our place armed with drink and snacks, roadside at the hotel waiting for David, my brother to arrive to be reunited after 9 months!

On the next day come evening we were there again awaiting the arrival of Bex and mum on their mammoth multi change journey. Finally reunited we took them to the market to sit on plastic chairs in the street and enjoy the local cuisine.

We stayed in Patong, a 'lively' town on Phuket. Bangla road was an interesting welcome for the others to be unrelentingly offered a wide array of ping pong shows, sexy ladies and massages. Despite this, the island is mountainous and the natural habitat is beautiful and green.

Each day followed the routine iced coffees from the street vendors before pointing blindly at a map and parking ourselves on that beach, and who can complain. We did lots of swimming, snorkelling and sunbathing. In the evening we headed to the market and tried a different delicacy. There was lots of barbequed meats, wok dishes and dumplings as well as crepes, coconut ice cream and corn. The evenings were warm and we sat roadside and fed for under £2 each. 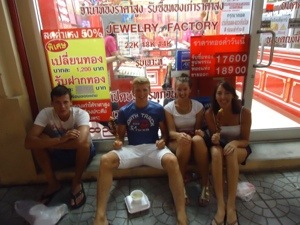 Christmas Eve we headed to Starbucks for our dose of Christmassy music and festive coffees. The build up to Christmas was simple and Christmas Day we hired mopeds and headed for the beach. Christmas lunch was replaced by Piña Coladas and Christmas dinner was a beautiful evening meal in a restaurant. Bex kept it real and had a pizza and Ricky, David and I took the opportunity to have a steak which was amazing. After dinner we called relatives at home whilst eating a Christmas cake smuggled in from home, streamed the queens speech and swapped a few cards. Actually it was very understated but special. 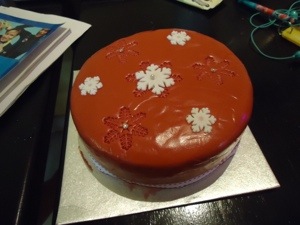 Boxing Day was day 1 of our three day PADI course to be qualified open water divers. We had been doing our homework on the beach the previous few days so were armed with theory and ready to go!

The course was so much harder than I had expected but exhilarating at the same time. The first day we were in the swimming pool learning skills we would need. Our guide, Line (pronounced Lena) would tell us we were going to take our air source out underwater or remove our mask, and once we had accomplished it it felt amazing. By the end of the day we had 35 new skills under our belt, nevertheless we went to bed nervous for our first dive the next day.

On day 2 we did our theory exam and all passed, then headed to Kata beach to gear up for our first real dive. Nothing makes you feel less streamlined than wearing a wetsuit and flippers combined with a weight belt, BCD and air tank, but underwater that's exactly what we were! It took me a few minutes to prepare to go under but once down we went to 6 metres and swam around a coral under the sea. The schools of fish you see are incredible and one of the instructors pointed out a cuttlefish!

We returned to the beach to change tanks and were straight back in the water performing some of the skills we had learned the day before and responding to out of air situations. That evening we were exhausted but felt so accomplished!

Our final day of PADI we headed back to Kata beach to complete two more dives. We went down as far as 9 metres and circled the coral discovering lion fish and lots of colourful aquatic life. We had more skills to perform to achieve our qualifications, all of which were difficult but once we surfaced we felt invincible. Fully qualified PADI open water divers!

On our penultimate day all together we took a day trip to Phi Phi island. Our crossing was 1 hour by speedboat and it was choppy meaning a bumpy ride. Our first stop was at Phi Phi don island and the boat stopped amongst the coral so we could get out and snorkel. It was incredible! As soon as you put your head below the water bold colourful fish were staring you in the face. We saw many of our finding nemo favourites including Dory and Gil. The coral was colourful and alive with hundreds of sea urchins lurking. We had lunch on the island and a short walk along the beach before we boarded the boat for Phi Phi Ley island. We passed through the beautiful emerald waters into Maya Bay, the beach where the film 'the beach' is filmed. Despite theirs being full of boats it is incredibly beautiful little cove encompassed by limestone hills. 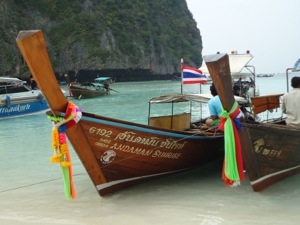 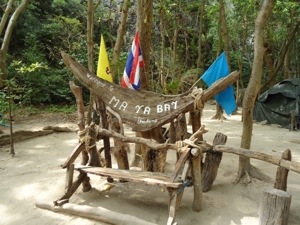 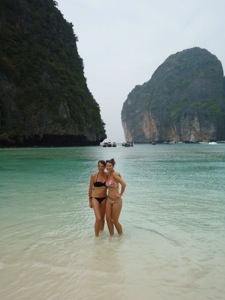 Our final stop of the day was at Khai Island and we snorkelled from the beach. The water here was much shallower meaning very close to the lurking sea urchins, but the fish were still as fascinating. Some were iridescent whilst others completely see through and it’s a strange thing to hear the noises they make! 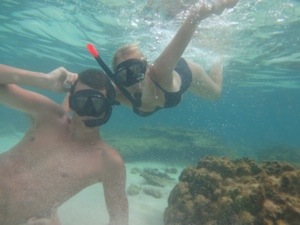 New Year’s Eve was our last day altogether and mum and Bex were keen to catch their final rays. We parted in the evening and were very sad to see them go!

David, Ricky and I moved to our new hostel. For the New Years celebrations we bought some drinks in and had a lovely meal next door to the hostel in what was essentially a family’s front porch! At about 10:30 we sat outside the hostel with the staff who were having a New Years feast and invited us to share with them. They were so friendly and one lady particularly took a shine to David who she kept calling handsome. We spent New Years on the beach where the sky was littered with lanterns and there was lots of fireworks come midnight.

Our first of January was spent feeling less than fresh and doing very little. The boys went next door for takeaway and received some attention from a group of lady boys which was about as eventful as the day got. We left in the afternoon for our night bus to Bangkok and David’s admirer was sad to see us go.

So we never quite managed to get rid of one family member. David will be joining us for the next few months- how did I land up with two boys? Here’s a few words from Bex….

So, this week I have the mighty privilege to write Bex’s Corner. The pressure is on… Where to begin with such an amazing place, Thailand is definitely a good introduction to Asia, for a novice like me! The food is amazing, cooked right before you with every strange utensil possible- I like to think of it as not fast food, but just good food quick… Every night we walked no more than fifty metres to the local food market and tried all sorts of goodies, of course my personal favourite: the Nutella crepe!! My favourite thing about this place is everyday is a beach day, which is a strange thought for an English person… The best beach, we named Christmas beach, the snorkelling was perfection- if you could handle sharp rocks and the possibility of seeing speedos at every turn! And this is where the delight of diving came in…speedo free! With our buddy Linus, a swede who joined us on our course, and our beautiful instructor Line, we managed to dive four times, encountering a very moody puffa fish and meeting the whole cast of finding nemo! Having David as my buddy was a privilege, and I can say that after nine months not seeing this boy, nothing has changed… Without getting too emotional, Thailand has been a highlight of my life; whizzing around the small hilly roads on the back of David’s moped, encountering an elephant traffic jam but mostly spending a couple of weeks with two people I miss and love…and of course Ricky! Goodbye for now Asia.