On the hippy trail- Chiang Mai and Pai

After a night bus we arrived in Bangkok at 6am. It was a catalogue of disasters from the bus station, getting on a local bus then needing to get a taxi which tried kidnapping us. Bangkok is certainly not my favourite place and after arriving with an open mind, it quickly fills you with unease.

We paid to use a shower and common room at a hostel and exhausted by the heat and the journey, spent most of the day vegged out watching the beach (for comparison with Maya Bay) and other films. We did however head for a short explore showing David the sights of Khoa San Road and stopping in a park along the river for a sunbathe. On the way back to the hostel we walked past the grand palace and temples and a grander part of town. In Thailand they have a constitutional monarchy so the king is a figurehead, however he is greatly respected around the country and is pictures surround you particularly in Bangkok. The king resides at the Grand Palace. We also encountered the ongoing protests in Bangkok again. The crowd who were camped out around the democracy monument seemed to have shrunk since the last time we were in Bangkok however there is still a large group of people continuing in their hopes to topple the government. This disrupts a few of the roads in Central Bangkok but is very peaceful towards passers by, we were even offered free water.

We arrived in Chiang Mai on night bus and walked to the old city walls. Immediately the place had a nice feel to it, a relaxed vibe. Once we found the guesthouse we had booked our room had been sold, but having got a feel for the little “soi’s” and alleys of the old city we quickly found a nice place to stay surrounded by a local market. The centre of the city is set within old city walls, largely pedestrianised and we set out to explore our surroundings. Chiang Mai has a large concentration of temples and we walked to Wat Phra Singh which had a large reclining Buddha and fibreglass replicas of monks who had lived and worked there- freakishly real! At the front of the temple was a lady with small birds in a tiny cage, she wanted us to pay to realise them. This money making manoeuvre is a new one on us!

We had a simple local lunch and walked the streets. We found a bakery serving hot cakes out of there back door which was a treat.

In the evening we walked to the night bazaar, a huge night market selling food, the usual souvenirs as well as clever inventions which were new on us, one in particular was a portable sewing machine, the size and shape of a stapler. We snapped it up and considered buying more to sell on! There was a great vibe of music, bartering and even performing dogs!

We got up bright and early for our adrenaline filled day out- Quad biking and white water rafting. We were taken an hour and half out of the city to the mountainous green countryside. We were doing the quad biking first and acquainted ourselves with our bikes. On the bikes we travelled 35km, first through villages on quiet roads and then on a trail through jungle. 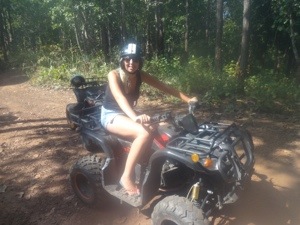 After lunch we took a bumpy Tuk Tuk to 10km up the river from camp to start the rafting. After a quick orientation we jumped in the boats. Joining us was a girl from Zimbabwe and our skipper who were both good fun. Despite the freezing water, Carmen kept asking the skipper if he would flip us.

The first part of the river was calmer, but a few km in we were cascading over rocks, backwards, sideways, anyways. As the river got calmer our skipper called us all "over left." Despite being confused we obeyed, the boat flipped and we were all soaked but laughing none the less. From then on he took every opportunity to try and push us in, and we succeeded in turning him overboard!

For the last 2km I took over skipper duties. I was awful at it, but kept up the team morale I think!

Back in the city we went to a local restaurant with an American guy from our dorm to eat and swap stories before heading out to find the Saturday walking street where markets and festivities take over each Saturday. This was a more local version of the night bazaar and emitted the friendly northern vibe!

We got picked up early for our transfer to Pai. The journey was 3 hours but wound up the mountains taking in, as we were told later, 762 curves. It was quite a seasickness inducing ride but as soon as we arrived we fell in love with the place! It was a gorgeous little relaxed town with tourist amenities without being pushy.

Our hostel, Spicy Pai, was a 10 minute walk down a country lane giving us a scenic walk. It was a group of wooden huts in the middle of a rice field with an amazing view.

We rented mopeds and were just about to set off when we joined another group from the hostel. Jack, who had been staying in Pai a long time took us on a beautiful drive. Our first stop was a waterfall with three tiers. The water had carved slides into the rock bed which David and Ricky slid down. You could tell by their landings the water was freezing. A bold Thai child was launching himself from about 30feet into the landing pool below and causing a great stir with the spectators. 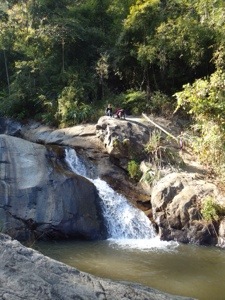 Next up we went to a drink stop and viewpoint. The open air cafe looked over the valleys of Pai, the outlook like the steep inclines of the Peak District or the valleys of wales, with a little more heat! Our biking group consisted of two Aussie girls, a swede, an American, Jack and us and our hells angels formation continued on to Pai Canyon. The canyon was fairly small but dusty banks dropped away into steep inclines. It was stunning and fun to clamber around.

On the way back Ricky and I ran out of petrol as our petrol gauge was broken. We were pushing the bike up hills and rolling down them, passing elephant enclosures on each side before David came to our rescue!

That evening we headed into town with a nice group from our hostel to sample the foodie delights of walking street. The range was amazing, from bruschetta to Indian, pancakes to fried insects. I think the street food is still my favourite thing about Thailand! In the north of Thailand, particularly Pai, the temperature drops quickly once the sun goes down so by late evening we found a bar and huddled over a few beers swapping our stories.

In the morning we moved from our hostel which was full, to a guesthouse in town, although it was more like a private cottage with our own little garden.

After managing to run out of fuel (again, this time a broken petrol pump) we met our 'spicy' friends at the local hot spring. The hot spring consisted of several pools in which the water filtered down. The water emerged from the ground at 80-100 degrees and you could boil an egg in the water. As it filtered down to the bathing pools it cooled to six pools ranging from 38-32 degrees. We hopped in at 37 degrees and cooked ourselves before opting for a long bathe in 32 degrees. 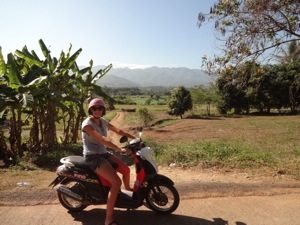 We biked back to the town to freshen up and in the evening met our friends again to watch sunset from the Big Buddha. The view from this mountainside spot was like looking out over the opening sequence to the hobbit, so unspoilt!

In the evening we gorged ourselves once more at the walking street before heading across the river to a Reggae bar where we sat around our own private fire pit. Despite the various amazing journeys everyone was on we opted for a more trivial topic, jokes, more accurately Christmas cracker jokes! Ricky even pulled out this old school one, why was six afraid of seven? Because seven, eight, nine!

For one last time we hopped on the mopeds and met the group at spicy hostel for a trip. Jack led the group to a farmers land which had eroded to cause a land split. As this had effected his ability to mass farm he used the produce to serve to visitors on a donation policy. He served us a sweet juice made from Roselle berries, and a same mixture but turned into a sweet wine. He also gave us papaya, tamarind, banana crisps with jam, peanuts and sweet potato. After feeding we went to visit his land which was slowly eroding down the hillside! 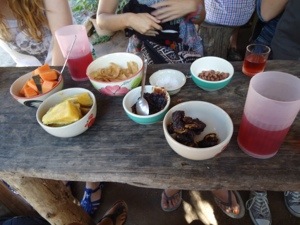 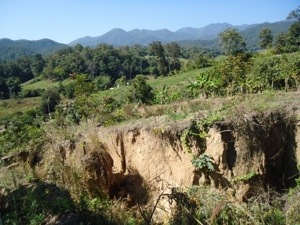 Next we rode to a beautiful, secluded waterfall which again was freezing. Wading through the water made your feet numb, but a few of the group braved it and jumped in!

For lunch we stopped at a hidden cafe and I met one of the most eccentric travellers of the trip so far. He was a Korean man who went by the name Jin, or suspicious J. Everything about him was flamboyant and he told us of his days of forced conscription into the Korean army and his time in the Jailhouse. You had to laugh!

In the afternoon we drove half an hour outside town to another hot spring, this time well hidden in the forest. The track we took to get to it explained why it was so hidden, almost vertical in its hill and valleys, a scary drive. When we arrived it was a pool in the middle of a forest, the water 32 degrees and clear, quite surreal.

On our final day in Pai we returned our bikes and explored the town and local area. The town is full of beautiful cafés and hippy hideaways. We browsed the shops and had a coffee and cake in a little cafe which had artificial grass as a table top and flower covered sofas.

The north of Thailand has been such a treat. I couldn’t help feeling Thailand was a beautiful country set to self destruct, selling its self out too cheaply. It’s nice to see the quaint countryside and the people who still embrace tourism whilst staying true to their smiling Thai image.

Next stop, Luang Prabang in Laos!