On the mighty Mekong- Luang Prabang, Vang Vieng and Vientiane

Our journey to Luang Prabang was long. We took a mini bus to the border where we slept for all of four hours, then did border crossing formalities in the morning. By 11am we were at the bus stop Laos side but our night bus wasn’t due to leave until 6pm. Nonetheless it was a good day. We set up a makeshift cricket pitch with two bats and became the centre of attention for a while as the boys hit 6’s across the car park, then we hi jacked the stations tv and played TV shows through David’s hard drive. The sleeper bus wasn’t so much a sleeper as a coach, and despite only having 50 seats, there were at least 55 passengers resulting in extra aisle seats- only in Asia!

We arrived and got our bearings. Laos is country number 11 of the trip and uses Laotian Kip, £1 is 12,000 kip. It is a former French colony which quickly becomes apparent due to how many baguettes there are! The town was pretty, it used to be the capital until the 16th century. It had lots of monks walking the streets, dark timbered buildings and it overlooks the Mekong river. We had a baguette for lunch before climbing the 320 steps to Phousi Hill. There was a view of Luang Prabang, nestled in a bend on the Mekong which was stunning and dwarfed the town. 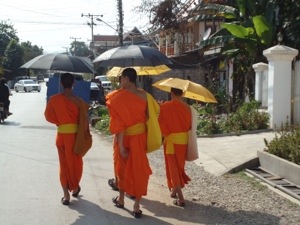 We spent the afternoon taking a very relaxed approached to exploring this laid back town, sampling beer lao and walking along the river. As we passed a primary school it was nearly hometime and all the children were singing as the flag was lowered to signal the end of the day. In the evening we took a walk through the more suburban part of town and stumbled upon a locals badminton tournament which was entertaining to watch. That evening it wasn’t very long before we fell into our beds after our two interrupted nights sleep.

We got up and took an early morning jog where early morning markets were taking place. Back at the hostel we got a quick breakfast and were out ready for our action packed day. We rented mountain bikes intending to bike the 30km to Kuang Si waterfall. The route was very undulating but so worthwhile as we weaved through mountainous scenery and small villages with “Sabidee’s” (hello’s) following us down the road. Children lined up to give us high 5’s as we passed.

After about 1 hr 50 we reached the waterfall area. We bought our tickets and first went to the free the bears sanctuary just inside the complex. It was an amazing project to free sunbears and Asian bears from captivity and labour and rehabilitate them. Their pen was filled with hoops, climbing poles and hammocks for them to play and while away the day. 12:30 was feeding time and the sanctuary allowed a few visitors in to hide food around the complex to make it into a foraging exercise. There was also a man smearing vegemite on several surfaces as an added treat. The bears devoured the bananas skin and all and were great fun to watch with their lionlike manes, hippo like physique and cat like agility. 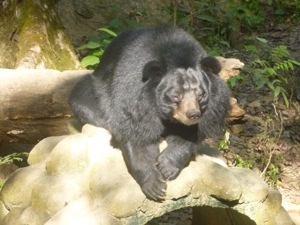 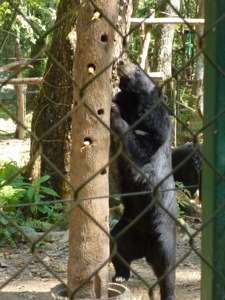 We walked further up to the lowest level of the waterfall which was turquoise blue and so beautiful. The next level up had a rope swing from a tree and the boys went straight for it launching themselves in. I eased myself into the icy cold pool before swinging from the rope and plunging straight down.

At the next level up we swam across the pool to where the waterfall was crashing over the rocks and tried to resist its mighty force. It was breathtaking- in both senses of the word! At the very top level the water crashed down the mountain. There was a scramble path up the banks of the fall up which we climbed maybe 40 metres? A long way to the top of the cascading. You could also see for miles around the beautiful surroundings. 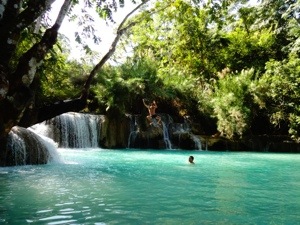 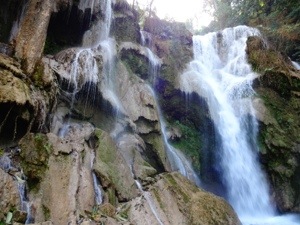 On the way back to our bikes we stopped to make toys for the bears at their enclosure. Using bamboo tubes we filed it with a few seeds and some honey before stuffing the top with branches. The bears are able to split open the bamboo and get the treats inside.

The return 30km was a slightly easier ride. As we passed through one of the villages there was an open air wedding going on and the guests were all dancing and celebrating.

The morning bus to Vang Vieng took 6 hours on a rode which wound through the mountains. When we arrived the town didn’t seem very special but it’s outlook was stunning. It sits in the Namkong Valley on the Mekong with huge limestone mountains penning it in. The town had a big backpacker scene a few years ago but since a lot of it’s partying has been quashed it is back to being a quiet town. The restaurants are all the same, you sit on little raised platforms, crossed legged around a low table and they show endless reruns of Friends, Family guy or other American shows.. It’s almost like having a TV dinner at home! You get a banana free with every meal or portion of street food, a lovely extra!

That evening we went to a sunset bar on the waterfront which had hammocks and platforms overlooking the river as well as volleyball and boules. When it cooled after dark they lit a fire which was a treat. 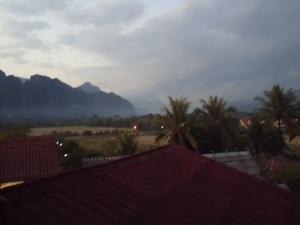 With our new friend Martina we rented bikes to explore the surrounding area of Vang Vieng where the hills are brimming with caves to be discovered. The road quickly turned into a rocky track making it a difficult cycle. After a few km we veered off the main route to the first cave Kap Kamn. Well hidden down a difficult path this cave receives maybe 20 people a day so the ticket collector was keen to show us around. It was a dramatically formed cave which you could go deep into. It held a big Buddha and several hollow stalactites and stalactites which sounded various different notes when hit with a rock. As the cave got very narrow we returned to the light and rode back to the main track to find more.

The second cave, Thap Kham was inside farmland. A long but beautiful walk took us to the entrance but the cave was a very thin descent down to a pool formed in the middle of the cave. Despite the signs recommending a swim we resisted. This cave had a second loop which we took. At about the furthest point from the entrance, Martina flashed her torch at the wall to illuminate a spider the size of a hand. At that point we scrambled fast to the exit.

We peddled on to the blue lagoon, encountering and fixing a puncture on the way. The lagoon featured the same turquoise waters of the waterfall, a deep stretch of water where trees and ropes formed swings as jumps. We spent most of the afternoon here in the beautiful waters. The boys jumped from a very high jump, maybe 6 metres above the water. We also found a fascinating plant growing in the water which waxy leaves didn't get wet no matter how much you splashed them. 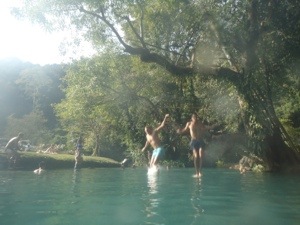 After a pleasant ride back we ended up enjoying reruns of friends over dinner that night.

The next day took along time to heat up but by 12pm the sun had broken through and we decided to go tubing. Getting in a tractors inner tube 4km up stream and following he current down used to have a more sinister meaning. Many backpackers flocked to the town and made use of the 10 riverside bars, zip lines and death swings on this part of the river. After many incidents this activity got shut down, however still exists today in a mild form. The tubers are still backpackers stopping for a beer and a game of volleyball at the three remaining bars, however the atmosphere is relaxed and enjoyable. The tubing back from the last bar was a long stretch and as the sun had gone behind the mountains it got very cold. We arrived back to the last bar and had to sit around the fire pit to warm up. 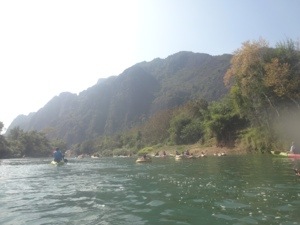 In the evening we went to our favourite baguette lady who gave us very favourable portions, but even then two baguettes were needed to quench our appetite!

We took the bus to Vientiene, Laos’ capital since the 16th century under French occupation. It is a very quiet capital with little to see however it’s large range of cuisines is the reputation which precedes it. Our first meal in the capital however was very disappointing, a little street food cafe with not much to say about hygiene! We spent the afternoon perusing the little streets before heading out to the night market. The market was on the banks of the river and across the water you could see Thailand. There were large groups of dance classes and loud music pumping out. We went for a very nice Indian meal then to a bar which overlooked the river. The crowd was a nice mix of travellers and locals and we whiled away a few hours and a few beer Laos before calling it a night.

Early morning we biked to the COPE centre a short ride out of town. This centre raises awareness of Unexploded Ordinances, or UXO’s and works to rehabilitate and revise prosthetics to those effected. The information was shocking though. Laos was victim to over 580,000 bombs during the Vietnam war, a war which they were not directly involved in. This number is larger than the amount of bombs dropped in WW2 by all sides. A shocking fact was that American soldiers who couldn’t find their target over Vietnam had offload zones over Laos so they could land safely when they returned the planes. This was another reminder that the decisions made in wartime have such a horrendous lasting effect long after peace has been made.

Many of those dropped were cluster bombs and up to 30% failed to detonate at the time. This causes 100’s of deaths and injuries in Laos every year from people farming the land or making fires which detonate the bombs. The stories were sad but the centre was so informative with a chance to try living with a prosthetic limb and experiments to understand phantom pain and other associated problems. The resourcefulness of the people was shown once again as the uses of these detonated bombs is endless, often made into lamps, cutlery and ironically prosthetic limbs. Unfortunately sometimes this serves to desensitise the children to the dangers of these things. Before we left we watched a film about the bombing. In rural Laos 70% of people have insufficient food so the limited safe farming space is a big problem. Fortunately groups are working to make the land safe, a positive message from a shocking film.

One of the left over marks of French influence is the lovely bakeries and coffee shops around the city. We decided to try one out for a mid morning treat and were not disappointed as we ordered pasties and brownies. By midday we were back at our hostel to catch the bus to Tha Khek. A short stay in Vientiane as we move south. As we pulled out of town we drove through the slightly grander parts of town passing Vientiane’s arc du triomphe which had the strange illusion of getting bigger as you drove away from it.

Next up Tha Khek, a little off the beaten track in Central Laos so not sure what to expect…