The drive from Whistler to Ashcroft BC involved a winding road up the Duffy, crossing the coastal mountains and down into desert.  It was enjoyed in 2nd gear, windows down with the warm afternoon breeze, wondering what my new venture entailed.  The destination was Sundance Ranch, a guest ranch with over 120 horses, situated in the Cariboo, cowboy country.

Despite difficult goodbyes, I felt welcomed into my new experience and quickly got acquainted with my roommate Rosie, and housemates Miki, Sophia and Maddy.  Over the next few weeks I would work serving guests in order to get an immersive experience into ranch life.

The first morning I picked my riding boots, a tan pair of dusty cowboy boots, a helmet and headed to the stables to meet my horse for my first ride.  Drifter was a beautiful mottled mare with easy temperament.  In order to ready her for the ride I was taught how to brush her clean, scrape her feet and tack her up in a western style saddle, before mounting up.  Our wrangler Ally led us out of the arena, down the airstrip and away to enjoy the expansive scenery on horseback.  The horizons spanned for miles.  Blue sky country had no end.  The only thing for perspective was the coal train snaking along either side of the river.  Dry sage brush and an array of tans and browns made up the lower part of the picture whilst the Thompson river rushed through. Hoodoos and rolling hills made for a huge contrast from the mountainous terrain lying just further west.  On each ride there is areas for the horse to run, so quickly we got to the question of cantering.  With the aim of staying with the saddle we began directing the horse in a line formation, kicking up dust while the horses took off.  It was an adrenaline rush and a challenge I was looking forward to facing with more skill over the next few weeks.

Over the following rides I was paired with Drifter again. Later Rocky who didn’t like rocks, and Diesel with his dark coat.  I enjoyed spending the time with the horses preparing for the ride whilst they stood patiently at the post.  Each time a different route would emerge at a panoramic opening on ‘Top of the World’ or ‘Skyride’ to later descend back into Sundance with its low lying buildings and sprawling fields. 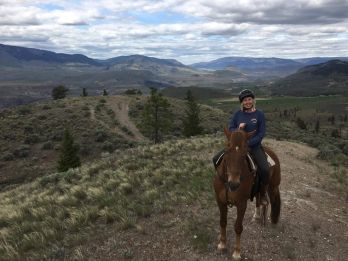 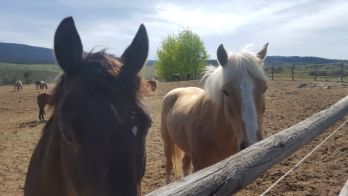 My first few shifts were maintenance.  We were put to work fixing fences, filling holes, collecting firewood and painting chairs. Soon however I got into a pattern of serving shifts, delivering food to the dining guests at mealtimes. The team was relaxed and the guests mostly regulars making for a fun working environment.  Outside of work times it was a social place to be.  Mealtimes were enjoyed together in the staff ‘cage’ served up by the chef at the same time everyday, so my appetite grew in anticipation of the delicious food.  Our next door neighbours had free roaming chickens who often played in the grassy undergrowth next to where we would lounge outside, or Sophia would lead us in yoga.  Other fauna included small snakes in the undergrowth and tics, one who made itself at home behind Rosie’s ear.

The scenery made for some challenging trail running, often complete with ankle scratches and clapping to make sure you didn’t stumble across a bear or worse…  Karel was training for a half marathon and challenged us to a two hour run one hot evening, following many of the routes the horses trek.  It was amazing to look out onto endless scenery and call it home for a while. 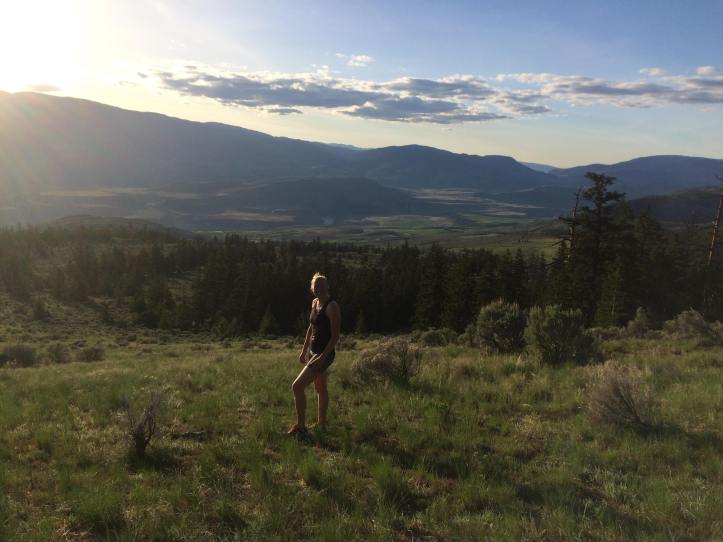 And so it began to feel like home for a while..