In May someone turned the temperature up on Ashcroft. We survived the early summer temperatures of it reaching 32 and being scorching dry heat in the midday sun. It was a quote from the local museum that early western settlers said ‘Its only a piece of brown paper settling Ashcroft from hell.” This is Canada’s only true desert and the hottest town in the country. Ashcroft was settled by the Cornwall brothers of Ashcroft, Gloucestershire in 1860 during the Cariboo Gold Rush.  They founded the town for other gold seekers as a place to saddle their horses and began to trade flour.  In 1874, construction of the Trans Canada railway line began and it became bustling with workers and passers by, growing to hold 3 hotels.  It became the northernmost point on the railway line before the track kicked east to Kamloops and as such, the railway brought Ashcroft business servicing the goldfields in the north.  In 1916 a fire blazed through timber heavy Ashcroft and it was the beginning of the end for the once booming town.  A new railroad heading north meant it was almost redundant.  Many years later it found its place growing tomatoes and potatoes in the volcanic soil.  Now it is a sleepy, quaint town firmly in ranch country, and with a good bakery, who can complain! 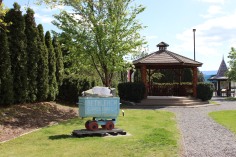 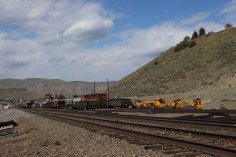 In order to see what the locals do, we headed to a rodeo in the nearby “town” of Deadmans Creek.  There was barrel racing, where the cowgirls had to negotiate their horse around three barrels before heading out of the arena.  This was followed by people being bucked from bulls, whisky racing and attempts to lasso and milk wild cows. The whole thing had a very other worldly, country vibe.  Many cowboy hats, boots and bootcut denim accompanied by the smell of BBQ.  The rodeo clown, Jason, had many outfit changes including an inflatable suit of a female sumo wrestler in a bikini and kept the audience laughing with his weird commentary. 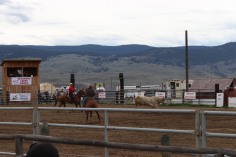 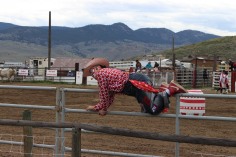 On another outing to meet the locals, we headed out to the rodeo dance in Clinton, another small town about 45 minutes away.  The popular game to play when driving through the town is to guess how many people you will see, as it is a rare sight to see.  On this occasion though, the gathering had brought many to enjoy some dancing in a large barn with an amazing band playing. Representing Sundance, we brought along some line dancing moves to take over the dance floor with.

As I continued to ride twice I week, I was introduced to steady Troy, the loveable ginger named Hug and the more energetic Benji.  The most exciting part of the rides came to be the runs.  The horses began to dance in ready excitement as we came across the next run spot ready to be asked to canter.

We had to say goodbye to Miki who had provided so much entertainment in our days.  Her artistic creativity had kept everyone amused as she made Maddy a private cinema, coined a cardboard planetarium and taught us the wacky world of Japanese Onomatopoeia.  As she left she gifted us some of her artwork, depicting us in amazing caracature likeness.

Hot afternoons signalled for poolside days and cooler evenings were perfect for strolling.  On one evening we followed the road as it wound on until Chi, the field where the retired horses live out their days gorging on grass.  Three old faithfuls greeted us, enjoying a good head scratch and a play.  In the warm dust of the road we stumbled upon, almost literally, two rattlesnakes. As the warm days continued more and more obscure sightings began to be told.  There was one discovered in a guest bedroom and quickly evacuated as well as a giant rattler down at the barn.  Suddenly, it was essential to be watching your every step!

One of the many ranch highlights each day was the jingle.  As anywhere up to 120 horses cantered past you from the stables to the field to enjoy a fresh feed overnight, plumes of dust were kicked up in their wake.  Originally it was so named as the leading horse would wear a bell.  I am coming to realise just how much personality these amazing creatures have.  The tight knit cliques are obvious whenever they graze together.  The rivalries, romances and friendships are more elaborate than any gossip magazine and as they prepare for the jingle their ears are back anticipating, ready to defend their position out of the gate and as such in the herd.  Sage and Dakota always get the biggest cheers from staff and guests as they go past bringing up the rear, sticking together. 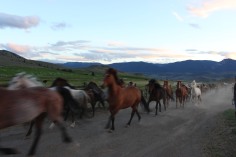 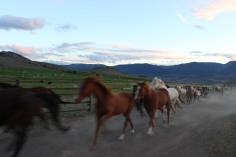